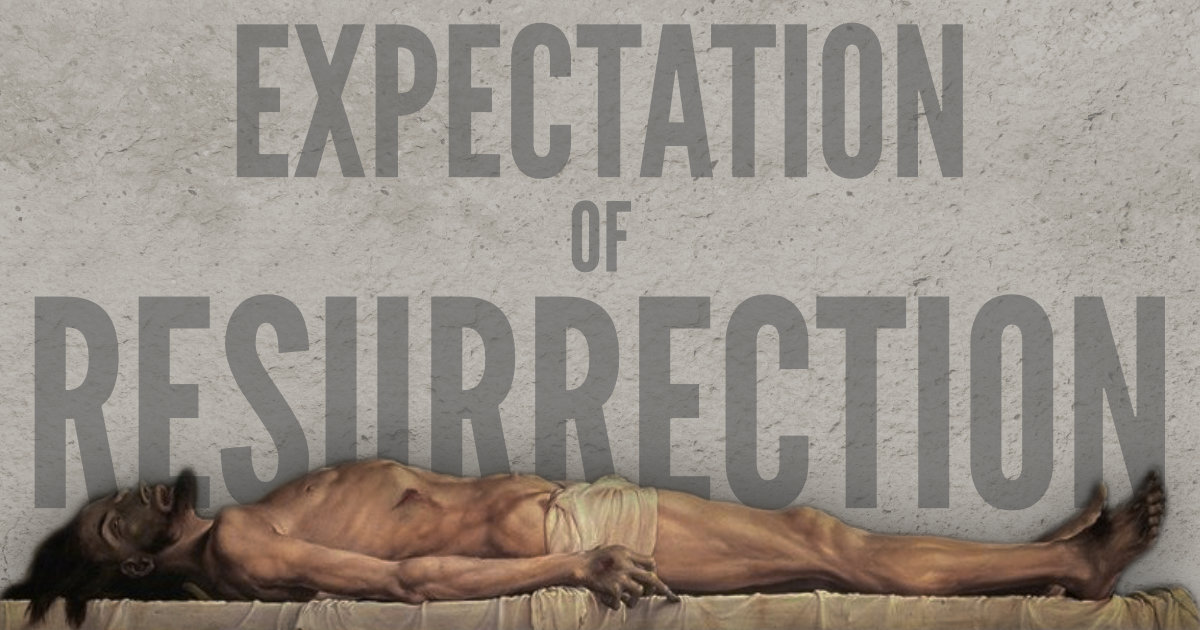 Our earliest historical documents describe Jesus as being physically risen from the dead. The earliest disciples did not believe in an apparition of Jesus, but in the resurrection of Jesus. Jesus wasn’t a phantom, but a physical person. Paul’s extremely early affirmation in 1 Corinthians 15 (“…He was buried… He was raised…”) assumes a bodily resurrection. If Jesus was buried, this would mean that his physical body was placed into the ground. Likewise, if he was raised, this would imply his physical body left the tomb. To a first-century Jewish author, the term “raised” referred to physical resurrection (cf. Jn. 20:24-28; Lk. 24:41-43).

But from where did these early disciples get this concept of a resurrected Messiah?

Did the concept of a dying and rising Messiah come from JUDAISM?

First-century Judaism simply had no concept for a dying and rising Messiah. According to the extrabiblical literature, the Jewish people were not expecting this at all.

The Jewish people did have a concept for an individual being “translated” directly into heaven. Several biblical and extrabiblical texts support this concept (Gen. 5:24; 2 Kings 2:11; Heb. 11:5; Testament of Job 40[1]). So, if they found that a body went missing, they might’ve thought it was a translation into heaven, but not a resurrection on Earth.

The Jewish people also had a concept for physical “resuscitation.” We see examples of this in the life of Elijah when he revived the young boy (1 Kings 17:21-23; cf. 2 Kings 13:21). But it was clear that these people still had a mortal body—doomed for death. Mortal resuscitation was different than immortal resurrection.

The Jewish people also had a concept for the general resurrection of the dead at the end of human history. Several Old and New Testament texts support this widespread Jewish belief (Dan. 12:2; Isa. 26:19; Jn. 11:24; Mk. 9:9-13). But here is the point: they had no concept for an individual resurrection before that time.

Various scholars affirm that the Jewish people had no concept for an individual resurrection before the end of history—let alone a resurrected Messiah:

Ulrich Wilckens (German New Testament critic): “Nowhere do the Jewish texts speak of the resurrection of an individual which already occurs before the resurrection of the righteous in the end time and is differentiated and separate from it; nowhere does the participation of the righteous in the salvation at the end time depend on their belonging to the Messiah, who was raised in advance as the ‘First of those raised by God.’ [1 Corinthians 15:20]”[3]

Even if a person was individually resurrected, the Jewish people had no concept for that person being the Messiah. After all, the Messiah came to judge Israel’s enemies—not be judged by them. The thought of a dying and rising Messiah was somewhat of an oxymoron to Jewish people at the time.

Did the concept of a dying and rising Messiah come from PAGANISM?

Atheistic documentaries like Brian Flemming’s The God Who Wasn’t There (2005), Peter Joseph’s Zeitgeist (2007), and Bill Maher’s Religulous (2008) have all espoused the view that the early Christians borrowed the concept of the resurrection from pagan myths about “dying and rising gods.” James G. Frazer popularized this view in his book The Golden Bough (1914),[4] though more recently, others have followed in his footsteps.[5]

The concept of Jesus being resurrected didn’t come from ancient myths; rather, this ancient myth about Jesus just keeps getting resurrected—being the myth that simply won’t die! For a thorough refutation of this view, see “Did Christianity Copied from Pagan Myths?”

But if the concept of the resurrected Messiah didn’t originate from Judaism or Paganism, then from where did it originate? We believe something climactic needed to occur to change the beliefs of these first-century Jewish people.

What caused these first-century Jews to change century-old beliefs overnight?

How strong are the religious beliefs of the Jewish people? These teachings and traditions are so impervious to change that they still persist and exist to this day. After all, we still have the Jewish faith, while almost all other faiths and ethnicities from that time have been lost to the ash heap of ancient history. Certain teachings and traditions rest at the core of Judaism, weaving into the very fabric of this ancient religion.

What sort of beliefs and practices are we talking about? The Jewish people in first-century Israel believed in (1) the weekly practice of Sabbath, (2) animal sacrifices (3) the indispensability of the Levitical priests, and most importantly, (4) the necessity of the Temple. But then, one day, a rabbi named Jesus of Nazareth died by crucifixion (along with tens of thousands of others during the same time period), and almost immediately after his death, thousands of Jewish people had a complete change of beliefs toward these four religious institutions.

Why? Why did these people choose to give up teachings and traditions that had existed for 1,500 years? According to the earliest sources, Jesus’ death and resurrection fulfilled all of these Hebraic rituals and traditions, and so, they simply felt no need for them.

It’s sometimes hard for modern people to grasp the power of religious tradition—being so flexible in our beliefs and worldview. But perhaps this illustration can help get us in the ballpark. Imagine a village of modern day Amish people suddenly abandoning their strict separatism for a lifestyle of technology and secularism. They burn their Bibles in the town square, and they religiously read Darwin’s Origin of Species on Sunday morning; they dismantle their horse and buggies, and they all buy Volvos and Volkswagens; they shuck their gingham clothes in favor of the spring line from Abercrombie and Fitch.

The same is true with regards to the resurrection: From where did the disciples get their belief about a dying and rising Messiah? We agree with Cambridge professor C. F. D. Moule when he writes, “If the coming into existence of the Nazarenes, a phenomenon undeniably attested by the New Testament, rips a great hole in history, a hole of the size and shape of the Resurrection, what does the secular historian propose to stop it up with?… the birth and rapid rise of the Christian Church… remain an unsolved enigma for any historian who refuses to take seriously the only explanation offered by the Church itself.”[6]

Conclusion: no one was expecting Jesus knocking at the door

If this fact of history is true, then a number of theories are in the hurt box! For instance, if one of the disciples hallucinated that he saw Jesus, this wouldn’t prove that Jesus was alive, but that he was still dead! In their worldview, Jewish people would be much more likely to believe in a ghost, than a resurrected person (see “Hallucination Theory”). Likewise, the idea that the disciples stole the body (see “The Conspiracy Theory”) doesn’t make much sense of this data, because no one would be predisposed to believing in a story like this.

[1] In this extrabiblical account, two Jewish children die when a house caves in. When the observers cannot find the bodies of the children, they teach that the children were taken directly into heaven.