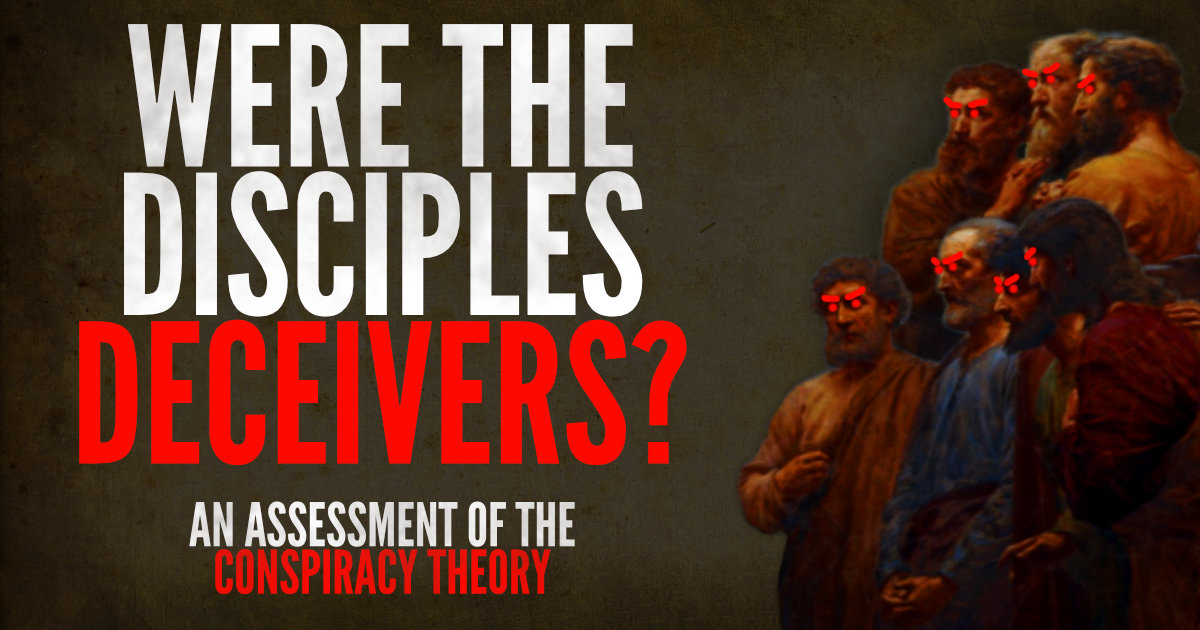 Proponents of this view[1] argue that the disciples intentionally stole the body, invented the resurrection story, and launched Christianity into existence. There are a number of difficulties with this view:

First, the NT contains this theory. Matthew records that the religious authorities bribed the guards to tell people that the disciples stole the body (Mt. 28:13, 15). It would be odd for the NT authors to mention the very lie that they were covering up. They must not have thought that this theory carried any weight.

Second, the disciples—or their contemporaries—had no theological expectation for a dying and rising Messiah. As we have already seen (see “Expectation of Resurrection”), the concept of a dying and rising Messiah didn’t exist in first-century Israel. If the disciples were deceivers, then why didn’t they pick a story that would fit with the theological consensus of their culture?—or any other culture for that matter? As Paul writes, “We preach Christ crucified, to Jews a stumbling block and to Gentiles foolishness” (1 Cor. 1:23; cf. Acts 17:31-32).

Third, Jesus’ closest disciples went through a radical transformation. Take Peter for example. Before the resurrection, Peter denied Christ three times (Mt. 26:69ff; Mk. 14:66ff; Lk. 22:55ff; Jn. 18:25ff).[2] He even denied Jesus to a slave-girl. (It doesn’t even say that she was a big girl or a particularly strong girl—just a little girl!) Yet, just over seven weeks later, Peter taught to thousands of people and wouldn’t buckle under the pressure of the religious authorities who put Jesus to death (Acts 2-4). This infusion of courage seems to make the most sense if Peter saw that Jesus had conquered death, and there was no reason to fear people.

Fourth, Jesus’ closest disciples didn’t benefit from deceiving others. Unlike fraudulent religious leaders today, Jesus’ closest disciples didn’t benefit from following Christ. They didn’t gain sex (1 Cor. 9:5), money (1 Cor. 4:11), or comfort (2 Cor. 11:23-29). Instead, they paid for their convictions with their very lives (see “Eyewitnesses”). William Lane Craig writes, “If we distrust these men, then we must distrust all writers of history and records.”[3]

Fifth, this theory has been virtually abandoned by critical scholars for roughly 200 years. Craig records, “I cannot emphasize strongly enough that no modern biblical scholar would for a moment entertain the theory that the disciples conspired together to steal the corpse and then lie about the resurrection appearances… The theory has been dead for nearly two hundred years.”[4]

[2] This passes both the criteria of embarrassment and multiple attestation.

[3] William Lane Craig, The Son Rises: The Historical Evidence for the Resurrection of Jesus (Eugene, OR: Wipf and Stock Publishers, 2000), p.25.

[4] Emphasis mine. William Lane Craig, The Son Rises: The Historical Evidence for the Resurrection of Jesus (Eugene, OR: Wipf and Stock Publishers, 2000), p.36.