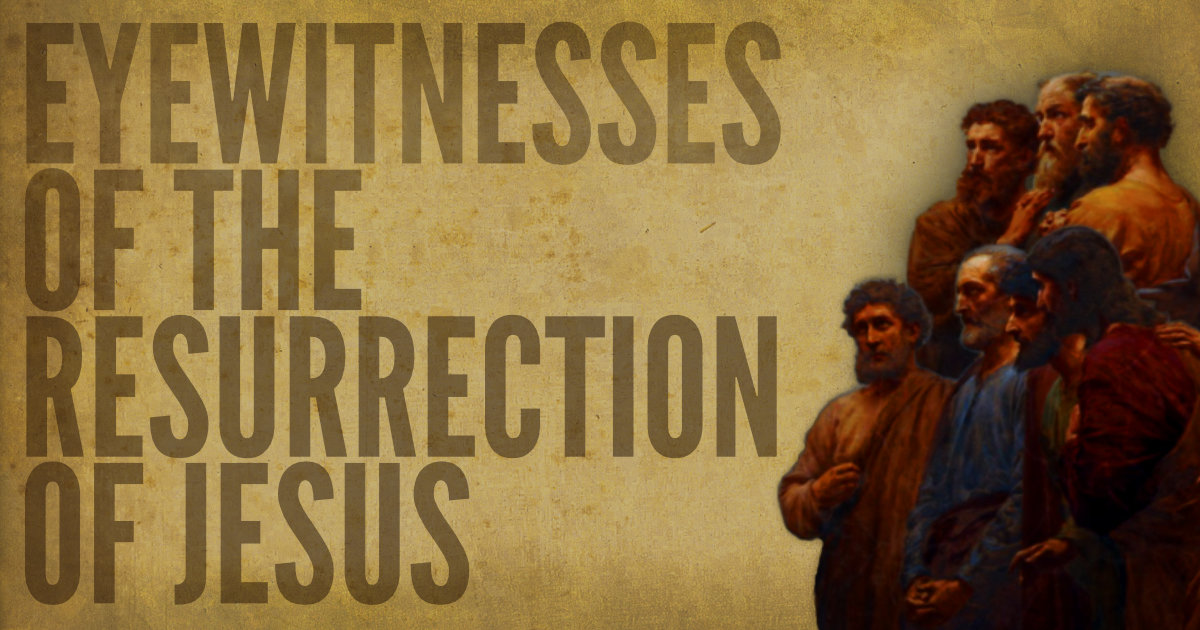 It may surprise you to read, but even atheistic, critical scholars agree that the disciples had sincere experiences that they believed were Jesus risen from the resurrection:[1]

Gerd Lüdemann (atheistic NT professor at Göttingen): “It may be taken as historically certain that Peter and the disciples had experiences after Jesus’ death in which Jesus appeared to them as the risen Christ.”[2]

Bart Ehrman (atheistic NT scholar): “It is undisputable that some of the followers of Jesus came to think that he had been raised from the dead, and that something had to have happened to make them think so.”[3]

Gary Habermas (Christian historian and philosopher): “It seems clear that the disciples were utterly persuaded that the risen Jesus had appeared to them.  The data are strong enough that this is granted by virtually all critical scholars.”[5]

Why would the vast majority of critical scholars affirm that the disciples sincerely believed that Jesus appeared to them after his death? The historical data are solid:

Second, Jesus appeared to groups—not just individuals. 1 Corinthians 15 notes that Jesus appeared “to the Twelve… and to more than five hundred” (1 Cor. 15:6). Likewise, the gospels also report that Jesus appeared to groups—not just individuals. It would be counterproductive for Paul to mention 500 eyewitnesses of the resurrection, if they were not alive to corroborate his account. C. H. Dodd writes, “There can hardly be any purpose in mentioning the fact that most of the 500 are still alive, unless Paul is saying, in effect, ‘The witnesses are there to be questioned.’”[6]

(2) James—Jesus’ half-brother. James was not a believer in Jesus, and it’s easy to sympathize. Craig writes, “Many of us have brothers. What would it take to make you believe that your brother is the Lord, so that you would die for this belief, as James did? Can there be any doubt that the reason for this remarkable transformation is to be found in the fact that ‘then he appeared to James?’”[8]

James had been downright dogmatic in his disbelief. Originally, he thought Jesus was “out of his mind” (Mk. 3:21 NIV). Along with the rest of his brothers, James urged Jesus to travel to Judea, so that the religious leaders would kill him (Jn. 7:3-5). Nevertheless once James saw his brother risen from the dead (1 Cor. 15:7), he dedicated his adult life to following him. He became an “apostle” (Gal. 1:19) and a “pillar” of the early church (Gal. 2:9). The historical data about James carry heavy weight, because they would be embarrassing to record about one of your central leaders in Jerusalem. This is why even skeptical NT critics consider James to be one of the strongest evidences of Jesus’ resurrection.[9]

Moreover, when a feigned leader was killed by the authorities, the disappointed movement would usually fashion their hope on the dead leader’s brother or closest relative. Yet James receives not even a mention of this. Instead, James becomes a radical follower of his crucified brother.[10]

(3) James—the half-brother of Jesus. The Roman historian Josephus records that the Sanhedrin had James stoned to death.[13] Later Christian authors add that James was “thrown from the pinnacle of the temple” and “beaten to death with a club.”[14]

In 1963, a Buddhist monk doused himself in gasoline and burned himself alive to protest the persecution of Buddhists in South Vietnam.[15] In 2001, Muslim extremists flew airplanes into the World Trade Center, believing that paradise awaited them. Between the years of AD 62-67, Paul, Peter, and James suffered horrific martyrdom because they believed in Jesus of Nazareth.

None of this demonstrates whether these beliefs are true, but it does demonstrate that the person truly believed them. To put this another way, martyrdom doesn’t show the veracity of our beliefs, but it does show the sincerity of our beliefs! Beyond painful martyrdom, what greater evidence could we ask for? These men signed their testimony in their own blood, and it’s safe to say that liars make poor martyrs!

But here we must make a clear distinction: Unlike other radically committed religious people today, the disciples claimed to see Jesus alive from the dead with their own eyes (1 Cor. 9:1; 15:5-8; 2 Pet. 1:16). They weren’t sincerely believing a story that someone told them; they were sincerely telling us the story. Therefore, their claim is not merely that they were sincere about their beliefs, but rather, their claim was that they had seen the risen Jesus personally.

Conclusion: what did these men see?

What led Jesus’ closest disciples to suffer under torture and death? What did they see that changed them from denying Jesus to dying for Jesus; from persecuting Christians to promoting Christianity; from being skeptical about Christ to being stoned for Christ? What is the best explanation for these historical facts?

[2] Of course, Ludemann chalks this up to a hallucination or vision. Gerd Lüdemann and Alf Özen, What Really Happened to Jesus: a Historical Approach to the Resurrection (Louisville, KY: Westminster John Knox, 1995), 80.

[3] Of course, Ehrman believes that these were “visionary experiences,” not veridical experiences. He writes, “Our earliest records are consistent on this point, and I think they provide us with the historically reliable information in one key aspect: the disciples’ belief in the resurrection was based on visionary experiences. I should stress it was visions, and nothing else, that led to the first disciples to believe in the resurrection.” Bart D. Ehrman, How Jesus Became God: The Exaltation of a Jewish Preacher from Galilee (New York: Harper One, 2014), 183-184.

[4] Interview on ABC with the late Peter Jennings for his documentary The Search for Jesus (July 2000). https://www.youtube.com/watch?v=iIG007Zxqy8&list=PLD6FE5E6AE7F5266B&index=7

[5] Gary Habermas, Experiences of the Risen Jesus: The Foundational Historical Issue in the Early Proclamation of the Resurrection. Originally published in Dialog: A Journal of Theology, Vol. 45; No. 3 (Fall, 2006), pp. 288-297; published by Blackwell Publishing, UK.

[12] See 1 Clement 5:4-5; Tertullian, Ecclesiastical History, 2:25.5; Caius & Dionysius of Corinth, 2:25.8. Origen (AD 250) is where we first read about the spurious account that Peter was crucified upside down: “Having come to Rome, [Peter] was crucified head-downwards; for he had requested that he might suffer in this way” Origen’s third volume of his Commentary on Genesis, cited in Eusebius, Ecclesiastical History, 3.1.2. Later traditions repeat this claim, but this is its origination.

[14] Clement of Alexandria and Hegesippus in Eusebius, Ecclesiastical History, 2.23.