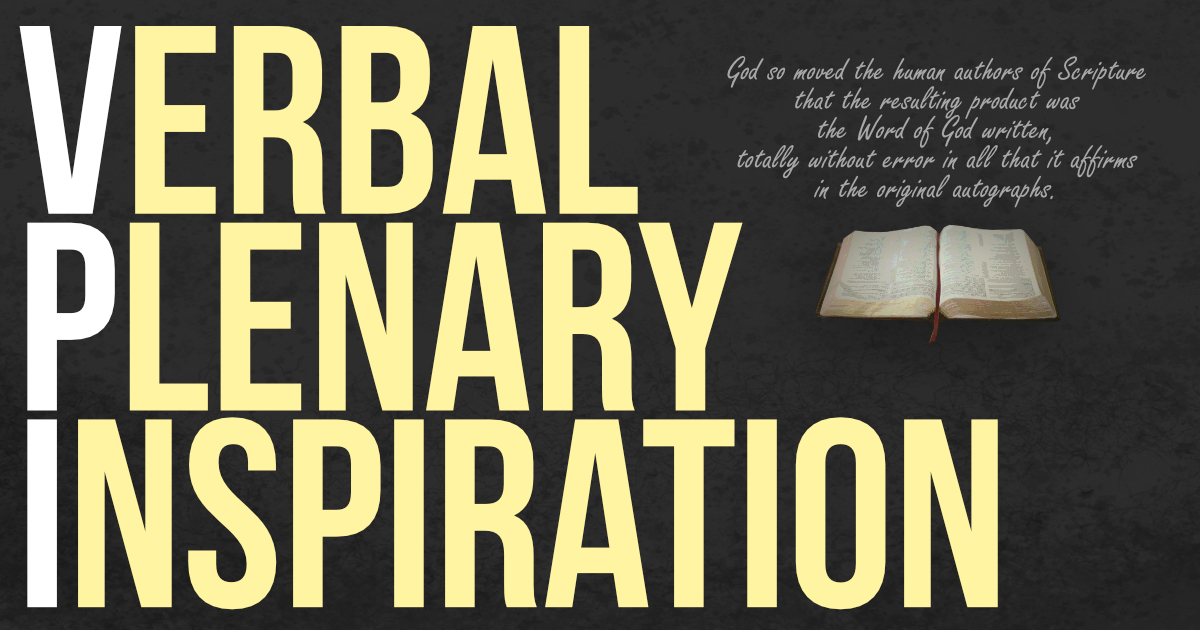 Our view of inspiration is called Verbal Plenary Inspiration (VPI). A generally accepted definition for VPI is this: God so moved the human authors of scripture that the resulting product was the Word of God written, totally without error in all that it affirms in the original autographs. We can expound this definition biblically in this way:

The Bible’s words are God-breathed. Inspiration literally means “to breathe into.” This comes from the Greek term theopneustos (pronounced thay-op-NEWS-toss). Paul writes that “all Scripture is God breathed” (2 Tim. 3:16). Notice that this verse teaches that it is the actual words themselves which are inspired, not merely the men, who were inspired. Peter writes that the words of the prophets were often a mystery to the authors themselves, which shows their divine origin (1 Pet. 1:11). God led humans to write the Scriptures (2 Pet. 1:20-21). The Holy Spirit can speak through people (Mk. 13:11). Paul even refers to his own words as the “word of God” (1 Thess. 2:13).

While the Bible makes a clear claim for VPI, how can we hold to this position without circular reasoning? Do we need to take this on faith, or are there good reasons for believing in the Bible’s inspiration? Let’s consider many ways that inspiration is often poorly argued by believers:

ARGUMENT #1: “The Bible is inspired because it claims to be inspired.”

This is a clear case of circular reasoning. The Quran and the Book of Mormon also make the same claim (see “Islam” and “Mormonism”). How do we know if these claims are true?

ARGUMENT #2: “The Bible is internally consistent. Roughly 40 or so authors wrote a consistent story over thousands of years.”

The Bible isn’t the only book that is internally consistent. The Lord of the Rings is internally consistent, but it isn’t inspired. While it is impressive to see such a coherent message from so many different authors over so many years, critical scholars claim that this was because redactors pieced the story together later, or ecclesiastical councils omitted or added books to fit their theological agenda (for a refutation of this view, see “The NT Canon” and “The OT Canon”).

ARGUMENT #3: “I believe the Bible is inspired by God because its contents resonate with me.”

The Bible does claim that it will resonate with us (Jas. 1:22; Jn. 7:17), but this is too subjective to bring us to VPI. People “resonate” with occult literature, new age literature, and many other perspectives. This doesn’t prove these texts true. Moreover, what if something in Scripture didn’t “resonate” with the reader? Would this make it false?

This is true (see “Predictive Prophecy”), but at most, this proves that some portions of Scripture are inspired—not everything within it. While the prophetic portions might be shown to be inspired, this doesn’t prove that Jonah was in the whale for three days, or that Lot’s wife turned into a pillar of salt.

ARGUMENT #5: “The Bible is historically and archaeologically reliable.”

While the Bible is reliable in regards to history and archaeology, this doesn’t make it inspired. There are accounts of the Civil War that are reliable, but these are not inerrant or inspired.

Truly none of these arguments bring us to VPI. In fact, they don’t even get us close. What then should be our methodology in establishing such an important position on the inspiration of Scripture?

The Case for Verbal Plenary Inspiration

In order to form a case for VPI, we first need to build a case for Christ. That is, we should first look at what Jesus believed about Scripture, and then, we will adopt his perspective on it. If Jesus (God) believed that Scripture was completely and totally inspired, then we should adopt his view.

By contrast, we wouldn’t say that we believe in Jesus, because we believe in VPI. This case would be enormously difficult to argue! (Imagine if you had to go through the entire Bible with a fine-tooth comb, arguing every discrepancy, before you could believe in Christ) Instead, we are given excellent evidence for the deity of Jesus of Nazareth, and if he was God, then we should listen to his view of inspiration. In building this case for VPI, we follow four successive steps:

1. Historicity: Is there good evidence for believing the NT documents are historically reliable? How do they compare to other ancient documents?

2. Deity: If we have a good historical record, we should ask the question: Did Jesus believe he was God? Here we appeal to Jesus’ self-understanding in the four gospels, and what the disciples believed about Jesus?

3. Rationality: If we have a good historical record that Jesus claimed that he was God, we should ask another question: What reasons do we have for supporting this claim? Here we need to appeal to apologetics and arguments for Jesus’ deity.

4. Inerrancy: Once we have established good evidence for Jesus being God, we need to ask one final question: What was Jesus’ perspective on Scripture? Whatever view Jesus held, we should hold as believers.

We believe this four step case gives us a non-circular argument for the inspiration of Scripture. Consider each portion step by step:

There is sufficient evidence that the gospels and epistles accurately record what Jesus said and did. There are three tests in which all historical source documents are subjected to determine their reliability:

A. The Bibliographical Test

B. The Internal Test

We make a case for the reliability of the NT in our earlier article: “Historicity of the NT.”

Once we establish the reliability of the NT documents, we should ask what Jesus thought about himself: Did Jesus believe that he was God? We have argued elsewhere that the NT overwhelmingly teaches that Jesus thought that he was divine (see “Defending the Deity of Christ”).

Jesus claimed that he was God, but what evidence do we have to support his claims? We feel that there are at least three lines of evidence that are persuasive toward this end:

2. The resurrection of Jesus (see “Defending the Resurrection”).

There is abundant evidence that Jesus is who he said he was: God incarnate. Thus if God came to Earth, it is consistent for us to hold to his views on Scripture. This brings us to our final step in our argument for inspiration.

First, Jesus had a high view of the OLD TESTAMENT. He said, “Do not think that I have come to abolish the Law or the Prophets; I have not come to abolish them but to fulfill them. I tell you the truth, until heaven and earth disappear, not the smallest letter, not the least stroke of a pen, will by any means disappear from the Law until everything is accomplished” (Mt. 5:17-18). R. Laird Harris writes,

The ‘smallest’ letter was the Hebrew ‘Yodh,’ the smallest letter in the Hebrew alphabet. Just what is meant by the ‘least stroke of the pen’ is less clear. Most take it to refer to the small parts of Hebrew letters which distinguish one from the other, like our dot over the ‘i’ and cross of the ‘t’.[1]

Third, Jesus had a high view of the APOSTLES WORDS. Regarding the ministry of the apostles, he said, “He who receives you receives me, and he who receives me receives the one who sent me” (Mt. 10:40). He predicted that the Holy Spirit would remind the disciples of everything that he taught, so that they could write Scripture (Jn. 14:26; 15:26-27; 16:13).

Later, the disciples believed that they were writing Scripture. The disciples viewed their own writing as Scripture. For instance, Paul writes, “What I am writing to you is the Lord’s command” (1 Cor. 14:37). He told the Thessalonians, “When you received the word of God, which you heard from us, you accepted it not as the word of men, but as it actually is, the word of God” (1 Thess. 2:13). The apostle John frequently argued that his apostolic teaching was from God, while his Gnostic opponents were not (1 Jn. 4:4-6).

Moreover, the disciples quoted one another as inspired authors of Scripture. For instance, Paul cites Luke 10:7 as “Scripture” (1 Tim. 5:18). Paul regarded his own writing as Scripture as well. Likewise, Peter refers to Paul’s letters as Scripture. He writes, “Just as our dear brother Paul also wrote you with the wisdom that God gave him. He writes the same way in all his letters, speaking in them of these matters. His letters contain some things that are hard to understand, which ignorant and unstable people distort, as they do the other Scriptures, to their own destruction” (2 Pet. 3:15-16).

As believers, we come to know God in many different ways. But if we are to show others why we believe in Scripture, we need to have a carefully reasoned case. This case also serves the believer by giving her the ability to secure her faith on a solid, rational foundation. As C.S. Lewis writes,

It is not reason that is taking away my faith: on the contrary, my faith is based on reason. It is my imagination and emotions. The battle is between faith and reason on one side and emotion and imagination on the other. When you think of it you will see lots of instances of this… A man knows, on perfectly good evidence, that a pretty girl of his acquaintance is a liar and cannot keep a secret and ought not to be trusted: but when he finds himself with her his mind loses its faith in that bit of knowledge and he starts thinking, ‘Perhaps she’ll be different this time…’ And once more makes a fool of himself and tells her something he ought not to have told her. His senses and emotions have destroyed his faith in what he knows to be true… That is why Faith is such a necessary virtue: unless you teach your moods ‘where they get off’, you can never be either a sound Christian or even a sound atheist, but just a creature dithering to and fro, with its beliefs really dependent on the weather and the state of its digestion. Consequently one must train the habit of Faith.[2]

When our feelings and emotions fail us, we need something to fall back on. Thus, this case is not only cogent for demonstrating our faith to others, but serves as a bedrock for securing our own faith in Scripture.

Harris’ treatment on the inspiration and the canonization of the Bible is the best scholarly work out today. Unlike F.F. Bruce’s view (see The Canon of Scripture), Harris holds that the canon was predicated on the inspiration of the books themselves based on authorship—not church councils. Bruce holds that the canon wasn’t “officially” held until the lists were created by the church fathers. Harris offers a careful critique of Bruce, and he offers good evidence for his case based on the authorship of the books—either prophetic authority in the OT or apostolic authority in the NT.

Geisler and Nix’s treatment is a far easier text to read than Harris (In fact, an even easier version is From God to Us by Geisler and Nix). These authors clearly explain the evidence for the canon, inspiration, and inerrancy of the Bible. It is not as in-depth as Harris.