Listen to the Audio Book Here! 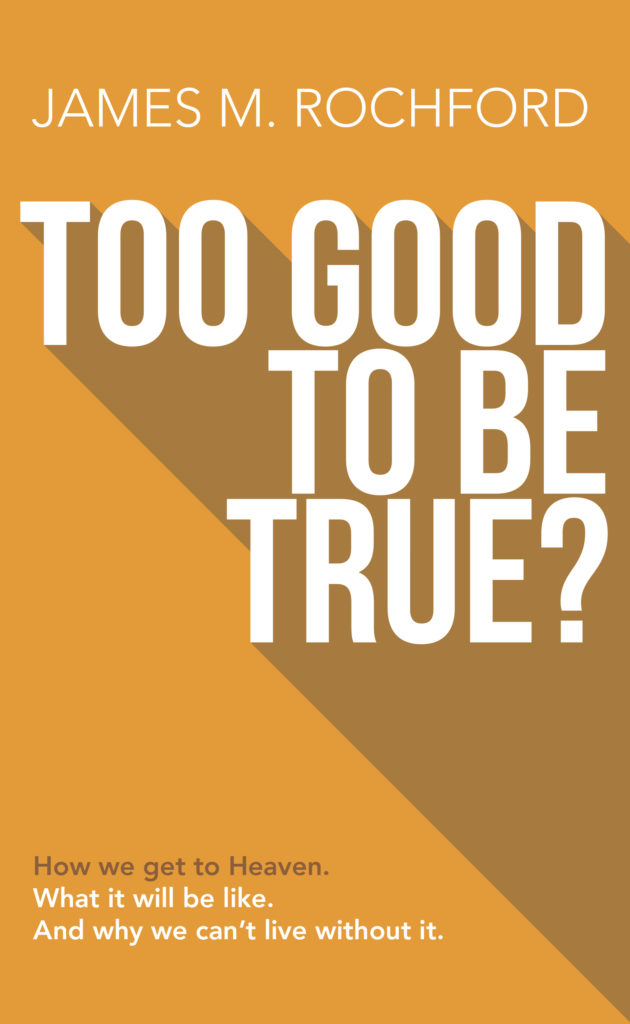 The average American lives for 78 years. While that might seem like a long time, the Bible describes it as “a breath” compared to eternity. Many live their whole lives never knowing where they’re going when their time is up. One of the wisest men who ever lived once wrote, “A wise person thinks a lot about death, while a fool thinks only about having a good time.” Wouldn’t it be worth setting aside a couple of hours to read this book and explore what your life is all about?

Chapter 7: What happens seconds after death? 69 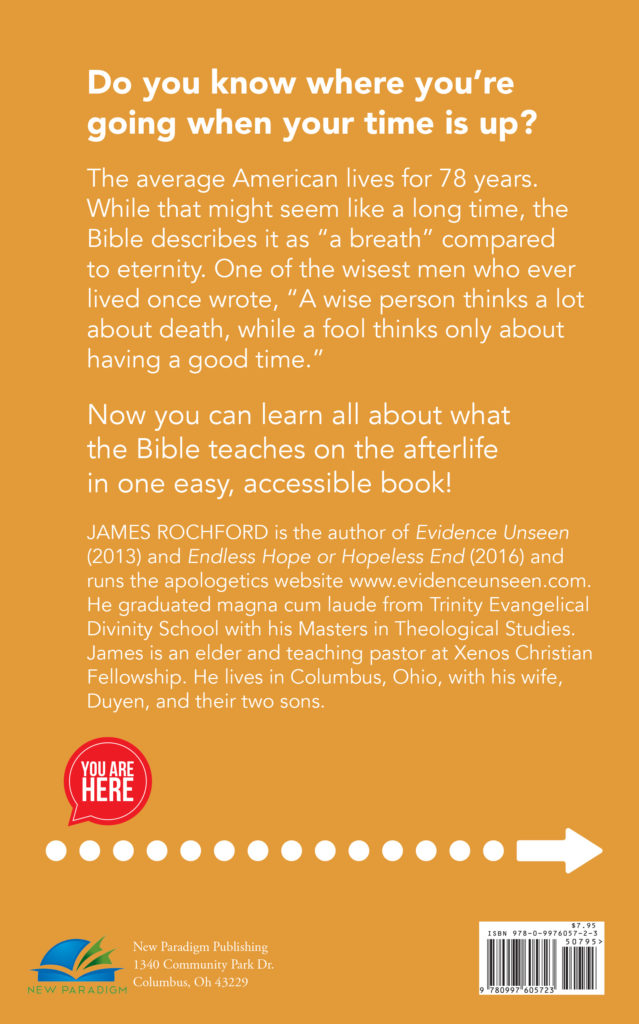 Chapter 1: Something is missing

Do you ever get the feeling that something is missing?

Advertisers claim to have the answer, clamoring endlessly like a friend who had too much to drink. Commercials capitalize on the sense that we’re missing something: a bigger house, a nicer car, smoother skin, tighter abs, or a firmer butt. Yet we never quite feel fulfilled—or filled full—by such things. At least, not for long. Even after a string of purchases that vague sense of emptiness sets in.

Something is missing, but what? We might yearn for the ecstasy of romance, but when the thrill is gone, we feel even lonelier than before. We cycle through relationships like a merry-go-round, but when the music stops, we don’t feel “merry.” Even when we’re engulfed by the loud music of a night club or the laughter of a party, a fleeting feeling of alienation returns. (It’s surprising how lonely we can feel even in such crowded places!)

Henry David Thoreau once wrote, “The mass of men lead lives of quiet desperation… Unconscious despair is concealed even under what are called the games and amusements of mankind.”[1] The term “a-muse” literally means “not thinking,” and amusement has only multiplied since Thoreau wrote these words in 1854. Instead of quiet reflection, we prefer the stimulation of a flat screen; rather than sitting in silence, we reach for our headphones; and in the place of intimate conversation, we multiply friendships on social media.

As we grow older, we reminisce about old friends and family—periods of life claimed by the past. As children grow up and move out, we’re left with a quiet house and our memories. What was once a roaring fire becomes a mound of embers and finally ashes.

Some people deny that anything is missing in their lives. Of course, no one can force you to admit something is missing. The old adage still rings true: “A man convinced against his will is of the same opinion still.” But I would ask you a very simple question:

Are you really satisfied with your life and the decisions you’ve made? Are you really content with your relationships and how they’ve turned out? Is another promotion or another purchase really the answer? Will a change of ZIP code really change everything? At the very least, we can look to innumerable people who have had all of their earthly desires fulfilled, yet still yearned for more.

Eric Clapton (musician): “I had everything a man could want even then. I was a millionaire. I had beautiful women in my life. I had cars. A house. An incredible, solid-gold career. And a future. And yet, on a day-to-day basis, I wanted to commit suicide.”[2]

Tom Brady (NFL quarterback with four Super Bowl rings): “[Why do I] still think there is something greater out there for me? …I think, ‘God, there’s got to be more than this!’”[3]

Halle Berry (actress): “Beauty is essentially meaningless, and it is always transitory.”[4]

Josh Radnor (actor, How I Met Your Mother): “I had bought into the not-uncommon notion that when I taste success, when I get ‘over there,’ then I’ll be happy. But the strangest thing happened: As the show got more successful, I got more depressed.”[5]

Cameron Diaz (actress): “If you are looking for fame to define you, then you will never be happy. You will always be searching for happiness. You will never find it in fame.”[7]

Tony Hale (actor, Arrested Development): “I kept thinking, ‘Oh that sitcom is coming…’ And when I got it… I mean, I won’t say it was a depression, but you kind of go through a disappointment. Because that fame didn’t satisfy the way you thought it was going to satisfy.”[8]

Are you determined to find fulfillment in the pleasures of this world? Good luck. You’re pursuing a goal that has never been achieved by the billions of people before you. You’ll never find it, because there’s nothing to find.

Do you know what Jesus’ first words were in the gospel according to John? He asked this question: “What do you seek?” (Jn. 1:38) Two thousand years later, those haunting words still confront us. What exactly am I looking for? What do I want? Fame? Money? Power? A new car? A bigger house or a nicer spouse? What will finally satisfy my soul?

Is there life after death?

Modern medicine continues to astound us. We live in an age of bionic limbs, viral vaccinations, skin grafts, and heart transplants. Yet despite our scientific progress, humanity still has a 100 percent mortality rate—no one is getting out of here alive. We might live for eighteen years or eighty, but death remains a certainty.

But is there something after death?

Our earliest ancestors surely thought so, placing flowers in the graves of their dead.[10] One grave dating to ~25,000 years ago contains the bodies of two children, laid head to head, with their hands placed gently over their pelvises. Anthropologists tell us that the 250 fox teeth and 5,000 ivory beads adorning their small bodies must have taken around 2,500 hours to create.[11] While we don’t know much about our ancient ancestors, we do know this: they spent considerable time, talent, and treasure on their funerals.

According to the authoritative Encyclopedia of Religion and Ethics, even the oldest and most primitive human cultures believed in the afterlife:

No subject… has so engrossed the mind of man as that of his condition after death…. There is every reason to believe that they regarded the dead as still carrying on some kind of existence…. [Primitive people] had thought much about it…. There are very few [primitive] peoples who believe in utter extinction.[12]

Millennia later, modern people still walk in their footsteps. Belief in life after death persists in virtually every culture and civilization on Earth. Scholar Alan Segel writes, “Most, if not all, of the world’s cultures maintain some sort of belief in life after death.”[13] In fact, even amid modern skepticism, three out of four Americans continue to believe in Heaven.[14]

We might wonder why so many people from so many different cultures and eras of history would believe in life after death. After all, the afterlife cannot be empirically tested or scientifically proven—so why do so many people believe in it?

Humanity’s hope isn’t the result of a collective delusion or an anthropological abnormality. Such explanations don’t explain this phenomenon; instead, they attempt to explain it away. The Bible tells us, “[God] has planted eternity in the human heart” (Eccl. 3:11 NLT). This is the real explanation for why humans have always believed in an afterlife, and if true, it means nothing in this world will ever ultimately satisfy us. We were made for another world: Heaven.

The denial of death

Nothing is more certain than death, but oddly, nothing is more strange or shocking. For such a normal process, death still feels so abnormal—so wrong. Psychologist Frederic Neuman observes,

There is something about death. In an odd way death seems unnatural—uncanny, almost, because it is so far outside our experience. And so abrupt… Even when a woman is 93 years old, and has been dying for months, her death seems sudden… When that person is loved, and needed, death always seems premature. And unexpected. So, it seems to me sometimes that no one dies a natural death.[15]

The grisly certainty of death drives many people in Western culture to avoid the subject altogether. Even our language tries to camouflage this gruesome reality: We don’t place our dead in coffins anymore, but in caskets; we no longer send our dead to morgues, but to funeral homes; in fact, instead of dying, our loved ones merely pass away or depart.

Of course, we can change our vocabulary all we want, but death doesn’t change. Death doesn’t pay attention to our softened synonyms or even our outright denial. Death stalks each one of us—undeterred. No matter how much the mortician manicures and perfumes the body of our loved one, he doesn’t have the power to bring him or her back to life.

So what should we make of death? Should we merely “make friends with the necessity of dying”[16] as some atheistic thinkers have argued? Not at all! Death is an enemy of the human race—not a friend. The Bible tells us that “the last enemy that will be abolished is death” (1 Cor. 15:26), and Jesus “set free all who have lived their lives as slaves to the fear of dying” (Heb. 2:15 NLT). Jesus tells us, “I hold the keys of death” (Rev. 1:18 NIV) and, “I am the resurrection and the life; he who believes in Me will live even if he dies” (Jn. 11:25). Death could not hold Jesus in its powerful grip (Acts 2:24), and it will not hold us either.

Jesus is the only person who knows how to get to Heaven, because he is the only one who has ever “come down from Heaven” (Jn. 6:38); and according to him, this life is not the end—only the beginning. A split second after you die, you stand face to face with your Creator.

And then, eternal life will begin.

The average American lives about 78 years. But many live that entire time without knowing what their purpose is, or where they’re going when their time is up. One of the wisest men who ever lived once wrote, “A wise person thinks a lot about death, while a fool thinks only about having a good time” (Eccl. 7:4). Wouldn’t it be worth spending a couple of hours to read this book and explore what your life is all about?

[16] Sigmund Freud, “The Theme of the Three Caskets.” The Standard Edition of the