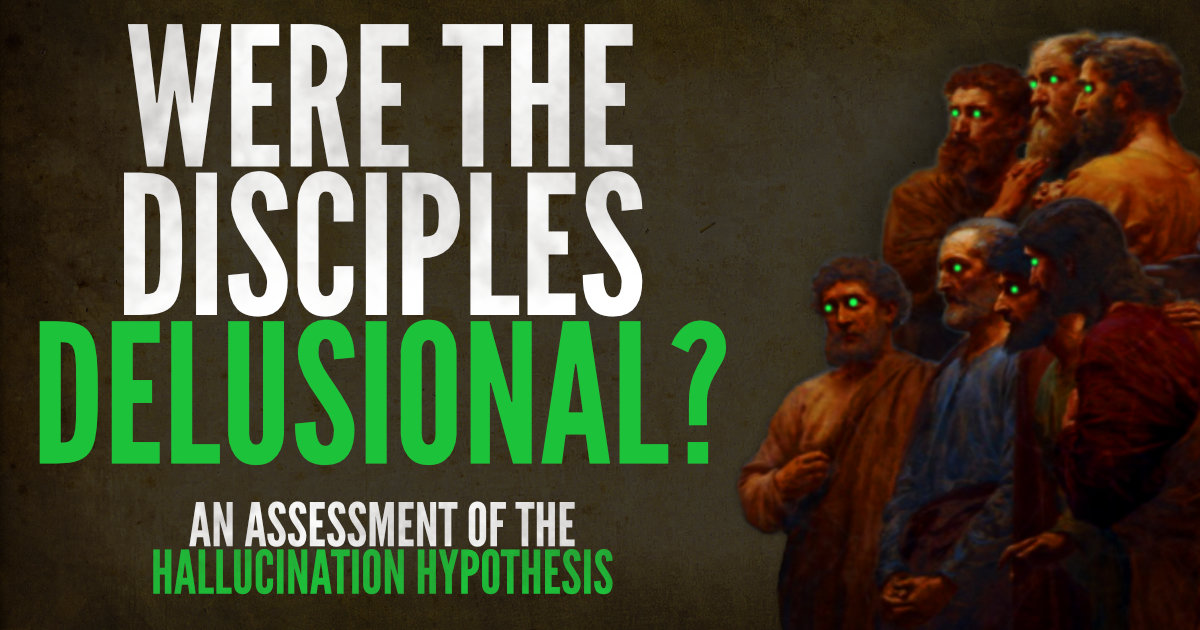 Proponents of this view contend the disciples hallucinated the risen Jesus. After all, hallucinations occur all the time, but resurrections do not. These critics argue that Jesus did appear to his disciples after death, but he only appeared to appear. Several counterarguments can be leveled at the hallucination hypothesis:

First, hallucinations are mental—not actual—events. Imagine if someone told you, “I had a dream about you last night, and we got married in Vegas!” You might laugh at their dream, but imagine if they continued to say, “So, where would you like to go for our Honeymoon tonight when we fall back asleep?” Not only is this a creepy question, but it also shows something very important: dream states exist in the mind—not in reality. Similarly, hallucinations exist in the mind—not in reality.

This creates obvious problems for the hallucination hypothesis. After all, this would require six different groups (1 Cor. 15:3-8) and 530 different people to all have the same hallucination of Jesus risen from the dead. Needless to say, if such a coincidental event happened, this would be more miraculous than the resurrection itself!

Second, scientific data are lacking for group hallucinations. Jesus appeared to at least three groups of people: “the Twelve… and the five hundred… all the apostles” (1 Cor. 15:6-7). Yet group hallucinations are nearly impossible. Psychologists Andre Aleman and Frank Larøi arguably wrote the most comprehensive texts on the psychology of hallucinations, which is called Hallucinations: The Science of Idiosyncratic Perception, (American Psychological Association, 2008). The book covers over a century of research. Yet with regard to group hallucinations, the book contains nothing. They explained why they didn’t write on group hallucinations. It was because there is “very little (scientific) documentation on this topic.”[1] Likewise, psychologist Gary A. Sibcy wrote, “I have surveyed the professional literature (peer-reviewed journal articles and books) written by psychologists, psychiatrists, and other relevant healthcare professionals during the past two decades and have yet to find a single documented case of a group hallucination, that is, an event for which more than one person purportedly shared in a visual or other sensory perception where there was clearly no external referent.”[2] After all, if hallucinations exist in the mind as mental events, how could others share these same mental events?

Imagine the improbability of someone taking acid, hallucinating that a giant pink bear was skipping through a meadow and smelling flowers. (“That’s not that improbable,” you might retort.) But now, imagine four people dropping acid and all imagining the same bear and the same meadow and the same flowers. Now imagine 500 people? Such a mass hallucination is considered to be medically impossible.

Fourth, the hallucination theory doesn’t account for the expectation of resurrection. Again, for the sake of argument, let’s assume everyone hallucinated Jesus risen from the dead. But, we must ask, why would they have hallucinated this? Messianic resurrection didn’t exist in Judaism or Paganism; so where did they get the idea in order to hallucinate it? (see “Expectation of Resurrection”)

Fifth, the hallucination theory wouldn’t prove that Jesus was alive, but that he was dead. Remember, no one was expecting a resurrected Messiah. So if someone had a vision, they would think this was a ghostly Jesus—not a glorified Jesus. If the disciples hallucinated a vision of the risen Jesus, they would’ve interpreted this as a phantom—not a physical resurrection. N.T. Wright explains,

Everyone in the ancient world took it for granted that people had strange experiences of encountering dead people. They knew at least as much as we do about visions, ghosts, dreams, and the fact that when somebody is grieving over a person who has just died, they sometimes see, briefly, a figure that seems to be like that person appearing to them. This is not a modern invention or discovery; ancient literature is full of it. They had language for that sort of phenomena, and that language was not ‘resurrection.’ They described these situations as a kind of angelic experience.[3]

For instance, in Acts 12, Peter physically appeared to Rhoda, but the disciples believed that this was “his angel” (Acts 12:15). Likewise, the disciples had the same belief when they saw Jesus walking on water, thinking he was a “ghost” (Mt. 14:26).

Sixth, the NT carefully contrasts resurrection appearances of Jesus from visions of Jesus. Paul had “visions” of Christ (2 Cor. 12:1-7; cf. Acts 18:9-10), as did Stephen (Acts 7:55-56). But these stand in contrast to Jesus physically appearing to Paul on the road to Damascus (Acts 9, 22, 26). In this case, Paul’s travelling partners could hear and see the blinding light, showing that these were external physical events—not internal mental events.