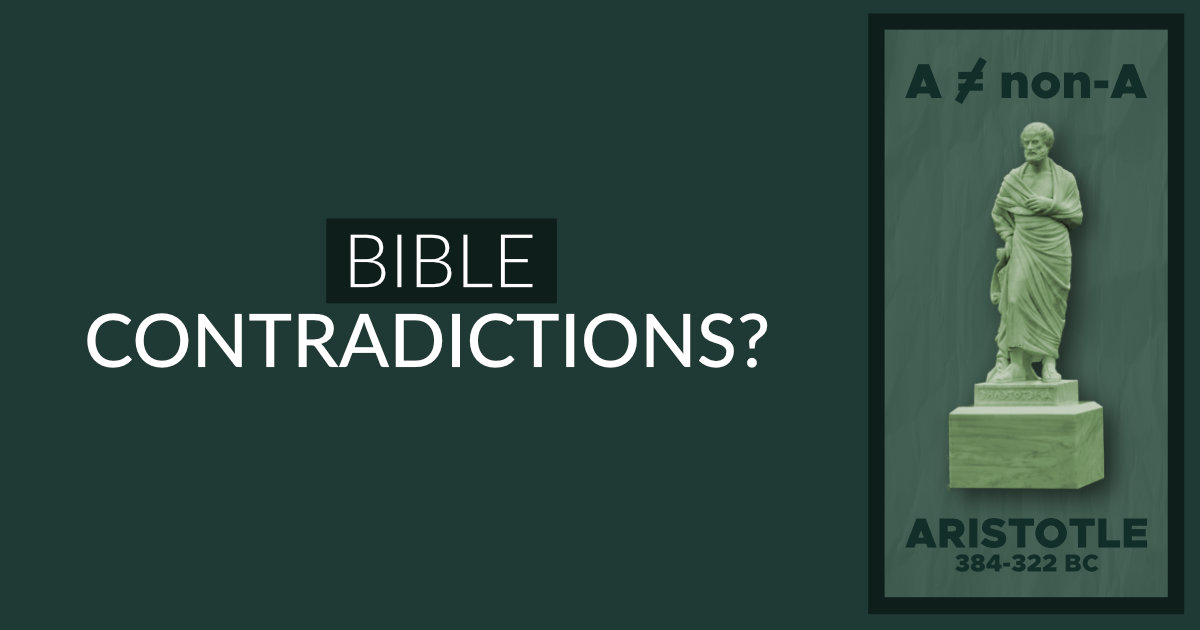 Contradictions do not eliminate the historical core

Even if the Gospels contradicted each other, this wouldn’t cause us to reject their history. For the sake of argument, let’s grant that the Gospels contain genuine, irrefutable contradictions. Does this mean that we should reject them as historical documents altogether? Not at all. Like all history, at most, it would get us to question peripheral details—not the historical core. Historians can still get at a historical core—even with contradictions. Consider a few examples:

Hopefully you can see the point. These discrepancies—and even contradictions—do not eliminate the historical core. In fact, even skeptic Bart Ehrman writes,

If two descriptions of an event (for example, Jesus’ death) are contradictory in their details, both accounts cannot be historically correct. One of them is historically wrong, or both of them are wrong, but both cannot be right, at least with regard to what actually happened. Does this mean that the Bible should be tossed aside, jettisoned as just another piece of old and basically worthless literature? Not in the least. I argue in my final chapter that we should continue to read, study, and cherish the Bible—but not as an inerrant historical account.[2]

Thus, even according to Ehrman, inerrancy is at stake—not the historical reliability of the NT documents. However, none of this is controversial: Anyone with two brain cells rubbing together knows that contradictions entail errors! But reliability doesn’t require perfection.

The Gospels agree on the historical core. Indeed, the Gospels are largely similar in their depiction of Jesus. Here are the details on which all four gospels agree:[3]

The Gospels all affirm these statements about the life of Jesus, and this serves as the core historical material about his life. If all we had was this, we wouldn’t be in too bad of shape!

Many skeptics do not use the word “contradiction” accurately

Repeatedly, critics like Ehrman write that “the Bible is filled with discrepancies, many of them irreconcilable contradictions.”[4] Indeed, the subtitle to his book refers to the “contradictions in the Bible.” However, in the words of Inigo Montoya, “You keep using that word. I do not think it means what you think it means.”

A contradiction carries a very specific definition. It doesn’t refer to a difficulty or a discrepancy—a puzzle or a paradox. A contradiction entails that two (or more) propositions are logically incompatible with each other. That is, there is no possible way for these two propositions to be true. Consider several definitions of the term “contradiction” in the ancient and modern literature:

David Kelley (Logician and philosopher from Princeton): “Two statements are contradictory if and only if they have opposite truth values for all combinations of their atomic truth values.”[6]

Irving Copi (Professor of logic and philosophy): “Contradiction: A statement that is necessarily false; a statement form that cannot have any true substitution instances.”[7]

Ehrman doesn’t understand this standard definition of what a contradiction even is. We would think that if one was to write a book on “contradictions in the Bible” that they would take the time to understand the meaning of the word! Yet Ehrman repeatedly confuses a true contradiction with what he personally finds hard to reconcile. Consider these quotes from his book Jesus, Interrupted (2009):

“[These are] very difficult indeed to reconcile” (p.9).

“I do not think this is a difference that can be reconciled” (p.27).

“The accounts themselves are not at all harmonious. Not only do they tell completely different stories about how Jesus was born, but some of the differences appear to be irreconcilable” (p.30).

“There are not only differences but also discrepancies that appear difficult if not impossible to reconcile” (p.33).

“There are historical implausibilities and discrepancies that can scarcely be reconciled” (p.34).

“These differences are discrepancies that cannot be readily (or ever) reconciled” (p.47).

“I’m not sure it’s possible to reconcile these accounts” (p.95).

“The discrepancies could not, in my judgment, be reconciled, however fanciful the explanation” (p.273).

Imagine if a person said that they couldn’t understand how quantum physics and Newtonian physics could both be true. Indeed, imagine if they said that these are “very difficult to reconcile,” “appear to be irreconcilable,” “appear difficult,” “cannot be readily reconciled,” “in my judgment” cannot be reconciled, and “I’m not sure it’s possible” to reconcile them. Would these assertions be convincing to anyone? Surely not. These are all personal statements of ignorance—not arguments. Truly these statements tell us more about the person’s personal psychology than they do about the problem itself. Put another way, just because Bart Ehrman can’t understand how to reconcile two different discrepancies, this doesn’t mean that these are genuine contradictions. Furthermore, we should not allow his personal incredulity to hold the rest of us hostage.

Harmonizations have been proven true with time

Lysanias: Before or after Christ? (Lk. 3:1) Luke refers to “Lysanias,” who was “the tetrarch of Abilene” (Lk. 3:1). Josephus[8] refers to a Lysanias who reigned as a tetrarch in Abilene as well, but there’s just one problem: He reigned three decades before Jesus was even born! (40 to 36 BC) How could someone harmonize such an obvious error?

As it turns out, two men by the name of Lysanias ruled as a tetrarch in Abila. Yamauchi writes, “Two Greek inscriptions from Abila, eighteen miles west, northwest of Damascus, have now proven that there was a ‘Lysanias the tetrarch’ between the years A.D. 14-29.”[9] If a Bible harmonizer posited two men named Lysanias who both ruled in the same location, they would be laughed at. However, this is what seems to explain the references from both Luke and Josephus.

As it turns out, there were two towns called Jericho—an old town and a new one. The OT describes the old Jericho (which Matthew and Mark depict), while Josephus records the new Herodian town,[10] which Luke describes. Matthew and Mark likely referred to the ancient Jewish Jericho, because they were Jewish men. Luke, however, likely referred to the town built by Herod the Great, because he was a Gentile.[11] Again, if a Bible harmonizer asserted two Jericho’s to explain this difficult, they wouldn’t be taken seriously. Yet, this is exactly what we see in this particular text.

The key word here is “appeared” to contradict each other.

As it turned out, Kantzer’s mother had been in two accidents. The first accident left her in critical condition, but when she was being rushed to the hospital in an ambulance, the driver crashed the ambulance and she died on impact. Once again, if a Bible commentator offered an explanation like this, he would be mocked. Yet, experience demonstrates that truth is often stranger than fiction.

Whatever happened to interpretive charity?

Richard Carrier is one of the most committed atheistic skeptics alive today. He denies that Jesus ever existed, and he makes a living off of speaking and writing in favor of atheism. Yet, he made an interesting comment in his book Sense and Goodness without God (2005). He wrote,

If what I say anywhere in this book appears to contradict, directly or indirectly, something else I say here, the principle of interpretive charity should be applied: assume you are misreading the meaning of what I said in each or either case.[13]

Consider his words for a moment. If modern atheist books can be misunderstood, then can’t the Bible? If we should give a modern author like Carrier “interpretive charity,” how much more should we give the benefit of the doubt to an ancient text like the Bible? Ironically (or should we say hypocritically?), Carrier extends no such generosity to the Bible.

OBJECTION: “If you try to reconcile two Gospels, you end up creating your own third Gospel.”

Critics argue that we should leave the discrepancies alone; otherwise, we end up creating an imagined account of Jesus’ life. Ehrman writes,

In order to resolve the tension between the Gospels the interpreter has to write his own Gospel, which is unlike any of the Gospels found in the New Testament. And isn’t it a bit absurd to say that, in effect, only ‘my’ Gospel—the one I create from parts of the four in the New Testament—is the right one, and that the others are only partially right?[14]

With all due respect, this is nonsense.

For one, we constantly harmonize data of all kinds—not just historical texts. For instance, when a scientist comes across a scientific abnormality, it encourages her to investigate more—not less. If she found a difficulty in the scientific data, she would never throw up her hands in defeat and say, “Well, I guess there’s no way to harmonize this contradiction. I guess it’s time to go back to school for business…” Instead, these scientific difficulties would lead her to further theories and discoveries. In the same way, difficulties in the Bible should lead us to more investigation, rather than less. Christian scholars are more intellectual in this sense, because their commitment to the truth of the text causes them to investigate further, rather than just throwing their hands up whenever they see the slightest hint of a discrepancy.

Second, refusing to harmonize accounts leads to absurdities. Matthew records Peter’s betrayal of Jesus, but he never mentions his subsequent repentance. If all we had was Matthew, we might wonder about whether Peter ever turned back to Christ. Consequently, commentator Robert Gundry has long defended the view that Peter was permanently apostate, and even went to hell![15] In his 1982 commentary on Matthew, Gundry stated that Jesus’ disciples should not “follow Peter’s dangerous example.” Gundry writes, “The link with [Matthew] 10:33, according to which Jesus will deny before his heavenly Father anyone who denies Jesus before men, shows that Peter is forfeiting his salvation.” Indeed, Peter participated in “apostasy in persecution and consequent loss of salvation.”[16] These are the absurd lengths that we need to go in order to be consistent with a refusal to harmonize our documents. This would never work in secular history, and we see no reason to adopt it for the Gospels.

Third, ironically, the accounts become two-dimensional if we refuse to harmonize them. For instance, all of the examples of “undesigned coincidences” give texture and depth to the people, places, and events in the Gospels (see “Interlocking in the Gospels”). But we only gain this level of nuance and depth by comparing documents and trying to flesh out the historical scenery. A person who merely throws his hands up in the air at every sign of discrepancy will result in knowing less about NT history—not more.

After personally studying over 1,000 Bible difficulties, we have seen that the criticisms of the critics lack merit, and the integrity of the Bible has been proven time and time again. Truly, no other book has garnered such widespread critical attacks, and still been regularly demonstrated as authentic. Therefore, we reject the view that the Bible contains errors or contradictions (see “The Inerrancy of Scripture”), and indeed, we should give the Bible the benefit of the doubt when we run into a difficulty that we can’t yet explain. After proving itself reliable time and time again, we would rather be agnostic if we cannot personally resolve a difficulty, rather than throwing the Bible in the dustbin.

See over 1,000 articles on Bible Difficulties.

Poythress, Vern S. Inerrancy and the Gospels: A God-centered Approach to the Challenges of Harmonization. Wheaton, IL: Crossway, 2012.

[2] Bart Ehrman, Jesus, Interrupted: Revealing the Hidden Contradictions in the Bible (and Why We Don’t Know about Them) (New York: HarperOne, 2009), p.59.

[4] Emphasis ours. Bart Ehrman, Jesus, Interrupted: Revealing the Hidden Contradictions in the Bible (and Why We Don’t Know about Them) (New York: HarperOne, 2009), p.5.

[12] I am indebted to one of Dr. Norman Geisler’s teaching tapes for this helpful illustration.

[13] Emphasis mine. Richard Carrier, Sense and Goodness Without God: A Defense of Metaphysical Naturalism (Bloomington, IN: Authorhouse, 2005), pp.5-6.

[14] Bart Ehrman, Jesus, Interrupted: Revealing the Hidden Contradictions in the Bible (and Why We Don’t Know about Them) (New York: HarperOne, 2009), pp.7-8.