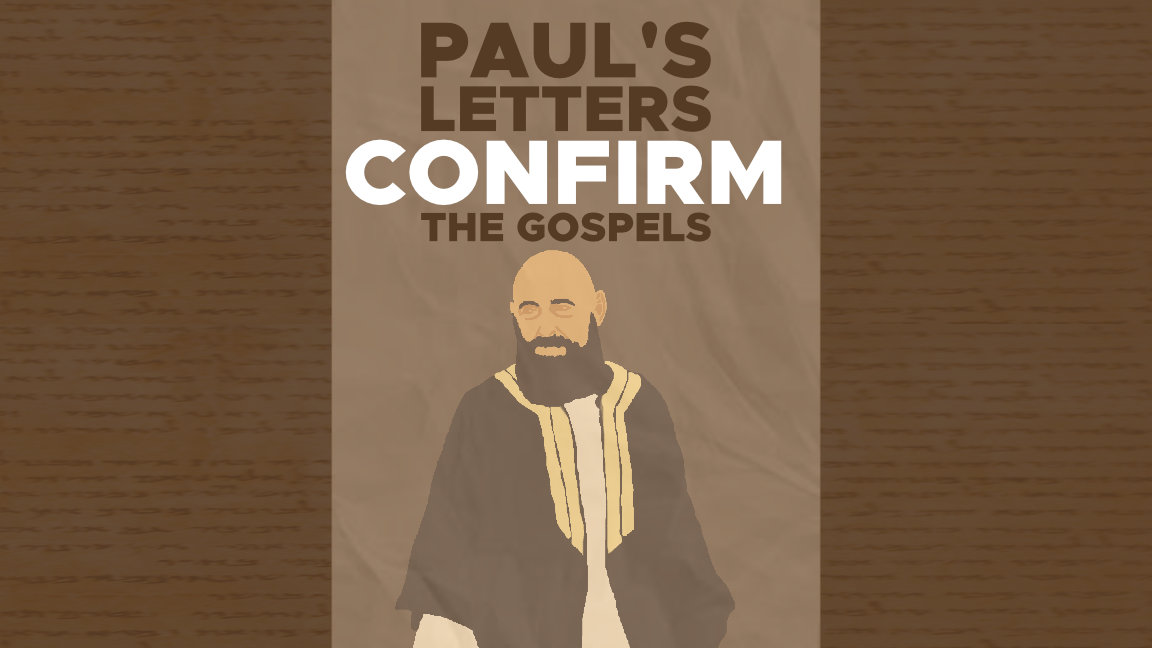 We shouldn’t expect a lot of historical data from Paul’s letters. After all, Paul wrote letters to churches—not a biography of Jesus. He wrote to various individuals and churches, and we wouldn’t expect these letters to contain a lot of history. As a point of comparison, consider the three letters of John. Even critics agree that whoever wrote the Gospel of John also wrote the three letters of 1, 2, and 3 John. And yet, even though the author was familiar with the historical Jesus, he mentions virtually no historical details regarding Jesus in his three letters. Therefore, we need to realize that the “genres of epistle and Gospel must thus be distinguished one from the other.”[1] With that being said, Paul’s letters contain a number of historical details that match what we see in the Gospels.

Critics only accept seven of Paul’s letters as authentically written by him: Romans, 1 & 2 Corinthians, Galatians, Philippians, 1 Thessalonians, and Philemon. We find their reasons for rejecting all thirteen to be weak (see “NT Introduction” for the authenticity of each Pauline letter). However, even if we limit ourselves to only seven letters, we still find a wealth of historical data regarding Jesus. This is sort of like climbing into the ring with one arm tied behind our back. But even so, the historical case for Paul is still strong.

What can we learn about Jesus from Paul?

Jesus’ birth. While Paul doesn’t explicitly teach a virginal birth, this passage is at least consistent with that teaching. Paul writes, “God sent forth His Son, born of a woman, born under the Law” (Gal. 4:4). Paul makes no mention of Jesus’ biological father anywhere in his letters, even though he lived in a patriarchal society.

Consequently, Paul’s letters reflect early teaching about Jesus that existed before the Gospels. A critic might state that Paul most likely learned about Jesus through oral tradition or even the Jerusalem apostles (Gal. 1:18-19; 2:6, 9). Indeed, we would agree. But that’s exactly the point: Paul’s view of the historical Jesus came from early Christian teaching that predated him. Therefore, his letters preserve what early Christians taught about Jesus, and this just so happens to match what we read in the Gospels.

Paul mentions these historical details in a “throwaway” fashion. Jesus assumes that the believers in Philippi believed in Jesus’ deity (Phil. 2:5-8), and he feels no compulsion to even argue for this teaching. Instead, he references Jesus’ deity in order to teach them about humility. In other words, Paul feels no inclination to persuade his audience of these historical details about Jesus. Instead, he assumes that they both affirm these facts, and he leverages these common beliefs to make other theological points.

Paul wouldn’t have likely invented some of these teachings. Paul states that Jesus will return “just like a thief in the night” (1 Thess. 5:2). Why would Paul compare the sinless Jesus (2 Cor. 5:21) to a sinful thief? This is highly unlikely, unless this analogy went back to the historical Jesus himself (Mt. 24:43). Furthermore, as a religious Pharisee (Phil. 3:3), Paul wouldn’t have been eager to teach others to pay taxes to Rome (Rom. 13:7). At the very least, he wouldn’t have been given this teaching from his Jewish background. Likewise, the notion that “nothing is unclean in itself” would not be a natural teaching for a Pharisee like Paul to adopt (Rom. 14:14). Worst of all, a Jewish Pharisee like Paul would not have invented a dying and rising Messiah, because this concept didn’t exist in second Temple Judaism.

In conclusion, this information from Paul serves as good corroborative evidence that supports the authenticity of the Gospels. As an early leader in the Christian movement, Paul’s throwaway comments about the historical Jesus confirm what we read in the Gospels which were written later.