This theological subject gives us two categories that capture “one’s perspective on the unity and purpose of Scripture.”[1] The Bible is a big book. What is our interpretation of the complete story of salvation history? Unless we have an accurate view of the whole of Scripture, we could easily misunderstand the parts. Likewise, our view of the parts will affect the whole.

Consider the ABC hit-show Lost. After the show concluded, there were multiple interpretations of its meaning, but two were prominent:

(1) This is an actual story of survivors on a mysterious Island: Under this view, the story was all about a group of people who survived a plane crash on a mysterious, science fiction island. The creation of the island and “the Others” all refer to real people, who were brought into a sci-fi survival story.

(2) This is a metaphor for life and death: The show Lost contains so many themes of life and death—spirituality and science—chaos and fate. Thus some argue that the entire show was about spirituality and life after death. Under this view, the characters on the Island were not really on an island at all. Instead, they actually died in the plane crash. Richard Alpert told Jack, “Do you want to know a secret Jack? …You’re dead… Literally, we’re all dead. Every single one of us. And this, all this, it’s not what you think it is… We were never on an island… We never were… We’re in hell!” This view argues that (1) the parallel universe symbolizes unrest with our sins, (2) the opening and closing of the show beginning and ending with Jack bleeding on the beach—zooming in on his eye, and (3) the final image of the plane crash site as the fact that the whole show occurred in purgatory.

The study of dispensationalism and covenantalism is important for revealing our own biases in interpretation, and also the biases of commentators and Bible teachers. Depending on our view of salvation history, we will come to radically different conclusions on individual passages within Scripture.

The central disagreement: Israel and the Church

These two theological camps debate over God’s promises to national Israel. God promised Abraham and David that he would keep Israel as a nation forever—independent of their faith or apostasy. Moreover, he promised David that one of his heirs would sit on the throne in Israel forever (see “Abrahamic and Davidic Covenants”).

Dispensational theologians take these promises to be literal. That is, God’s contract with Israel is still in effect—even though they crucified Christ.

Covenantal theologians hold that Israel forfeited their promises, because they rejected Christ. They are permanently out of God’s plan in salvation history—permanently replaced by the Church.

There are caveats that could be made in each of these distinctions. However, to put it simply, here are the basic differences between these two systems:

Dispensationalists recognize similarities between Israel and the Church, but deny that they are, therefore, the same.

Does God work differently with humanity in different phases of history?

Covenantalists argue that if God works differently with humans, then this would diminish God’s grace. For instance, Fuller writes, “It is impossible to think of varying degrees of grace, for God either is or is not gracious.”[2]

God’s purposes for humans have never changed, but his methods have. Consider a parent-child relationship. The parent always has the purpose of raising her child into an independent adult, but her methods may change. When a child is a toddler, the parent might instruct the child to grab their macaroni and cheese with their fingers and shovel it into their mouth. But when the child is a teenager, they might not tolerate such a thing at the dinner table. The parent’s purpose never changed (e.g. raising the child into an independent adult), but her methods did (e.g. using fingers versus using a fork).

Moreover, this seems to directly contradict James, who writes, “He gives a greater grace” (Jas. 4:6). Moreover, it is overwhelmingly clear that God does work differently at different times, and he is free to dispense grace as he sees fit:

God worked with Adam and Eve differently than us. He walked among them (Gen. 3:8). He spoke with them directly. He gave them one commandment—not many (Gen. 2:16-17).

Animal sacrifices, dietary laws, Sabbaths, holy days, festivals, priests and liturgy have all been fulfilled in Christ and are thus obsolete (Col. 2:16-17; Heb. 8).

Consider other areas that this discussion touches upon.

Dispensationalists see God moving much differently with believers in the new covenant, than in the old. Consider several passages in this regard:

“We have been released from the Law, having died to that by which we were bound, so that we serve in newness of the Spirit and not in oldness of the letter” (Rom. 7:6).

“Having overlooked the times of ignorance, God is now declaring to men that all people everywhere should repent” (Acts 17:30).

“The Law was given through Moses; grace and truth were realized through Jesus Christ” (Jn. 1:17).

“There is a setting aside of a former commandment because of its weakness and uselessness. 19 (for the Law made nothing perfect” (Heb. 7:18-19).

Dispensationalists note that believers are under the new covenant, and our relationship to the law has changed.

As we have argued elsewhere (see “What is the Church?”), the Church is distinct from Israel. Paul refers to the equal status of Jews and Gentiles as something that was a “mystery” in the OT (Eph. 3:4-6). This was only made possible after the death of Christ (Eph. 2:16). The Church didn’t begin until Pentecost (Acts 2). Thus dispensationalists only draw their information about how to define and govern the Church from Jesus’ explicit statements about the Church (Mt. 16:18; Mt. 18:15-18; 28:18-20), the book of Acts, and the epistles. Matthew 10 Ryrie writes,

Anyone who attempts to interpret plainly this commission, which forbade the disciples to go to the Gentiles, and the commission that commands the same group to go to the Gentiles (Matt. 28:19-20) either (1) gives up in confusion or (2) resorts to spiritualizing one of the passages or (3) recognizes a dispensational distinction.[5]

Because covenantalists see more of a unity in salvation history, they feel free to utilize OT material in current church structures. This leads to practices like infant baptism, religious calendars, tabernacles, priests, and worship services.

The ministry of the Holy Spirit changed after the Church was born in Pentecost (see “Who is the Holy Spirit?”). Even the OT predicted a time where believers would be indwelt by the Holy Spirit, which hadn’t happened yet (Ezek. 36:27; Joel 2:28). Jesus said, “That is the Spirit of truth… you know Him because He abides with you, and will be in you” (Jn. 14:17). Jesus said, “He who believes in Me, as the Scripture said, ‘From his innermost being shall flow rivers of living water’” (Jn. 7:38). And John comments, “This He spoke of the Spirit, those who believed in Him were to receive [future tense]; for the Spirit was not yet given, because Jesus was not yet glorified” (Jn. 7:39). Believers in the new covenant are sealed with the Spirit (Eph. 1:13-14), which was not true of OT believers. For instance, David prayed, “Do not take Your Holy Spirit from me” (Ps. 51:11; cf. 1 Sam. 16:14).

Many covenantalists do not see much of a difference in the Holy Spirit’s ministry before and after the Cross. They would maintain that surely something changed after Pentecost, but do not emphasize this as a major change. Dispensationalists hold that Spirit baptism happened only after Pentecost.

Covenantalists see no future role for national Israel, because Christ and the Church have replaced her. Dispensationalists believe that God will eventually work through Israel, once again. A dispensationalist will almost always be a premillennial, and a covenantalist will be an amillennial. Though theologian Michael Harbin writes,

As a case in point, Francis Schaeffer was largely Reformed and covenantal, but he was also premillennial. While the dispensational-covenantal views most commonly dictate our views in other areas, this isn’t always the case. For more on this topic, see “Millennial Views.”

Covenantalists use a more figurative or allegorical hermeneutic for prophecy (see “Faulty Hermeneutical Systems”). They base this on the notion that the NT authors spiritualize prophecies that refer to national Israel. Dispensationalists hold to a more literal hermeneutic on such passages.

Are the number of dispensations important? 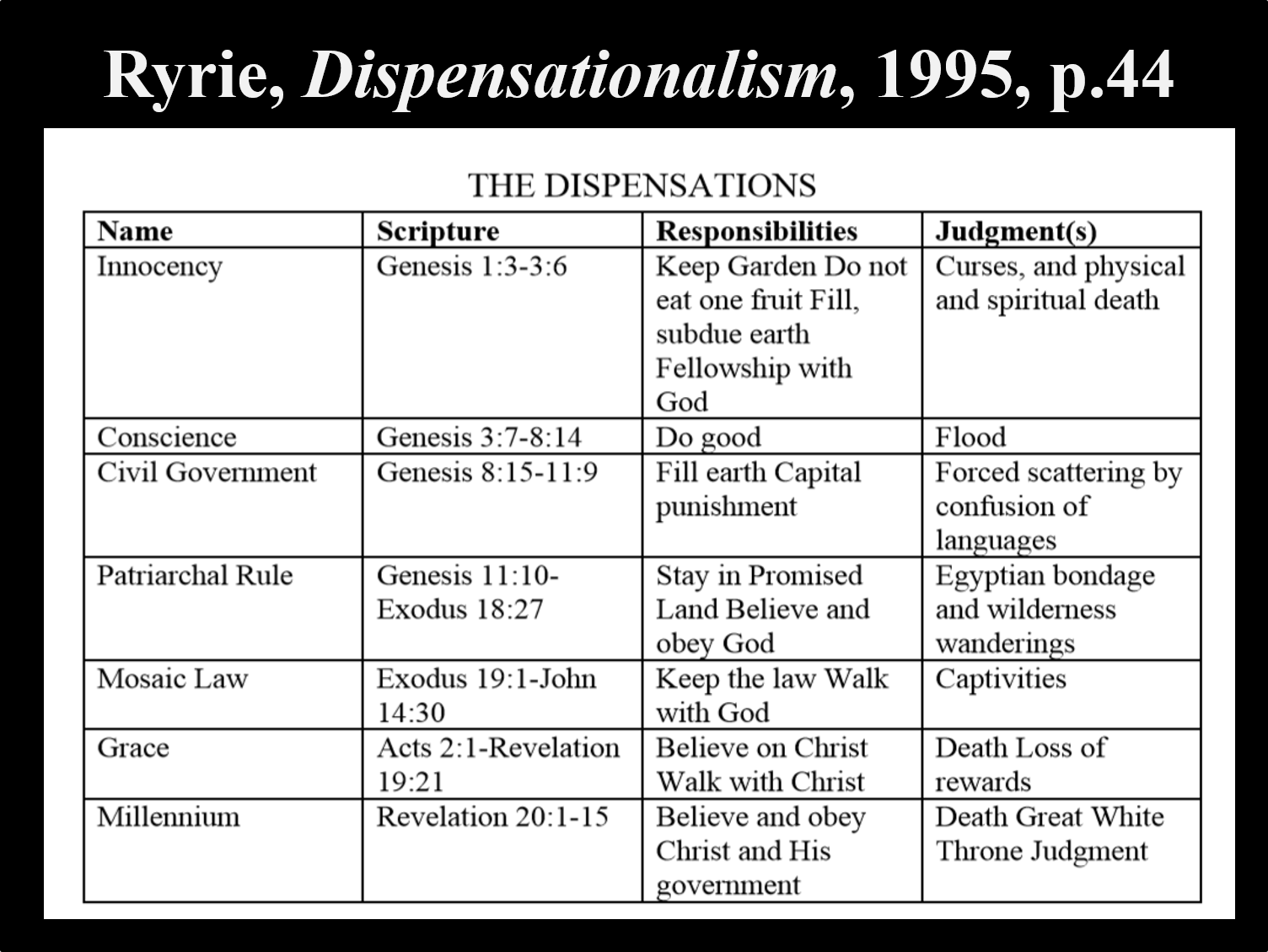 Yet when we consider the seven dispensations, we must ask ourselves: Are all of these really dispensations, or merely the next episode or stage in the story? Did God really change his approach or involvement with mankind?—or are these being forced onto the text? It’s especially suspicious that there are seven dispensations. These seem to be artificially imposed.

Does dispensationalism teach that there is more than one way of salvation?

Covenantalists charge that dispensationalists believe that grace only occurred after Christ, claiming that they teach two different forms of salvation. But this is surely not the case. Lewis Sperry Chafer writes,

Are there two ways by which one may be saved? In reply to this question it may be stated that salvation of whatever specific character is always the work of God in behalf of man and never a work of man in behalf of God. This is to assert that God never saved any one person or group of persons on any other ground than that righteous freedom to do so which the Cross of Christ secured. There is, therefore, but one way to be saved and that is by the power of God made possible through the sacrifice of Christ.[9]

Is dispensationalism a new concept?

While dispensationalism was not fully articulated in the church fathers, it was certainly recognized there to a large degree:

Justin Martyr (AD 150): “If one should wish to ask you why, since Enoch, Noah with his sons, and all others in similar circumstances, who neither were circumcised nor kept the Sabbath, pleased God, God demanded by other leaders and by the giving of the law after the lapse of so many generations, that those who lived between the times of Abraham and of Moses be justified by circumcision and the other ordinances-to wit, the Sabbath, and sacrifices, and libations, and offerings.” (Dialogue with Trypho, XCII)

Irenaeus (AD 200): “For this reason were four principal covenants given to the human race: one, prior to the deluge, under Adam; the second, that after the deluge, under Noah; the third, the giving of the law, under Moses; the fourth, that which renovates man, and sums up all things in itself by means of the Gospel, raising and bearing men upon its wings into the heavenly kingdom” (Against Heresies, III, XI.8)

Augustine (AD 350): “If it is now established that that which was for one age rightly ordained may be in another age rightly changed—the alteration indicating a change in the work, not in the plan, of Him who makes the change, the plan being framed by His reasoning faculty, to which, unconditioned by succession in time, those things are simultaneously present which cannot be actually done at the same time because the ages succeed each other.” (To Marcellinus, CXXXVIII, 5, 7)

Ryrie explains, “After important doctrinal issues of the Reformation were settled, theologians were able to turn their attention again to these matters involving God’s dealing with humanity.”[12]

Witmer (see below) offers a scathing critique of this book. He notes a multitude of factual historical errors. The book lacks a Scripture index, and it is clearly polemical. Instead of engaging with dispensational scholarship, Witmer shows that Gerstner really offers a straw man of dispensationalism, and he fails to offer an exegetical interaction with the debated texts.

Witmer, John. “A Review of Wrongly Dividing the Word of Truth.” Bibliotheca Sacra (April-June 1992). Part One.