The bibliographical test (also called lower criticism or textual criticism) asks if the original OT manuscripts were accurately transmitted to us today. Were these documents passed on reliably, or were they distorted over time?

The term “manuscript families” refers to different, independent groups of manuscripts that preserve the OT text. As students of the Bible, we should familiarize ourselves with these, so that we are able to recognize older and more reliable families:

Cairo Genizeh. This was a repository for retired manuscripts. It dates from the 5th to 19th century AD. 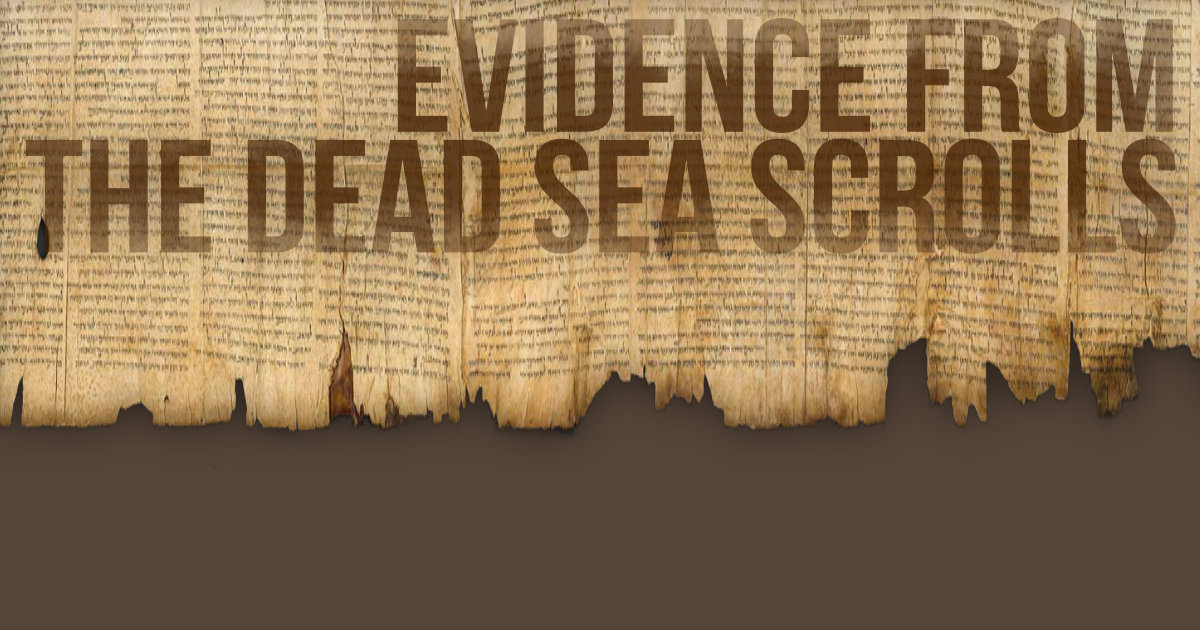 Dead Sea Scrolls (DSS). In 1947, a young Bedouin shepherd boy was throwing rocks near the Dead Sea, trying to rouse his flock of goats. He threw a rock into one of the caves, and he heard a tumultuous crashing of clay pots. After he investigated, he found that a number of clay pots filled with scrolls and manuscripts. This eventually turned out to be the greatest manuscript discovery to date.

The Qumran community was a group of Jewish Essenes, who fled to the Dead Sea to separate themselves from the rest of the Jews. The environment is dry and arid around the Dead Sea. When the Romans came to destroy the city of Jerusalem and the Temple, the Essenes could see them coming! They packed all of the Scriptures into these clay pots inside the caves. The caves around the Dead Sea provided perfect conditions for preserving these scrolls for millennia—being dry, arid, and dark.

The entire book of Isaiah was found. The scroll was 24 feet long and ten inches wide. Before this discovery, the earliest Masoretic manuscript of Isaiah was the Cairo Codex (A.D. 895).[2] Therefore, there was a 1,000 year gap between the earliest known OT manuscript and the DSS. And yet, the two documents—separated by over a millennium—were almost identical. Walter Kaiser writes,

These caves have yielded some eight hundred scrolls, with parts or, in some cases, the entirety of the text of all thirty-nine books of the Old Testament except the book of Esther.[3]

The dates generally given for the DSS, on the basis of paleography, numismatics, and what slight archaeological context surrounds them in the caves where they were found, is from the mid-third century BC to AD 135.[4]

Our tradition has it that seventy-two elders working independently of each other in Alexandria produced seventy-two translations of the Torah in seventy-two days during the reign of Ptolemy II (285-247 BC)—hence this translation is often called the Septuagint, meaning ‘the seventy’—most regard the tradition to be implausible. However, it is believed that around 250 BC the Torah was translated into Greek, probably in Alexandria, followed by the remainder of the TANAK in the next century or so.[5]

The LXX predates the New Testament, dating anywhere between 250 B.C. and 132 B.C. at the latest. Harris notes that the 250 B.C. date is inferred from tradition—a translation done under Ptolemy Philadelphus. The 132 B.C. date comes from the prologue of Ecclesiasticus in the Apocrypha, which refers to the OT being dressed in Greek.[6]

Why trust the OT text?

The OT was not preserved like the NT in its quantity of texts (see “Historicity of the NT”), but it was marvelously preserved in its quality. While we don’t have as many manuscripts, the manuscripts we do have were faithfully passed down.

First, the TEXTUAL EVIDENCE supports its reliability. The DSS predate the MT by over a millennium, yet these two families are remarkably close to one another. For example, the copy of Isaiah in the DSS was virtually identical to the copy from a thousand years later. Gleason Archer writes,

Even though the two copies of Isaiah discovered in Qumran Cave 1 near the Dead Sea in 1947 were a thousand years earlier than the oldest dated manuscript previously known (A.D. 980), they proved to be word for word identical with our standard Hebrew Bible in more than 95 percent of the text. The 5 percent of variation consisted chiefly of obvious slips of the pen and variations in spelling.[8]

The state of purity in some of the DSS is nothing short of spectacular. For instance, in one complete Isaiah scroll, only three words exhibiting a different spelling were found for a book that runs about one hundred pages and sixty-six chapters in our English text.[9]

Second, the HISTORICAL AND CULTURAL EVIDENCE supports its reliability. Historically, Jewish copyists were downright paranoid about making mistakes! Kaiser writes, “In order to prevent any copying mistakes, each biblical book had as a colophon (end piece) the total number of consonants, the middle letter of the book by location and other mathematical devices that were used by the copiers to check and recheck their work.”[10] Frederick Kenyon writes,

[The Masoretes] numbered the verses, words, and letters of every book. They calculated the middle word and the middle verse of each… These trivialities… had the effect of securing minute attention to the precise transmission of the text; and they are but an excessive manifestation of the respect for the sacred Scriptures which in itself deserves nothing but praise. The Masoretes were indeed anxious that not one jot or tittle—not one smallest letter nor one tiny part of that letter—of the Law should pass away or be lost.[11]

The rolls in which these regulations are not observed are condemned to be buried in the ground or burned; or they are banished to the schools, to be used as reading books.[12]

A damaged or imperfect copy was at once condemned as unfit for use.[13]

Third, the THEOLOGICAL EVIDENCE supports its reliability. Because the Jews were “superstitious” about their transmission of the Bible, they had motive to be meticulous. They would do anything for the Scripture, because they believed that this was a divinely appointed ministry from God. A modern atheist might make careless mistakes in copying a letter, but not a Jewish scribe! Rabbi Ishmael writes, “My son, be careful, because your work is the work of heaven; should you omit [even] one letter, the whole world would be destroyed.”[14] Josephus writes, “What Greek would endure as much for the same cause? Even to save the entire collection of his nation’s writings from destruction he would not face the smallest personal injury. For to the Greeks they are mere stories impro­vised according to the fancy of their authors; and in this estimate even of the older histori­ans they are quite justified, when they see some of their own contemporaries venturing to describe events in which they bore no part, without taking the trouble to seek informa­tion from those who know the facts.”[15]

Can we have great confidence in our OT text? Do we read what the OT authors wrote to us millennia ago? The evidence supports such reliability. The transmission of the OT is trustworthy due to (1) its various manuscript families, (2) the quality of the texts we observe passing from the DSS in the 2nd century BC to the MT in the 10th century AD, (3) the historical culture of Jewish scribes, as well as (4) the theological motive for providing us with a faithful transmission. While the OT wasn’t preserved in a quantity of manuscripts as we find in the NT, it was preserved in the quality of its manuscripts.

[1] R. Laird Harris writes, “The Hebrew alphabet did not have vowels. At a later stage—probably after it had ceased to be a living language—certain of the weaker consonants were employed as vowel letters to mark long or especially significant vowels. Finally, during the early Middle Ages, an intricate system of vowel points, which involved marking all the vowels very carefully, was invented.” Harris, R. Laird. Inspiration and Canonicity of the Scriptures. Greenville, SC, 1995. 75.