In his short story “The Wall,” atheistic author Jean-Paul Sartre explains the plight of a Spanish Civil War prisoner. Guards question this man and his two friends before telling them that they will be executed in the morning: death by firing squad against “the wall.”

Amidst this agony, the narrator realizes the insignificance of his life, as he is surely dying in only a few hours. In the midst of the inner monologue of the character, Sartre’s narrator says, “In the state I was in, if someone had come and told me I could go home quietly, that they would leave me my life whole, it would have left me cold: several hours or several years of waiting is all the same when you have lost the illusion of being eternal.”

Sartre cuts to the core of the human condition. Without eternal life, our lives truly lack any ultimate significance. Christian philosopher William Lane Craig writes, “Whether it comes sooner or later, the prospect of death and the threat of nonbeing is a terrible horror.”[1] As atheistic thinker Albert Camus writes, “There is but one truly serious philosophical problem, and that is suicide.”[2] Camus’ statement is haunting to the atheistic thinker: if life is destined to end, why not end it sooner, as opposed to later?

If God doesn’t exist, then neither does eternity. Thus human significance shrinks to the temporal and transitory. While we might feel like our lives are significant, ultimately, they aren’t. To help understand this concept, consider this math problem:

This is a frustrating problem to work through, especially once you reach the end. After all of that work of adding and subtracting, you come to find that it was all multiplied by zero. What a waste of time! We could add a hundred more numbers, and it wouldn’t make any difference in the end whatsoever.

And yet when you think about it, this is also true of humanity—either individually as persons or collectively as a species. Physicists tell us that the universe is going to end in heat death; all of the useable energy in our universe will eventually burn out. No matter how we live our lives, we are doomed to private death as individuals and collective extinction as a species. This isn’t a probability; it’s a certainty. No matter what we do with our lives, we will face the unavoidable conclusion of death. Given this fact, from the atheistic perspective, there is no ultimate significance to life. As atheist Jean-Paul Sartre writes, “Thus it amounts to the same thing whether one gets drunk alone or is a leader of nations.”[3]

Now someone might say, “Now, wait a minute! My life has significance, because I affected a lot of people and made a difference in their lives.” While this may be true, it only shows a relative impact on others—not an ultimate one. Eventually, the tides of time will wipe our impact clean off the face of the Earth.

In the classic rock song “That’s the Way,” Led Zeppelin’s lead singer Robert Plant sings, “And yesterday I saw you kissing tiny flowers, but all that lives is born to die. And so I say to you that nothing really matters, and all you do is stand and cry…”[4] If “all that lives is born to die,” then Plant is right: nothing really matters. If we really comprehend the gravity of a universe without God, then we really can’t blame the girl for standing and crying in a universe doomed to death.

This concept became real to me several years ago, when I sat with my elderly grandfather in his basement. He showed me old black and white pictures of our family from the 1930s. My grandfather was just a little boy in the photos (which would give you an idea of how old they were). He asked if I recognized any of the people in the photographs. I told him I didn’t.

“What about him?” he asked, pointing his aged finger at one of the pictures.

I shrugged my shoulders.

“What about her?” he asked.

Again, I shook my head.

Finally, he said, “What about this guy?”

I had no idea who the man was.

“That’s your great-grandfather!” he exclaimed.

None of the pictures were very interesting to me. These were all dead people whom I’d never met. They were important to my grandfather, but not to me. As I sat staring at the photographs, a sudden realization flooded into my mind: Not only was I unable to recognize my great-grandfather in a line-up; I didn’t even know the man’s first name.

But consider how significant this man’s life was to my own existence. If he hadn’t lived, then I wouldn’t be alive. Yet his significance is already beginning to fade—even to me, someone who should be largely aware of his importance. Likewise, in the not so distant future, no one will be able to recognize you (or me) in a photograph. Our lives’ work will be erased from the face of the Earth in 50 or 100 years—or perhaps 200 if we are lucky.

If the Christian God is real, then we have the hope of eternity. Death is not the end, only the beginning. But if God is dead, then any ultimate significance dies with him.

What is the result? 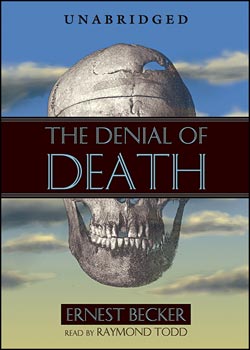 The author of Hebrews writes, “Only in this way could [Christ] set free all who have lived their lives as slaves to the fear of dying” (Heb. 2:15 NLT). Here the Bible teaches that humans have an inherent fear of death, because we all have the thirst for meaning and purpose, as God has put “eternity in [our] hearts” (Eccl. 3:11). But our hopes are drowned in the gutter of a fleeting existence. Thus in his Pulitzer Prize winning book The Denial of Death, Ernest Becker writes,

The idea of death, the fear of it, haunts the human animal like nothing else; it is the mainspring of human activity—activity designed largely to avoid the fatality of death, to overcome it by denying in some way that it is the final destiny of man.[5]

How do humans cope with this? Becker writes that humans try to

…transcend death by participating in something of lasting worth. We achieve [artificial] immortality by sacrificing ourselves to conquer an empire, to build a temple, to write a book, to establish a family, to accumulate a fortune, to further progress and prosperity, to create an information society and a global free market.[6]

In other words, as humans, we try to distract ourselves from our ultimate doom by trying to invest in making a temporary impact on the world around us. But consider Percy Shelley’s famous poem “Ozymandias,” which speaks to this very solution. Shelley writes,

I met a traveller from an antique land

Who said: Two vast and trunkless legs of stone

Stand in the desert. Near them, on the sand,

Half sunk, a shattered visage lies, whose frown,

And wrinkled lip, and sneer of cold command,

Tell that its sculptor well those passions read

Which yet survive, stamped on these lifeless things,

The hand that mocked them and the heart that fed:

And on the pedestal these words appear:

“My name is Ozymandias, king of kings:

Look on my works, ye Mighty, and despair!”

Nothing beside remains. Round the decay

Of that colossal wreck, boundless and bare

The lone and level sands stretch far away.

It seems that Ozymandias was a great conqueror and king in his day, striking fear into the hearts of those around him. But Shelley’s poem offers a great and terrible irony when one simply asks, Who the hell is King Ozymandias?! The message of Shelley’s poem is obvious: even the great heroes of history will eventually fade in the sands of time. A powerful king of yesterday is merely a crumbling statue today.

What about mind-melding with machines? What of the Singularity Movement?

Ray Kurzweil—a secular thinker who leads the Singularity Movement—hopes to scan his consciousness into a high-tech computer hard-drive, thus living forever. He hopes that as human technology evolves, we will be able to live as indestructible machines—almost like Steven Spielberg’s science fiction vision in A.I.[7]

There are many problems with this solution to our thirst for eternal life. For one, even if our minds could be preserved or replicated in a machine (which is science fiction at best!), this wouldn’t mean that we would continue to exist—only our duplicates. If naturalism is true, then the “mind” or “soul” would not transfer to the machine—only the same neuro-chemical firings of our brain would transfer. Therefore, our mechanical duplicate would survive, but not us. In addition, as we have already seen, these machines wouldn’t survive the ultimate heat death of the universe, so the “scanned-consciousness” scenario would merely extend our dilemma, not solve it.

Moreover, living eternally without the infinite joy and love of God wouldn’t be a blessing but a curse. Consider the vampires in Anne Rice’s popular book Interview with a Vampire. After mere centuries of living, her immortal creatures yearned for death, because the pleasures of life had become boring and banal. Philosopher William Lane Craig comments,

Mere duration of existence does not make that existence meaningful. If man and the universe could exist forever, but if there were no God, their existence would still have no ultimate significance. I once read a science-fiction story in which an astronaut was marooned on a barren chunk of rock lost in outer space. He had with him two vials: one containing poison and the other a potion that would make him live forever. Realizing his predicament, he gulped down the poison. But then to his horror, he discovered he had swallowed the wrong vial—he had drunk the potion for immortality. And that meant that he was cursed to exist forever—a meaningless, unending life. Now if God does not exist, our lives are just like that. They could go on and on and still be utterly without meaning. We could still ask of life, “So what?” So it’s not just immortality man needs if life is to be ultimately significant; he needs God and immortality. And if God does not exist, then he has neither.[8]

Without the infinite love and joy of God, continued existence in a fallen world would be more like torture than paradise. Atheist Jean-Paul Sartre writes, “There comes a time when one asks, even of Shakespeare, even of Beethoven, ‘Is that all there is?’”[9]

What about living for fame or success?

Living our lives for fame might bring pleasure and temporary satisfaction. However, this is a cheap and paltry substitute for eternal life. For instance, consider the world of basketball. Most people today would be able to identify LeBron James or Kobe Bryant. But what if we showed pictures of Michael Jordan from ten years ago? Surely most people would recognize Jordan.

But what if we showed pictures of Magic Johnson or Julius Erving?

What about Walt Frazier—one of the best players in N.B.A. history?

What about Neil Johnston?

Clearly Johnston was famous in his day. But what about today? How many have even heard of Neil Johnston? Clearly, fame fades…

If life after death is real, it would change our lives drastically. For instance, imagine an eight year-old girl in a hospital bed, dying of cancer. As the family gathers to mourn over her, their doctor walks into the room and tells them that he has an experimental medicine that could cure the little girl, allowing her to live for another 70 or 80 years. Maybe the medicine is legitimate, and maybe it’s not. Maybe the doctor is genuine, and maybe he is a quack. But let’s not pretend that this claim of a cure is meaningless either way. Likewise, maybe life after death is true and maybe it’s false. Maybe we have no idea either way. But let’s not pretend that the subject is pointless to discuss. If we live forever after death, we should be eager to find out.