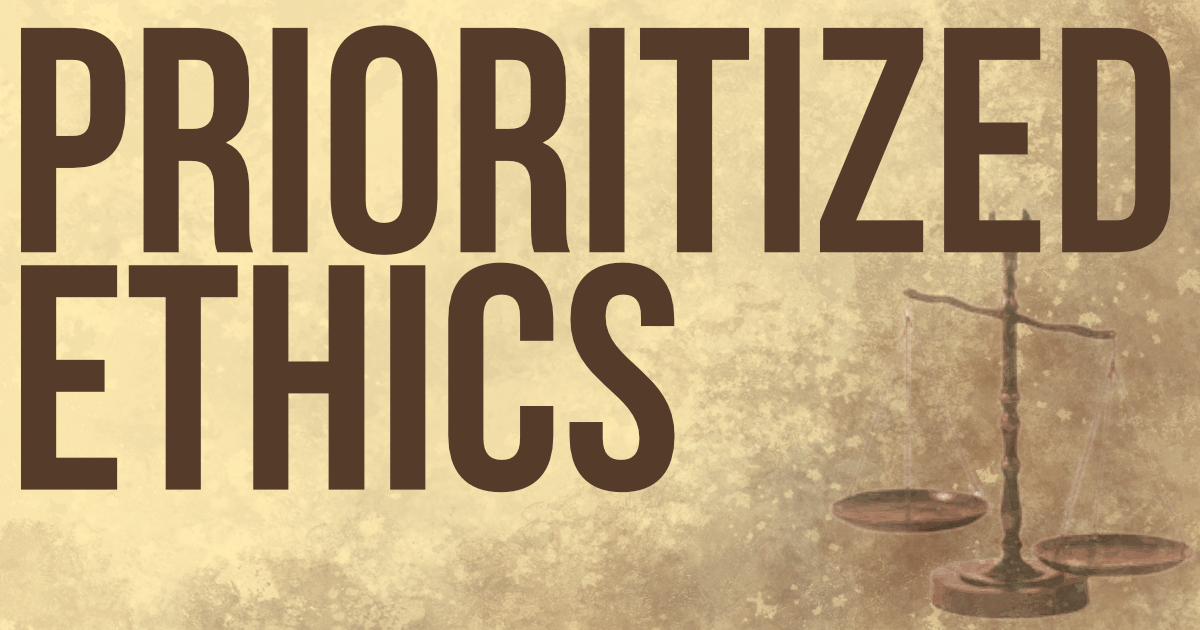 Prioritized ethics are just as important as arriving at our ethical principles in the first place. Without a proper emphasis in our ethics, our moral system will be terribly skewed.

Prioritized ethics (also called “graded absolutism”) argues that some moral actions are more important than others. In our estimation, the biblical case for this is overwhelming:

James referred to a “stricter judgment” for teachers (Jas. 3:1).

Clearly, some moral actions are more important than others. Ethics are prioritized in this sense.

A case study: Rahab lying to the Canaanites

The Bible condemns lying (Lev. 19:11; Prov. 12:22; Eph. 4:25). However, God blesses Rahab for lying to the Canaanites that were trying to capture the Hebrew spies. Those who reject prioritized ethics consider Rahab to have been in sin for doing so. For instance, theologian Wayne Grudem writes,

Nowhere in Scripture is there any verse like this, an explicit approval of a lie, even one told to protect innocent life. There are dozens of statements in Scripture about lies, and they always condemn them.[1]

John Calvin writes of this passage,

As to the falsehood, we must admit that though it was done for a good purpose, it was not free from fault. For those who hold what is called a dutiful lie to be altogether excusable, do not sufficiently consider how precious truth is in the sight of God. Therefore, although our purpose be to assist our brethren… it can never be lawful to lie, because that cannot be right which is contrary to the nature of God. And God is truth.[2]

Augustine writes of this passage,

However, this moral dilemma was unavoidable. God doesn’t hold us responsible, if we cannot choose otherwise. In cases like these, it is better to pursue the higher good. The reason lying is wrong is because it seeks to hide evil. If lying didn’t hide or promote evil, it wouldn’t be wrong. However, Rahab was not trying to hide evil; she was trying to promote good (i.e. protecting the spies). Therefore, God blessed her for showing incredible bravery and faith. It would’ve been cowardly to tell the Nazis that Jewish people were hiding in our attic—not honest.

We are disappointed with the perspective of these interpreters above. It seems that the focus is more on the personal righteousness of ourselves, rather than doing what’s helpful for others. This is the height of pious religiosity: Being more concerned about telling a lie, rather than the lives of two other men. Of course, we admire the scholarship of Grudem, Augustine, and Calvin. So, we hope that this critique would not be taken as disrespect, but rather disagreement.

Saint Simeon Stylite (AD 390 to 459) was a Christian ascetic who achieved fame for living 37 years on a small platform on top of a pillar near Aleppo in Syria. Other “stylites”[4] followed in his example, because they thought that it was “saintly” to remove oneself from worldliness and sin. Of course, while “Saint Simeon” kept himself from omissive sin, he also kept himself from fulfilling the Great Commission and loving others (Mt. 28:18-20). We see these same problems today in much of fundamentalism: an obsession with moral minutiae but a carelessness to the “weightier portions of the law” like love for God and others.

Does this imply moral relativism?

Prioritized ethics do not condone moral relativism (see “Is It Objectively Wrong to Object to Moral Wrongs?”). Instead, in moral dilemma, there is an objectively right decision to make. Geisler explains, “If all moral laws are rooted in God, then how can lying ever be right, since God is absolute truth? Very simply, the answer to this is that lying as such does not flow from God’s nature. A lie can never be justified by an appeal to him who is truth. However, while lying as such is never justified, lying to save a life is. By ‘lying to save a life’ is really an act of mercy, and mercy is an attribute of God. Cutting off a human leg as such is not right either. It is called mutilation. But cutting off a leg to save a life is right. It is called amputation.”[5]

Wisdom teaches that we should overlook some moral issues in favor of others—or at the very least, we should be patient and forbearing with smaller moral issues. If we emphasize everything in a person’s life, then we have effectively emphasized nothing. This might be similar to using a highlighter on a textbook, but highlighting every single line in the book! If we highlight every line, then we haven’t taken note of the important parts at all. Instead, we have simply changed the color of the text. Similarly, believers should learn to focus or emphasize the moral issues that are more important.

When applying prioritized ethics, this does not mean that smaller sins cease to be sinful. Instead, this approach consciously chooses to focus on the bigger issues in a person’s life, rather than the smaller ones. Many Christians believe that they are in the center of God’s moral will, because they abstain from cursing or smoking, and they would be plagued with guilt for smoking a cigarette or cursing when they stub their toe. Yet these same Christians don’t ever think about their lack of love for lost people or a general lack of love in their lives (issues that Scripture values as highly important). Does this not show that many Christians have failed to grasp the importance of a prioritization in their ethical thinking? As believers, we should learn not only to teach what the Bible teaches, but to emphasize what the Bible emphasizes. Moreover, we should learn that those who “strain the gnat” are usually the same as those who are “swallowing the camel.” Repeatedly, we see that those who focus on the moral minutiae are the same who are failing to love God and others radically.

This approach takes wisdom and discernment in applying our ethical thinking to the complex moral realities of life. In most situations, we aren’t given such clear cut solutions. In fact, we may be choosing to emphasize one sinful issue over another sinful issue, simply because one is more important than another. We should carefully weigh the alternatives in every complex moral situation, as well as respect the conscience of those who disagree with us (1 Cor. 8; Rom. 14).

[4] The Greek word style means pillar. Hence, a “stylite” is one who lives on a pillar.