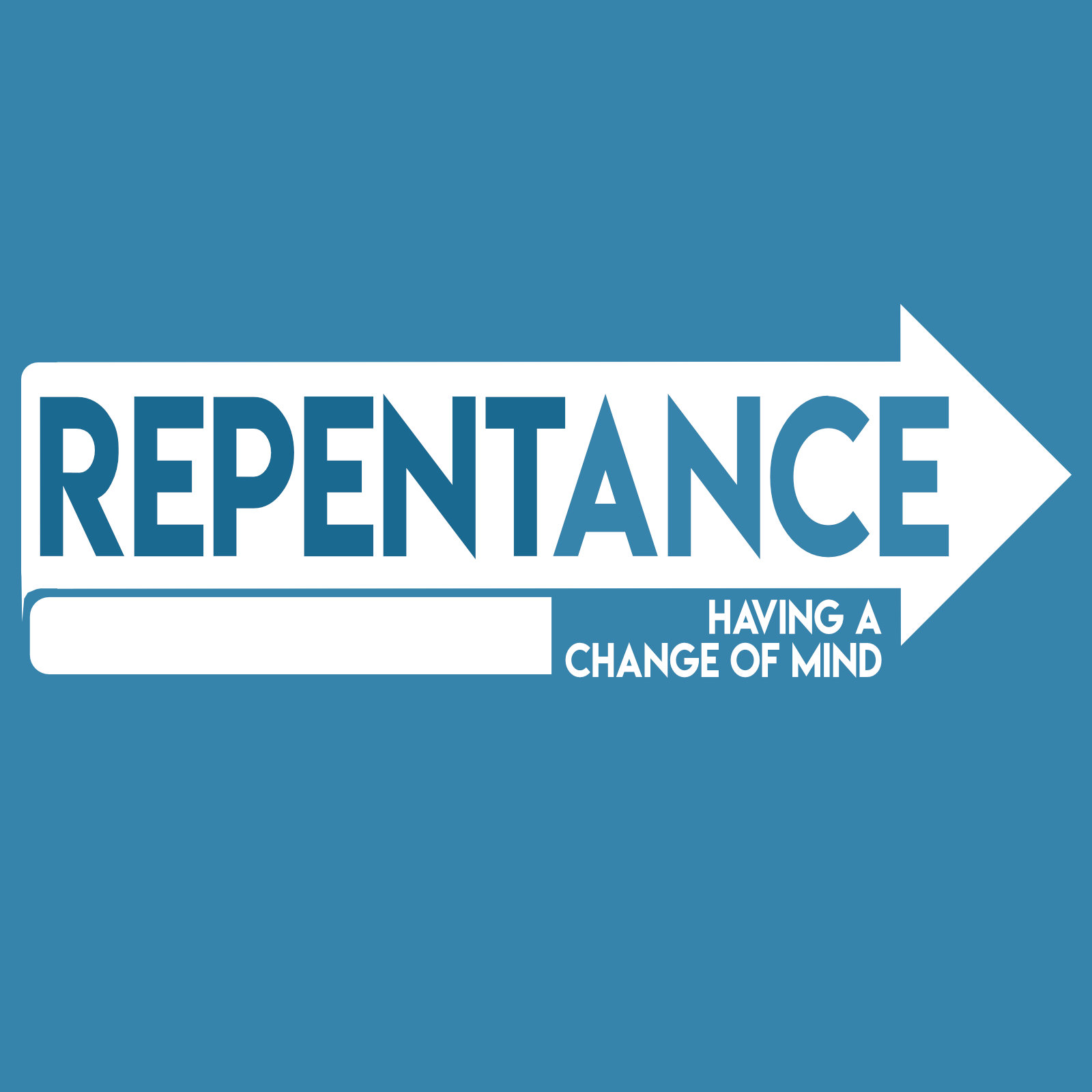 We really dislike how fanatical Christians and legalistic preachers have horribly tainted the biblical term “repentance.” Our culture usually associates the words “repent” or “repentance” with men screaming about the rapture on street corners, waving King James Bibles in one hand and passing out apocalyptic leaflets in the other. This is a great tragedy, because the biblical notion of repentance is such a beautiful and life-changing concept.

Repentance comes from the Greek word metanoia. The preposition meta means “after,” and nous refers to our “mind.” Thus, we can translate this term as a “change of mind.”[1]

How does repentance relate to non-Christians?

When the NT uses the term “repent” or “repentance” for non-Christians, the context usually refers to having a change of mind toward God.

Paul spoke about a “repentance toward God and faith in our Lord Jesus Christ” (Acts 20:21). Later, Paul said, “[The Gentiles] should repent and turn to God, performing deeds appropriate to repentance” (Acts 26:20). Paul believed that it was “the kindness of God leads you to repentance” (Rom. 2:4). By contrast, those with an “unrepentant heart” (ametanoētos) will face God’s judgment (Rom. 2:5).

The author of Hebrews writes about a “repentance from dead works and of faith toward God” (Heb. 6:1). Here, the message is to change our mind about a legalistic, works-based righteousness, and falling on the free grace of God.

Jesus spoke in similar terms. He said, “Repent and believe in the gospel” (Mk. 1:15). That is, people should have a change of mind about God, turning to trust in him. Jesus taught that it fills God’s heart with joy when “one sinner repents” (Lk. 15:7). In fact, it was Jesus’ central mission to call “sinners to repentance” (Lk. 5:32).

God can “grant repentance” (Acts 5:31; 11:18; 2 Tim. 2:25), which likely refers to permitting people to come to Christ. Peter writes that God does not want “any to perish but for all to come to repentance” (2 Pet. 3:9). Therefore, God can open the door and give us an opportunity to repent, but we have to choose to have a change of mind.

How does repentance relate to spiritual growth?

When believers are stuck in a persistent sin habit or a massive moral failure, they often ask, “What does it look like to repent of this?” Or they might say, “I want to change, but I don’t know how to repent.” Of course, it’s possible that a believer could be saying that they don’t know how to repent, when they really don’t desire to repent. But at the same time, many believers have never understood this important aspect of spiritual growth. What is at the heart of biblical repentance? And what does it look like to truly have a change of mind before God?

When we fall into sin, it’s easy to focus on the wreckage that sin has caused in our lives or in the lives of others. Like all other aspects of the Christian life, we cannot begin by focusing on ourselves or on other people. Instead, we need to consciously pull our focus onto God. Even after being caught in the sins of adultery and murder, David prayed, “Against you, and you alone, have I sinned; I have done what is evil in your sight” (Ps. 51:4 NLT). While this is surely hyperbole, this claim is completely at odds with our common experience. That is, we have a natural inclination to focus on ourselves or others when we fall into sin, and only consider God afterwards. But without a deliberate turning to God, we will never find true repentance.

Even during a time of horrible moral failure, David testified that his repentance would be followed by “joy” (Ps. 51:8, 12, 14). Is this some sort of spiritual platitude that doesn’t actually correspond with reality? After all, how could David really claim to feel “joy,” even in the midst of such a horrific moral disaster? We can think of a few reasons:

(1) We experience joy because we lose the persistent, low-level guilt that comes from hiding and lying about our sin. When we construct a web of lies, we constantly think about keeping our story straight. We need a constant recall on keeping our story straight with each individual person we know. Such an experience is exhausting! David wrote, “When I refused to confess my sin, my body wasted away, and I groaned all day long. 4 Day and night your hand of discipline was heavy on me. My strength evaporated like water in the summer heat” (Ps. 32:3-4 NLT). Solomon wrote, “People who conceal their sins will not prosper, but if they confess and turn from them, they will receive mercy” (Prov. 28:13 NLT). Have you had this experience? What was it like for you to constantly feel the fear and anxiety of eventually being exposed? Did every Bible study seem to focus on your hidden sin? Did your time in prayer constantly drift back to that hidden secret in your life?

It is a great relief to give up on our hypocrisy and lying. It feels good to live with a clear conscience, which is actually one of the central goals of the Christian life “clear conscience” (Acts 24:16; 1 Tim. 1:5; 3:9).

(2) We experience joy because we realize that we no longer have to work off our sin through good works. David wrote, “You do not desire a sacrifice, or I would offer one. You do not want a burnt offering. 17 The sacrifice you desire is a broken spirit. You will not reject a broken and repentant heart, O God” (Ps. 51:16-17 NLT). David deserved to die for his sin, but God forgave him instead (2 Sam. 12:13). This is why David could write so openly and insightfully about grace (Ps. 51:1-2, 7, 9-10; Ps. 32:5). As one pastor put it, “After his moral fall, David became a worse king… but he became a much better psalmist!”

(3) We experience joy because we are no longer controlled by our past. Many believers allow their past sins to haunt them. They live each day in a spiritual and moral deficit, operating out of guilt rather than grace. We’ve heard some people say, “I confessed my sin issue, but I still feel bad.” This is a sign that true repentance hasn’t fully taken root. Paul wrote, “Godly sorrow brings repentance that leads to salvation and leaves no regret, but worldly sorrow brings death” (2 Cor. 7:10 NIV). In his teaching on this topic, my friend Conrad Hilario said, “Regret ends where repentance begins.”

(4) We experience joy because we see how God can use this in other people’s lives. It’s funny how God can change us from people who want to hide our moral failings to those who are excited to share them for the benefit of others. This kind of transparency is a real-life demonstration of the power of God’s grace, and it often gives others the needed encouragement to get the healing and help with their own hidden problems.

We use the term “religious” in the sense of (1) trying to earn our salvation from God, (2) earn a self-righteous standing based on good works, or (3) earn a positive social status with others. All of these motivations are fatal for repentance. As we said before, we need to deliberately rip our eyes off of people (including ourselves!) and place them onto God and his grace. Here are some of the signs of religious repentance:

Outward conformity without inward change. At the heart of repentance is a change of heart. Any outward change without inward renewal will result in short-lived change, but not lasting growth. God can tell the difference between lip-service and a true change of heart. Isaiah wrote, “These people come near to me with their mouth and honor me with their lips, but their hearts are far from me” (Isa. 29:13 NIV).

Asking for quick fixes to remedy the problem. Instead of asking for people to spell out how to move ahead, repentance should begin with personal, inner convictions from God. It’s scary when someone claims to be repentant, but has no convictions on how to move forward. As spiritual friends and leaders, we should resist giving people hoops to jump through after a fall into sin. Instead, we should urge the person to turn to God and hear how he wants to direct them.

Agreeing on the wrongdoing, but not the solution. Judas definitely agreed with God that he had committed a heinous sin in betraying Jesus (Mt. 27:4), but this did not result in repentance—only further regret and remorse (Mt. 27:3, 5).

Minimizing, excusing, blame-shifting, or self-justifying. This was the great sin in the Garden (Gen. 3). Adam blamed his sin on Eve (Gen. 3:12), and Eve blamed her sin on Satan (Gen. 3:13). Both were pointing the finger at each other, but neither could point the finger at themselves. Human nature really hasn’t changed that much since then. Modern people follow in their footsteps. Consider a number of ways that people often minimize or excuse their sin:

“I’m sorry if you were offended by what I said.”

“I shouldn’t have shouted, but I was really tired from work.”

“Maybe I should have listened to you more.”

“I wouldn’t have done that if someone had come out with me that night.”

“I was overly critical toward you, but that’s just how I was raised.”

We should listen carefully to others (and ourselves) for qualifying language like this (e.g. “if” “but” or “maybe”). This isn’t just semantics: language like this shows signs of an unrepentant heart. Of course, other people may have contributed to our sin, but we are responsible for ourselves—not their contribution. Repentant people do not focus on the speck in someone else’s eye, but the log in their own (Mt. 7:3-5).

An inability to call something sin. Our culture has virtually lost the language of sin. Many people call their sin a “mistake” or an “error.” But this fundamentally flawed. A “mistake” is when you accidentally trip on your shoelaces, and an “error” is when you answer incorrectly on a test. A “sin” is a decision to be selfish toward people and operate independently of God. In order to find freedom from sin, we need to call it what it is.

How does your experience of repentance line up with the biblical picture expressed above? What are one or two aspects of repentance that jump out at you from the reading?

Listen to a teaching on the difference between Peter and Judas (like this one). What insights did you get from this teaching? How does this compare with your experience of repentance?

Appendix: History of the term Metanoia in Biblical and Extra-Biblical Greek

Sometimes, theologians equate the OT concept of “turning” (Hebrew shub or šûḇh) with the NT understanding of “repentance.” But interestingly, the Septuagint never translates the Hebrew word “turn” with the Greek term metanoia (but instead, with another word, epistropheo). In fact, in the 1,056 uses of the word shub in the Hebrew Bible, the Septuagint never once translates shub as metanoeo.[3] Goetzmann comments, “The NT does not stress the concrete, physical concept implied in the OT use of šûḇh, but rather the thought, the will, the nous [i.e. the mind].”[4] Though, Goetzman later adds that the NT usage is neither concerned “with a purely outward turning nor with a merely intellectual change of ideas.”[5]

This is important, because Lordship theologians generally try to make repentance synonymous with an outward moral change, rather than a change that begins first and foremost in the heart. We should confuse the fruit of repentance with the root of repentance.