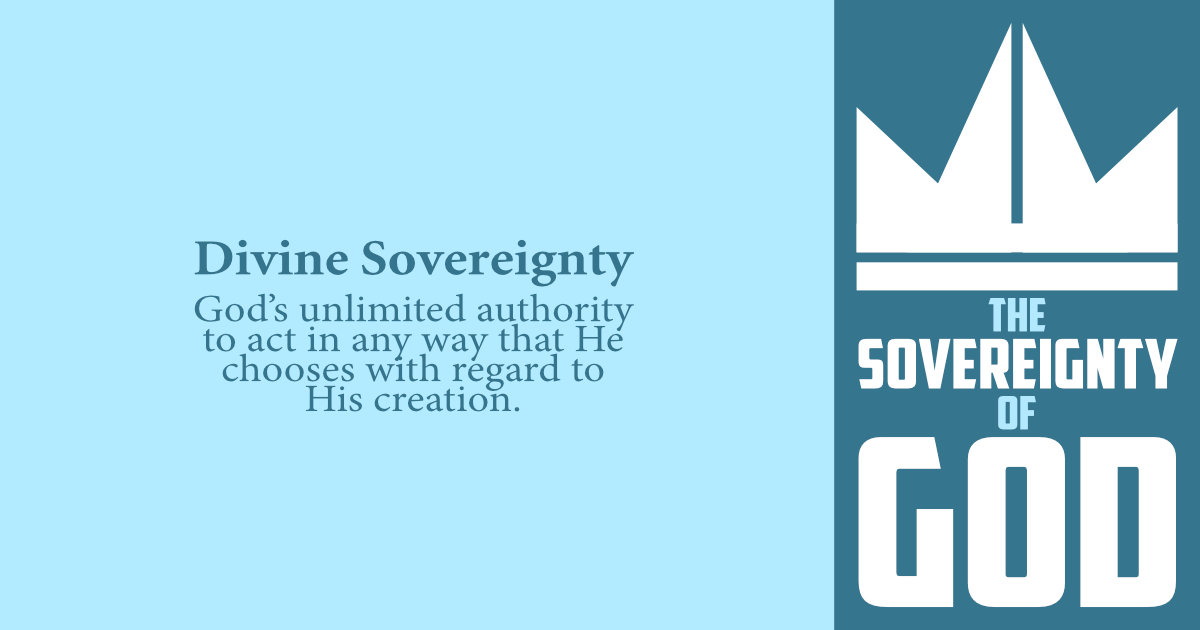 Sovereignty refers to God’s unlimited authority to act in any way that he chooses with regard to his creation. Nothing occurs without his decision to either cause it to happen or allow it to happen. God knows what will happen, and he is powerful enough to make it happen. We often say, “God is in control.” By this, we do not mean that God meticulously causes and controls every event in the universe. Rather, God governs his universe—either through direct commands or through his permissive will. Consider the definition of God’s sovereignty from several theologians:

F.H. Klooster in the Evangelical Dictionary of Theology (1984): “Sovereignty of God. The biblical teaching that God is king, supreme ruler, and lawgiver of the entire universe… The sovereignty of God thus expresses the very nature of God as all-powerful and omnipotent, able to accomplish his good pleasure, carry out his decreed will, and keep his promises.”[1]

Roger Olson (Arminian theologian): “Classical Arminianism goes far beyond belief in general providence to include affirmation of God’s intimate and direct involvement in every event of nature and history. The only thing the Arminian view of God’s sovereignty necessarily excludes is God’s authorship of sin and evil. Faithful followers of Arminius have always believed that God governs the entire universe and all of history. Nothing at all can happen without God’s permission, and many things are specifically and directly controlled and caused by God. Even sin and evil do not escape God’s providential governance in classical Arminian theology. God permits and limits them without willing or causing them.”[2]

A.W. Tozer: “God sovereignly decreed that man should be free to exercise moral choice, and man from the beginning has fulfilled that decree by making his choice between good and evil. When he chooses to do evil, he does not thereby countervail the sovereign will of God but fulfills it, inasmuch as the eternal decree decided not which choice the man should make but that he should be free to make it. If in His absolute freedom God has willed to give man limited freedom, who is there to stay His hand or say, ‘What doest thou?’ Man’s will is free because God is sovereign. A God less than sovereign could not bestow moral freedom upon His creatures. He would be afraid to do so.”[3]

Jerry Walls and Joseph Dongell (Arminian philosopher and theologian): “We are not seeking to establish human freedom at the expense of divine sovereignty; rather we are seeking to affirm God’s freedom to create whatever kind of world he desired, even a world whose every movement is not to be traced back ultimately to speciﬁc divine determination. If God has in fact chosen to create this kind of world, we neither glorify him nor magnify his sovereignty by insisting that he has created a world of a different sort.”[4]

God can intervene to override human freewill whenever he chooses. But from the limited examples in Scripture, this does not mean that he does this for all events. We might refer to sovereignty as the expression of God’s power. If God chose to not express his power or control, this would also be an expression of his sovereignty. Consider several biblical passages that affirm the sovereignty of God:

(Acts 17:26) He made from one man every nation of mankind to live on all the face of the earth, having determined their appointed times and the boundaries of their habitation.

(Ps. 139:16) Your eyes have seen my unformed substance; and in Your book were all written the days that were ordained for me, when as yet there was not one of them.

(Ps. 115:3, 16) Our God is in the heavens; He does whatever He pleases… The heavens are the heavens of the LORD, but the earth He has given to the sons of men.

If God is sovereign, why should we pray?

God’s sovereignty has plagued both believers and unbelievers for centuries. If God is really in control of all things, then why should we pray for anything? Atheistic comedian George Carlin explains it this way:

I say, ‘Fine, pray for anything you want… But, what about the divine plan? A long time ago, God made a divine plan. He gave it a lot of thought, decided it was a good plan, and put it into practice. And for billions and billions of years, the divine plan has been doing just fine. Now, you come along and pray for something. Well, suppose the thing you want isn’t in God’s divine plan? What do you want him to do? Change his plan? Just for you? Doesn’t it seem a little arrogant? It’s a divine plan! What’s the use in being God if every run down schmuck with a two dollar prayer book can come along and [email protected]#! up your plan? And here’s something else—another problem you might have: suppose your prayers aren’t answered. What do you say? ‘Well, it’s God’s will. Thy will be done.’ Fine, but if it’s God’s will and he’s going to do what he wants to anyway, why the [email protected]#! bother praying in the first place? Seems like a big waste of time to me. Couldn’t you just skip the praying part and go right to his will?[6]

God clearly commands us to pray, and the Bible teaches that prayer effects our world. James writes, “The effective prayer of a righteous man can accomplish much” (Jas. 5:16). He also writes, “You do not have because you do not ask” (Jas. 4:2). Therefore, it is clear that God will refrain from acting in many cases if we neglect to pray. But how does this square with God’s sovereignty? A number of observations can be made in this regard:

First, the real issue is not with affecting God’s will through prayer, but through any action. When we think about this, it’s odd that God would allow us to have any impact on his will. Yet the Bible clearly teaches human agency (Mt. 28:18-20; Acts 1:8; 1 Cor. 3:9; 2 Cor. 5:20; Rom. 10:14). It is certainly a mystery that God allows us to play a role in his plan. But once we concede this point, it shouldn’t surprise us that he has allowed us to play a role through the agency of prayer. C.S. Lewis explains,

In every action, just as in every prayer, you are trying to bring about a certain result; and this result must be good or bad. Why, then, do we not argue as the opponents of prayer argue, and say that if the intended result is good God will bring it to pass without your interference, and that if it is bad He will prevent it happening whatever you do? Why wash your hands? If God intends them to be clean, they’ll come clean without your washing them. If he doesn’t, they’ll remain dirty… however much soap you use. Why ask for the salt? Why put on your boots? Why do anything? We know that we can act and that our actions produce results… It may be a mystery why He should have allowed us to cause real events at all; but it is no odder that He should allow us to cause them by praying than by any other method.[7]

Second, prayer reinforces dependency, faith, and humility. By constantly having to return to God in prayer, we are repeatedly reminded that God is the one who is ultimately doing the work in our ministry—not us. Therefore, prayer isn’t for God’s sake; it’s very often for our sake. God knows that if he didn’t withhold blessing from us, we would never talk to him. In fact, we barely talk to him as it is! Pastor Chuck Smith explains:

Actually, I am the one often changed by prayer. Many times as I am praying God will speak to me. He will show me His way and His plan, which is always so much better than what I had in mind. While in prayer, God deals with me and shows me the folly of certain things that I have been insisting, and practically demanding, from Him. I respond, “Thank you, Lord, for not answering me during the last five years.” He knew what was best for me all the time! At this point in my life, as I look back, I am as thankful for the prayers He did not answer as those He did.[8]

Third, by praying, we are surrendering our freewill to God. We know that God respects us as persons, and he typically isn’t in the business of overriding our freewill. Thus when we pray, we are encouraging God to act, and we’re consciously getting on board with his will (Lk. 22:42). Theologian D.A. Carson wisely concludes,

We must remember that the Bible simultaneously pictures God as utterly sovereign, and as a prayer-hearing and prayer-answering God. Unless we perceive this, and learn how to act on these simul­taneous truths, not only will our views of God be distorted, but our praying is likely to wobble back and forth between a resigned fatalism that asks for nothing and a badgering desperation that exhibits little real trust.[9]

For more on this topic, see “How can God know the future without causing the future?”

Sovereignty implies that we are not in control of our lives and possessions. It is wrong for us to think that we have authority over our own lives or our own possessions, since all we have, and even our own selves belong to God.

Sovereignty is the key to dealing with anxiety. Many people dwell on what could go wrong in their lives (e.g. loved ones dying, getting sick, financial hardship, etc.), rather than trusting in the sovereignty of God (Mt. 6:34).

God can cause all things to the good, because he is sovereign. Look for God’s sovereign purposes in misfortune (Rom. 8:28; Gen. 50:20).