From the evidence, however, it seems that the Bible teaches a pre-tribulation rapture. Let’s consider a number of claims debated by post-tribulationists.

Consider a Jewish rabbi living two hundred years before Christ. If you had told him that there would be two comings of the Messiah, he would have laughed in your face! And yet, in hindsight, the OT does undoubtedly predict a suffering servant (Isa. 53; Zech. 12) and a conquering king (Dan. 7:13-14; Isa. 9:6-7). Likewise, there are multiple clues which indicate that the rapture and the second coming are two separate events:

First, there is no mention of the “church” from Revelation 4 until Revelation 22. If the church is present on Earth at this time, it is odd that it is not mentioned. Repeatedly, in Revelation 2-3, we read, “He who has an ear, let him hear what the Spirit says to the churches” (Rev. 2:7, 11, 17, 29; 3:6, 13, 22). But later, in Revelation 13:9, we read, “If anyone has an ear, let him hear…” There is a conspicuous difference between the two statements. One is directed to the church; the other is directed to anyone left on earth.

Second, both the OT and NT refer to the tribulation as an event in Israel’s future—not the Church. For instance, in the book of Revelation (ch. 4-19), Israel is mentioned in the tribulation—not the church. Jesus taught that there would be a temple in Israel (Mt. 24:15), and he spoke about the believers “in Judea” (Mt. 24:16). He also claimed that Jerusalem would be trampled underfoot “until the times of the Gentiles are fulfilled” (Lk. 21:24), which implies a Jewish regathering at this time. Jeremiah refers to this period as a time of “Jacob’s distress” (Jer. 30:7). Daniel 9:24-27 is given to “your people” and “your holy city,” rather than the church: The final seven years (the tribulation of Daniel 9:27) is given for Israel—not the church. The church was a mystery in the OT—not foreseen by the prophets.

Third, there are mortals who die off in the millennium. Isaiah writes, “For the youth will die at the age of one hundred and the one who does not reach the age of one hundred will be thought accursed” (Isa. 65:20). Under an amillennial view, Isaiah 65 refers to heaven—not the millennium. But how can people die at all in heaven? Clearly, Isaiah believed that people would die in millennium—not heaven. However, at the second coming, believers will all get “immortal” and “imperishable” bodies (1 Cor. 15:51-53). By contrast, non-believers will be judged and defeated by Christ. Paul writes, “They will not escape” (1 Thess. 5:3), and “They all may be judged who did not believe the truth” (2 Thess. 2:12). If believers are immortal and non-believers are killed, who can die in the millennial kingdom? Jesus taught that his second coming would result in non-believers being taken to judgment: “Just as the tares are gathered up and burned with fire, so shall it be at the end of the age. 41 The Son of Man will send forth His angels, and they will gather out of His kingdom all stumbling blocks, and those who commit lawlessness, 42 and will throw them into the furnace of fire; in that place there will be weeping and gnashing of teeth… So it will be at the end of the age; the angels will come forth and take out the wicked from among the righteous” (Mt. 13:40-42, 49; cf. Mt. 24:31, 39-41; Lk. 17:33-35). John writes that at the second coming “the rest were killed with the sword which came from the mouth of Him who sat on the horse, and all the birds were filled with their flesh” (Rev. 19:21). Isaiah writes, “[God] will exterminate its sinners from it” (Isa. 13:9). Paul D. Feinberg writes, “If all righteous are glorified before the Millennium and all wicked excluded from the kingdom, where do the people in non-glorified bodies come from to populate the Millennium?”[1]

Fourth, the rapture is imminent. Jesus taught that his second coming would be preceded by various specific signs (Mt. 24:4-34), making it non-imminent. However, the early church lived in the expectancy that Jesus could return at any moment. The church is told to watch for Jesus (1 Thess. 5:6; Titus 2:13; Rev. 3:3), but they are not told to watch for any signs. If Jesus comes to rapture the church before the signs, then this would still make his coming imminent (c.f. comments on Jn. 21:18).

Fifth, there are other dissimilarities between the rapture and second coming. Consider a number of examples:

-In the rapture, believers are resurrected during Jesus’ descent (1 Cor. 15:52), but in the second coming, they are resurrected after Jesus slays enemies, judges beast and false prophet, and binds Satan (Rev. 20:1-4).

Sixth, there are repeated allusions to the church being spared from the tribulation. For instance, in 1 Thessalonians, Paul begins by describing the rapture (4:13-18), then he describes the tribulation (5:1-9). If this is chronological, it implies that the church will be raptured before the tribulation. Paul writes, “For God has not destined us for wrath, but for obtaining salvation through our Lord Jesus Christ” (1 Thess. 5:9). Salvation (Greek sōtēria) is spoken of in multiple senses in the NT. Most of the time, it refers to being saved from hell. However, it also refers to being rescued from the perils of wealth (Lk. 19:9), the evil age (Acts 2:40), Egypt (Acts 7:25), or physical danger (Acts 27:34). The context in this passage is not the wrath of hell; it is the wrath of the tribulation. The tribulation period is spoken of as the “wrath of the Lamb” (Rev. 6:16; cf. Rev. 15:1; 3:10). 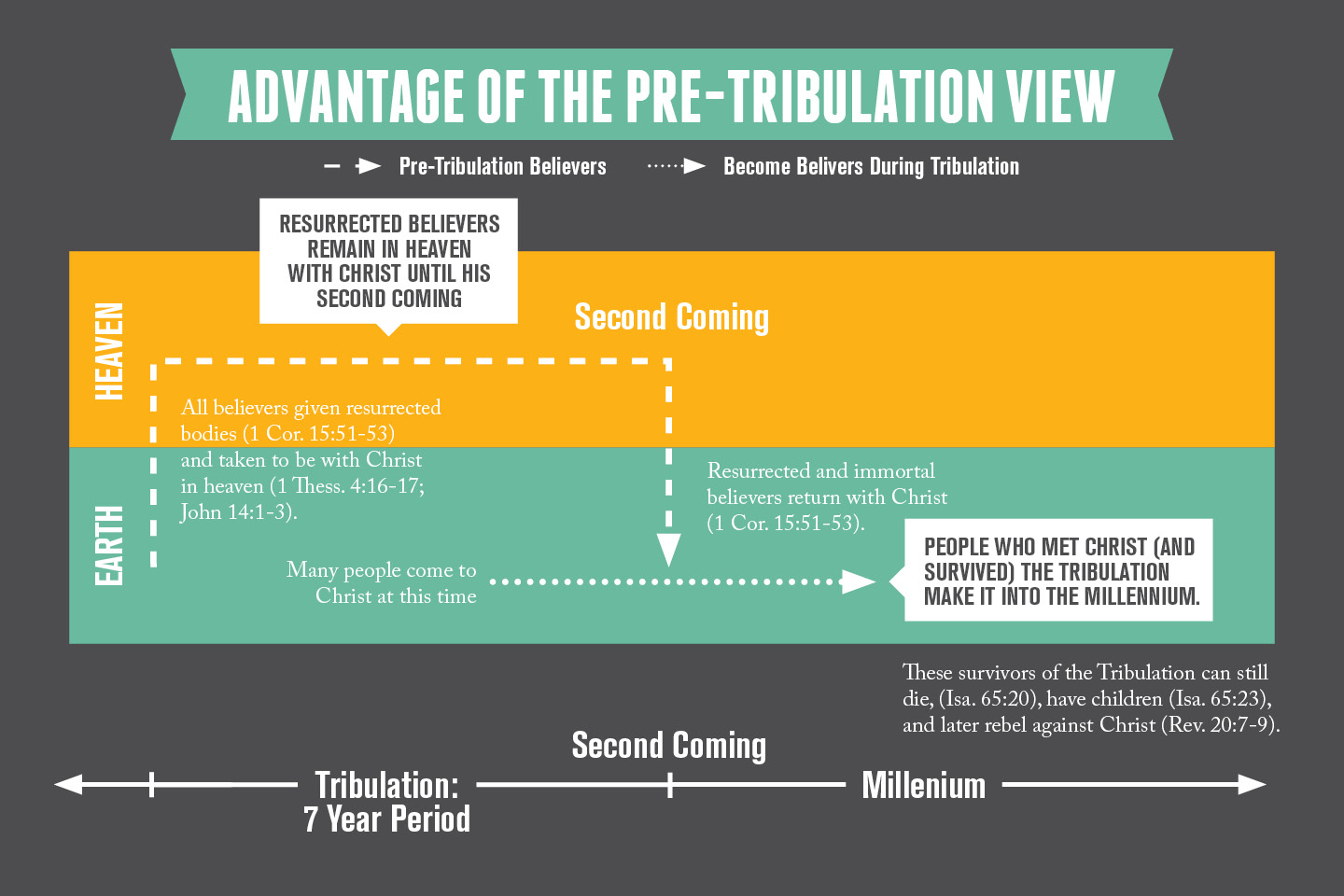 CLAIM #2: These apparent contradictions can be harmonized. For instance, perhaps we meet Jesus in the air (1 Thess. 4:17) only to follow him to the ground (Zech. 14:4). In the same way, the four gospels have apparent inconsistencies about the resurrection of Jesus, but these can be harmonized and clearly describe the same event.

CLAIM #3: Two key passages about the rapture also mention a trumpet (1 Thess. 4:16; 1 Cor. 15:52). In fact, 1 Corinthians 15:52 states that the rapture will occur “at the last trumpet.” The “last trumpet” of the book of Revelation occurs at the END of the tribulation.

It is doubtful that Paul is referring to the last trumpet of Revelation (in 1 Corinthians 15), because the book of Revelation wasn’t even written yet! In fact, it wouldn’t be written for another 40 years. It is more likely that Paul is drawing this imagery from the OT. In the book of Numbers, the trumpet referred to “summoning the congregation” of Israel to “gather themselves” together to “set out” (Num. 10:2-5). In Ezekiel, this was also used as a “warning” to the people (Ezek. 33:1-7), as it is in Jeremiah 6:17 (‘Listen to the sound of the trumpet!’ But you said, ‘We will not listen.’”).

Both symbols could be in view here. The rapture will be both a time of gathering for God’s people, and it will be a warning to the nation of Israel, who will remain on Earth. 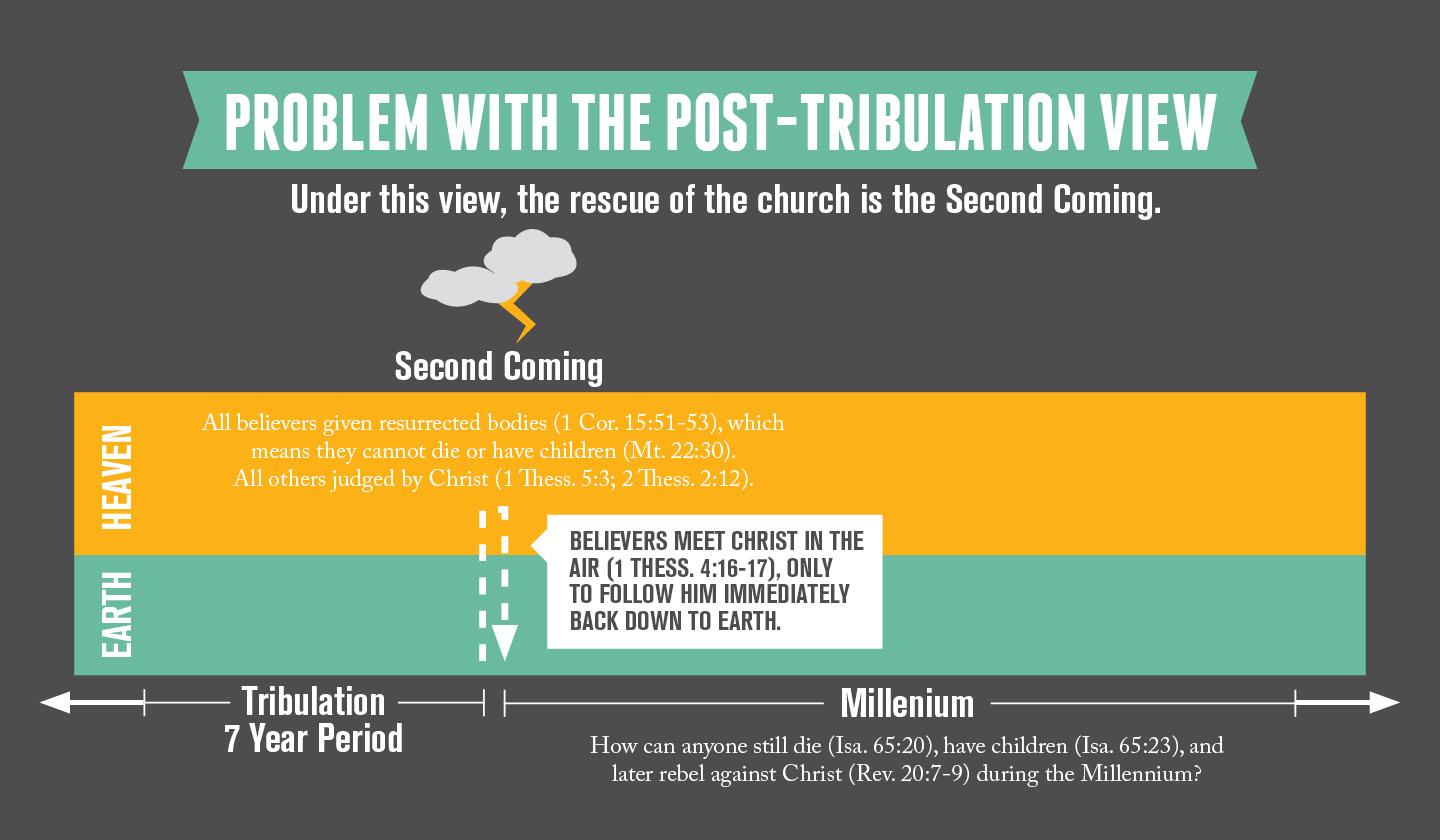 CLAIM #4: The doctrine of a pre-tribulation rapture is just wishful thinking. It reflects the soft, comfortable mentality of 21st century Christians in the West, who desire to avoid suffering and persecution.

Self-interest does not invalidate a biblical teaching. Consider if we applied this line of thinking to justification by grace through faith. An arguer could claim, “You only believe that we are justified apart from works, because it’s easier for you to deal with!” While it is true that salvation by faith is infinitely easier than works, this does not invalidate this biblical teaching. If we used this logic, we would need to throw out most of what the Bible teaches, because most of the Bible’s teaching is in our favor! If God does not want the Church to endure the Tribulation, then that is his prerogative. We shouldn’t seek to suffer beyond what he has called us to. However, because this teaching is uncertain, we should be content to suffer in the tribulation, if it turns out this way.

CLAIM #5: This teaching about a pre-tribulation rapture was invented by John Darby in 1830. No one even considered this before his time.

RESPONSE: There are multiple problems with this claim:

First, historically, this is not the case. Scholar Paul Benware writes,

As early as 1687, Peter Jurieu, in his book Approaching Deliverance of the Church (1687), taught that Christ would come in the air to rapture the saints and return to heaven before the battle of Armageddon. He spoke of a secret rapture prior to His coming in glory and judgment at Armageddon… More than a thousand years before Darby the writings of one known as ‘Pseudo-Ephraem’ (4th-7th century AD) spoke of the saints being removed from the earth and taken to be with the Lord prior to the judgments of the tribulation. He taught that there were two comings and that the church was removed before the tribulation.[3]

Second, the grammatical-historical hermeneutic was largely lost from the time of the early church fathers until the Reformation (4th to the 17th century). As believers were using the allegorical method, pre-tribulationism was impossible to discern (see “Hermeneutics”). However, once the grammatical-historical hermeneutic was recovered, it is no wonder that these truths emerged from the text. Thomas Ice writes, “It was impossible for a doctrine (the pretribulation rapture) to spring up in an environment lacking a necessary ingredient from which to build (premillennialism).”[4]

Fourth, time does not determine truth. Many heresies are old. Some orthodox teachings are new. Truth should not be determined by its age. Moreover, we might point out that this sword cuts both ways. Many people who hold this objection also hold to amillennialism or post-millennialism, which wasn’t articulated for hundreds of years after Christ. Our understanding of eschatology is more important today than it was several hundred years ago, because we are currently closer to the end than before. Perhaps, God—in his providence—waited for the church to approach the end before we were able to fully articulate this view.

Passages that relate to the rapture

[2] Moo writes, “If, indeed, these two are distinguishable in time, one would have expected many more differences than this. I could name several apparent inconsistencies in the Resurrection narratives of the Gospels—yet we know these all depict the same event. The failure to indicated more inconsistencies than those two suggests that it is not difficult at all to view the Rapture and Second Advent as part of a single event.” Moo Three Views on the Rapture: Pre-, Mid-, or Post-Tribulation? Grand Rapids, MI: Zondervan, 1996. 101.

[4] Thomas Ice “Why the Doctrine of the Pretribulational Rapture Did Not Begin with Margaret Macdonald” Bibliotheca Sacra (April-June) 1990. 167.