By Sara Bott and James Rochford

In their book Switch: How to Change Things When Change is Hard (2010), brothers Chip and Dan Heath outline key ways to lead change in a group.[1] To begin, they argue for finding “bright spots” in the group that are already working. Their main thesis is that leaders often overlook areas of health and success, when really they should try to replicate these “bright spots.”

Rather than looking for exotic and complex answers to problems, leaders should begin by looking at what is already working in their group. We often overlook “bright spots” within our own ranks. Leaders need to find areas of success within their group, and then, their job is to clone that success. Ask yourself, “What is working and how can we do more of it?”

The Rider, the Elephant, and the Path

After establishing a vision and the “bright spots” that lead to that vision, leaders still have a lot of work to do. To explain the process of leading change, Heath and Heath give a memorable analogy: A man riding an elephant down a path. In the illustration, Heath and Heath refer to three main components: (1) The “rider” refers to the rational aspects of the vision; (2) the “elephant” refers to the emotional and inspirational aspects of the vision; and (3) the “path” refers to the practical space in which the vision is carried out. 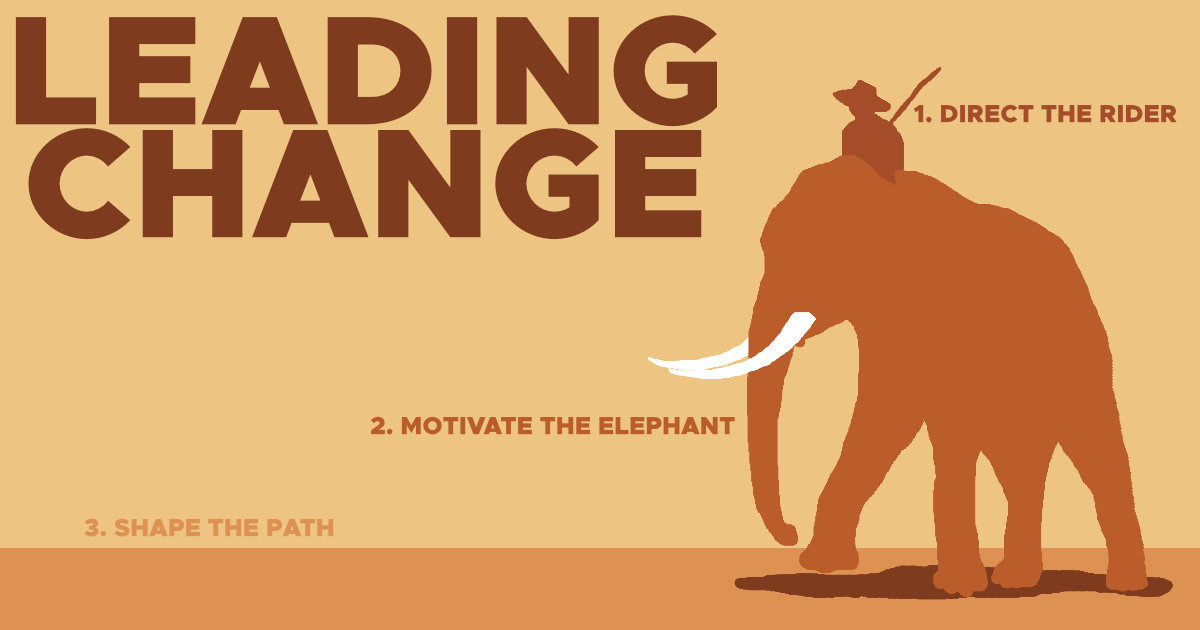 If the man is going to successfully ride a massive elephant, he will need to give it purposeful and intentional direction. Indeed, without a rider, the elephant will roam around aimlessly.

The same is true with leadership: Without direction, the group will run in circles. Hence, the first component in creating a vision is to “direct the rider.” This part of the analogy refers to giving clear, concrete, and step-by-step directions for achieving a goal or vision. This implies answering questions like, “Who, what, when, and where?” In other words:

At this stage, leaders need to appeal to the minds of those they lead: use persuasion, make good arguments, and engage the rational side of the vision.

A man cannot get an elephant to move unless that massive animal wants to move. The rider knows he cannot push the animal forward or pull him in a direction he doesn’t want to go. Instead, he needs to get the elephant to desire to move forward.

The same is true for leading others: We will become exhausted trying to get a group to move in a direction it doesn’t desire to go. So, what’s the solution? Heath and Heath refer to this as “motivating the elephant.” This refers to making an emotional appeal, offering inspiration, and showing the urgency of the vision. When sitting under this sort of teaching, listeners sense an inner desire to be a part of the vision, and also have an excitement about getting started or continuing the vision.

The man could have a good direction and an enthusiastic elephant, but he wouldn’t get far if the trail was blocked with trees or filled with mud pits. The man would need to “shape the path,” clearing out any major obstacles to let the elephant march through.

In leadership, we need to think through practical and environmental factors to make the vision to be practically easy to accomplish. Simple changes to the environment can make or break the vision from happening.

How does all of this practically work? Heath and Heath give a case study of this process by appealing to Jerry Sternin,[2] who went to Vietnam to battle malnutrition in poor villages. Sternin had no staff and minimal resources; also, he only had a six month timeline to accomplish his goal. Yet when he left, his program reached 2.2 Vietnamese and 265 villages, making a huge dent in malnutrition. How did he do it?

Sternin wasn’t an expert in the area of malnutrition. So, he went to the local villages, met with local moms, and had them weigh all the children in the villages to see if they were at a healthy weight. Most children were emaciated and malnourished, but a small percentage had a healthy weight. Consequently, Sternin explored why. He learned that the mothers of the healthy children served their kids shrimp and sweet-potato greens in their meals. Mothers typically avoided feeding their kids sweet-potato greens, because this was considered “low-class food” in this culture. Regardless, this “low-class food” was producing healthy kids!

Once Sternin realized this, his goal was to replicate what these mothers were doing to produce well-nourished children (i.e. “find the bright spot”). To do this, Sternin asked the mothers of the healthy children to host classes in small groups, giving step-by-step instructions on how to cook meals that led to their children having healthy weight (“direct the rider”). These mothers also showed the examples of the healthy children, providing hope for the other families (“motivate the elephant”). Consequently, Sternin’s approach was a huge success! Within six months of using this process, 65% of children made a healthy weight and stayed that way.

DISCUSSION: When leading change, what might happen if you only had two out of the three components listed above?

What would happen if you were missing DIRECTING THE RIDER?

Heath & Heath write, “What looks like resistance is often a lack of clarity.”[3] People might be inspired and motivated, but lack practical direction. Leaders could be hyper-critical of people—even though they have bought into the vision!

What might happen if you were missing MOTIVATING THE ELEPHANT?

What might happen if you were missing SHAPING THE ENVIRONMENT?

CASE STUDY: Building unity between guys and girls in a group

As your leadership team thinks through your group, you realize that unity between the guys and girls is at an all-time low. Communication is superficial; time-spent is lacking; friendships are non-existent. The group has all the makings of a middle school dance! As a result, your team decides to pursue a vision of building unity between the guys and the girls in your group. Here would be a way to put the principles above into practice:

Bright Spot: While it’s true that most guys and girls don’t interact, Ethan initiates regularly initiates quality conversations and quality time with Bri and Kate. In fact, Bri and Kate regularly talk about how encouraging this time is with Ethan.

Direct the Rider (Rational): Leaders need to help Ethan plan a night for the guys to serve the girls next week after men’s Bible study at 9pm. They might plan to cook a meal and give the girls encouragement letters at the guy’s house.

Motivate the Elephant (Emotional): Leaders might ask Ethan to share his burden to build friendships with the girls, and pray for the girls together.

Shape the Path (Practical): Leaders might set up a retreat where friendships can be created, and think through ways they could facilitate this on the trip.

Putting it into practice

Plan a vision: What vision do you have for your group right now?

Bright Spot: What areas of your group are already succeeding in this area?

Direct the Rider: What are some of the best arguments for your vision?

Specifically, what would we like to see people doing differently?

Which leader is going to be strong at delivering a persuasive case on this vision?

How do we want to roll this vision out to our group?

Motivate the Elephant: What is it about this vision that will excite and inspire people?

Which leader is going to be strong at delivering an inspiring vision for others?

How can we best use them to help this vision flourish?

Shape the Path: What are practical barriers that could stop this vision from happening?

As leaders, what environment could we create that would make it easy for people to carry out this vision?

Which leader would be particularly strong in overseeing this area?

How can we utilize each other’s strengths to see this vision become a reality?