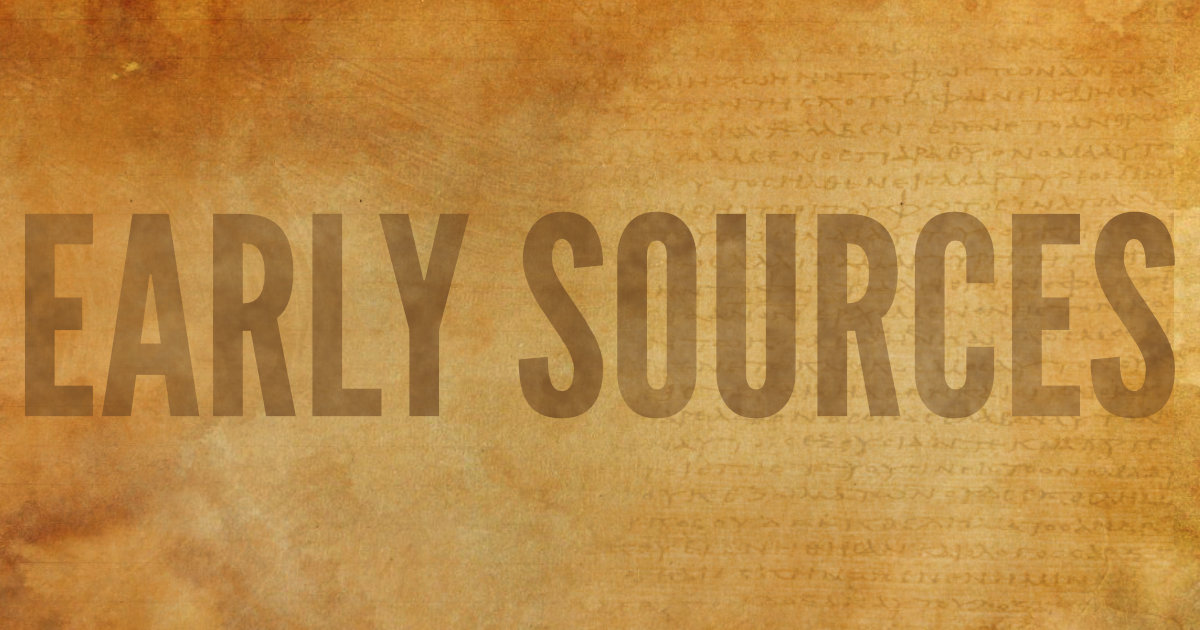 What about Tiberius Caesar?—the Roman emperor who ruled in the days of Jesus. Tacitus and Suetonius wrote the earliest biographies of Tiberius, dating to around AD 110-120, roughly 70-80 years after his death in AD 37.

What about Jesus of Nazareth?—a carpenter and rabbi from rural Galilee. Jesus has four biographies, which “most scholars”[1] date to the first century AD.

This is a little embarrassing for great men like Tiberius and Alexander! After all, they ruled empires and conquered countries, while Jesus never received a formal education, only had a three year public ministry, and lived with his mom until he was 30!

But in addition to the four gospels, we have an exceptional historical source that details the death, burial, resurrection, and appearances of Jesus. Historians of all stripes tell us that this short document that dates to within only the first few years of Jesus’ death. This document is found in 1 Corinthians 15.

Paul wrote to a community of Christians in Corinth, Greece in roughly AD 55. In chapter 15, Paul quotes from a very early statement of faith:

Paul wrote this letter to the Corinthians in AD 55, but he states that he “received” this material himself from an earlier period. Therefore, what we are reading is truly “pre-New Testament material,”[2] and even critical, atheistic historians date this section between 3 to 5 years after the death of Christ:

Gerd Lüdemann (atheistic NT professor at Göttingen): “The elements in the tradition are to be dated to the first two years after the crucifixion of Jesus… not later than three years.”[3]

Michael Goulder (atheistic NT scholar at the University of Birmingham): “[1 Corinthians 15:3ff] goes back at least to what Paul was taught when he was converted, a couple of years after the crucifixion.”[4]

Robert Funk (founder of the skeptical Jesus Seminar): “The conviction that Jesus had risen from the dead had already taken root by the time Paul was converted… The time for development was thus two or three years at most.”[5]

John Dominic Crossan (atheistic NT scholar): “[Paul] says in 1 Corinthians 15:3 that ‘I handed on to you as of first importance which I in turn received.’ The most likely source and time for his reception of that tradition would have been Jerusalem in the early 30s.”[6]

Richard Carrier (atheistic historian and Jesus mythicist): [A fellow skeptic asked Carrier to refute the claim that 1 Corinthians 15:3-8 is early…] “The answer is no… In fact the evidence for this creed dating to the very origin of the religion is amply strong; and there is no reasonable basis for claiming otherwise.”[7]

You might ask yourself why so many atheistic, non-Christian historians would date this passage so early. There are several reasons why:

First, Paul uses the language of “delivered” and “received.” Pharisees used this same language for transmitting sacred teaching. Before he became a Christian, Paul was a highly educated Pharisee (Phil. 3:5), and so he used this same language (Gal. 1:14).[8] At the very least, Paul claimed that he was passing on a message about Christ that someone previously gave to him.

Second, a number of expressions in this passage do not occur anywhere else in Paul’s writings.[9] Paul never uses the expressions “according to the Scriptures,”[10] “the third day,” or “the Twelve.”[11]

Third, this section contains careful structure and literary parallelism. Multiple times in this short section, Paul repeats the expressions “and that…” and “according to the Scriptures…” This might not be easy to see in our Bibles. But, if we rewrite 1 Corinthians 15 in a stanza, it becomes clear:

3 For I delivered to you as of first importance what I also received,

that Christ died for our sins according to the Scriptures,

4 and that He was buried,

and that He was raised on the third day according to the Scriptures,

5 and that He appeared to Cephas, then to the twelve.

6 After that He appeared to more than five hundred brethren at one time, most of whom remain until now, but some have fallen asleep;

7 then He appeared to James, then to all the apostles;

This structure implies that this was a short statement of faith that concisely outlined the basic beliefs and facts of the newly formed faith. For a more modern example, consider the Declaration of Independence. This has a similar literary structure, and it was written for the same purpose: to lay out the basic beliefs of the seceding colonies (“We hold these truths to be self-evident, that all men are created equal, that they are endowed by their Creator with certain unalienable Rights, that among these are Life…”).

Fourth, Paul used Peter’s Aramaic name—not his Greek name. The use of the Aramaic name “Cephas” (instead of Peter) supports an early origin, rather than a later dating.

Why do scholars date 1 Corinthians 15:3-8 so early after the Resurrection?

In his letter to the Galatians, Paul claims that Jesus appeared to him directly. Then, he writes, “Three years later, I went to Jerusalem to get to know Peter, and I stayed with him for fifteen days. The only other apostle I met at that time was James, the Lord’s brother” (Gal. 1:18-19 NLT). Since Paul came to faith roughly two years after Jesus was crucified, he must have gone to Jerusalem only five years after the resurrection occurred.

What were Paul and Peter talking about for these two weeks? The weather?[12] Not likely! Paul must have drilled Peter and James with questions about the historical Jesus. Remember, Paul never saw Jesus’ earthly ministry the way these men did. It only makes sense that Paul would’ve asked them a lot of questions about the historical Jesus during this short time. In fact, Paul uses the Greek word historesai (Gal. 1:18) to describe the intent of his trip. As you may have guessed, this Greek word refers “history” or “investigation.”[13]

Historians rightly believe that this is when Paul “received” this statement of faith. While Paul received the message of grace directly from Jesus (Gal. 1:12), he received additional historical details by investigating the other eyewitnesses (1 Cor. 15:3). Since we can date this event to five years after the resurrection, this dates this statement of faith before this time. We don’t know how early it was, but we do know that it couldn’t have been very late.

According to Oxford historian A.N. Sherwin-White, it takes at least two generations for legendary accrual to wipe out the core facts of a historical event.[14] While legends might creep into the peripheral details of an event in the first or second generation, legendary development does not eliminate the central historical facts. If this is true, then it would have been incredibly difficult for the resurrection to be a legendary development.

Furthermore, at the very least, this supports the historicity of the gospel accounts, especially because the apostles and their disciples were still alive when these accounts were written. This is why “the apocryphal gospels don’t appear until far into the second century and beyond.”[15] There simply wasn’t enough time for legendary elements to develop.

The fact that 1 Corinthians 15 dates to within just a few years of Jesus’ death demonstrates that Jesus’ death, burial, resurrection, and appearances were not late legends! These historical claims were recorded at the very outset of the burgeoning Christian movement.

[1] Ehrman dates Mark around 70, Matthew and Luke around 85, and John around 95 C.E. Bart Ehrman, Jesus, Interrupted: Revealing the Hidden Contradictions in the Bible (and Why We Don’t Know about Them). New York: HarperOne, 2009. 145.

[8] Gordon Fee writes, “The Hebrew words are qiḇḇēl/māsar, which appear in rabbinical literature. For example, the Mishnah states, ‘Moses received the Law from Sinai and committed it to Joshua, and Joshua to the elders, and the elders to the Prophets; and the Prophets committed it to the men of the Great Synagogue’ (m. Abot 1:1).” Gordon Fee, The First Epistle to the Corinthians (Grand Rapids, MI: Wm. B. Eerdmans Publishing Co., 1987), p.548.

[11] Paul normally uses the expression “the apostles,” but never “the Twelve.”

[12] Indeed, Cambridge NT scholar C. H. Dodd writes, “We may presume that they did not spend all their time talking about the weather.” C. H. Dodd, The Apostolic Preaching and Its Developments, 3d ed. (London: Hodder & Stoughton, 1967), p. 26.

[13] Licona writes, “The term may mean ‘to get information from,’ or ‘to inquire into a thing, to learn by inquiry.” Michael Licona, The Resurrection of Jesus: A New Historiographical Approach (Downers Grove, IL: IVP Academic, 2010), 230.

[14] Based on his study of legendary accrual in Herodotus, it takes more than two generations. A. N. Sherwin-White, Roman Society and Roman Law in the New Testament (Oxford: Clarendon, 1963), pp. 188-191.