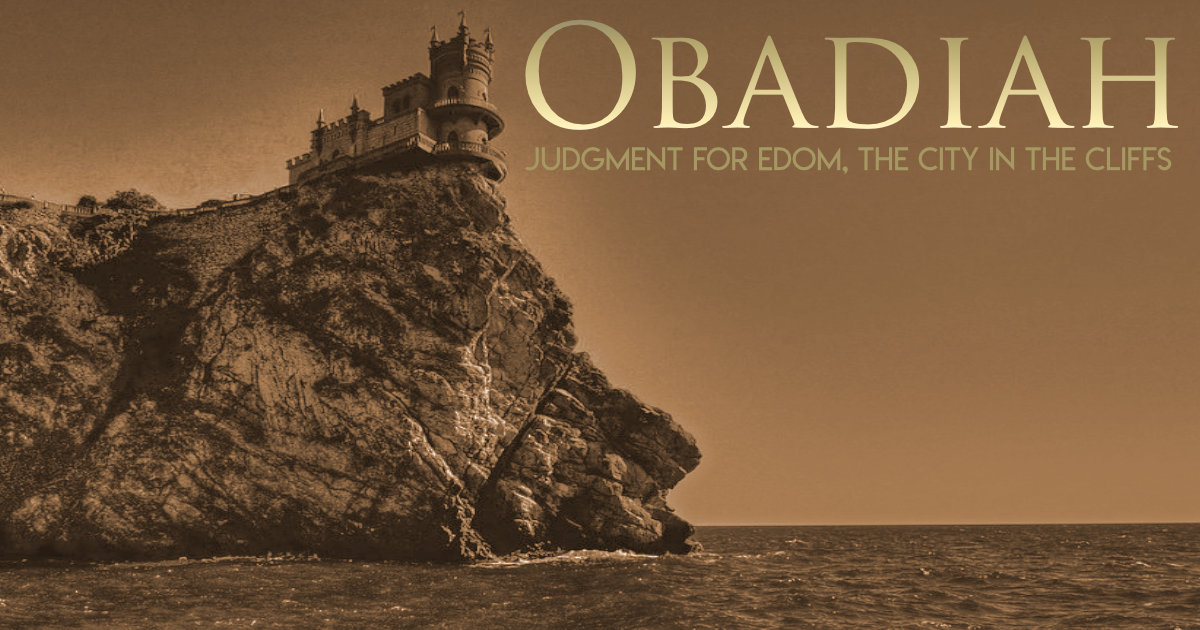 It is very difficult to know which Obadiah wrote this book, because “the name, which means ‘servant of Yahweh,’ is given to at least twelve other OT characters, none of whom seem obviously to be the author named in the book.”[1] Jeremiah 49 and Obadiah show a striking similarity to one another (Obad. 1-5; Jer. 49:9, 14-16). Who borrowed from whom? This is difficult to discern.

This is the shortest book in the OT, which makes it difficult to date. Some place it as early as the ninth century (under Jehoram) or as late as the sixth century (after the destruction of Jerusalem). Luther placed it in the sixth century, but Archer writes, “A good majority of the evangelical scholars of the nineteenth and early twentieth centuries have inclined toward a much earlier date, that of Jehoram ben Jehoshaphat, 848-841.”[2] It must have been written at least by the sixth century, because Edom was destroyed by then (Mal. 1:3-4; Ezek. 32:29).

The focus of the book is the destruction of Edom (v.1). The city of Edom was embedded in a mountain fortress, which seemed impenetrable. But in the seventh century AD, Edom was conquered by Muslim warriors (AD 636). Today, it is a place for tourists. It has never been rebuilt.[4] Obadiah gives this prophecy to Edom, because Jerusalem’s destruction is imminent. He warns them not to overdo Jerusalem’s judgment, or God will bring the same to them.

(1:1) The “we” refers to the prophetic community or the people of Israel in general.

The “envoy” (ṣîr) refers to an ambassador who was visiting the different nations, inciting them against Edom.[5]

This opening verse shows a relationship between God’s sovereignty behind Edom’s destruction, as well as the human responsibility of the nations who carried out the judgment.

(1:2) By making Edom “small,” God is showing that he is going to judge this nation.

(1:5-6) Even thieves leave something behind (usually by accident or out of haste), but God is going to completely obliterate Edom.

(1:8) The people of Edom thought that they were wise, but in reality, they were deceived.

(1:9) “Teman” refers to “the northern sector of Edom, though it is identified by some scholars as a city on the site of modern Tawilan, near Petra.”[7]

The judgment against Edom would be “forever.”

(1:11) When the foreigners came and sacked Jerusalem, the Edomites were like these enemies (“You too were one of them”).

(1:12-14) The Edomites had boasted and rejoiced when Israel/Judah suffered.

(1:15) The judgment of God was drawing “near” for the people. They would be judged based on what they did to others.

(1:16) The “drinking” seems to imply that they are spiritually deceived and “drunk,” so to speak.

(1:17-18) The people of Judah will escape God’s judgment, but not the people of Edom. The judgment is compared to a “fire” that leaves Edom in “stubble.”

(1:21) The day is coming when everyone will be able to see God’s “kingdom” on Earth.