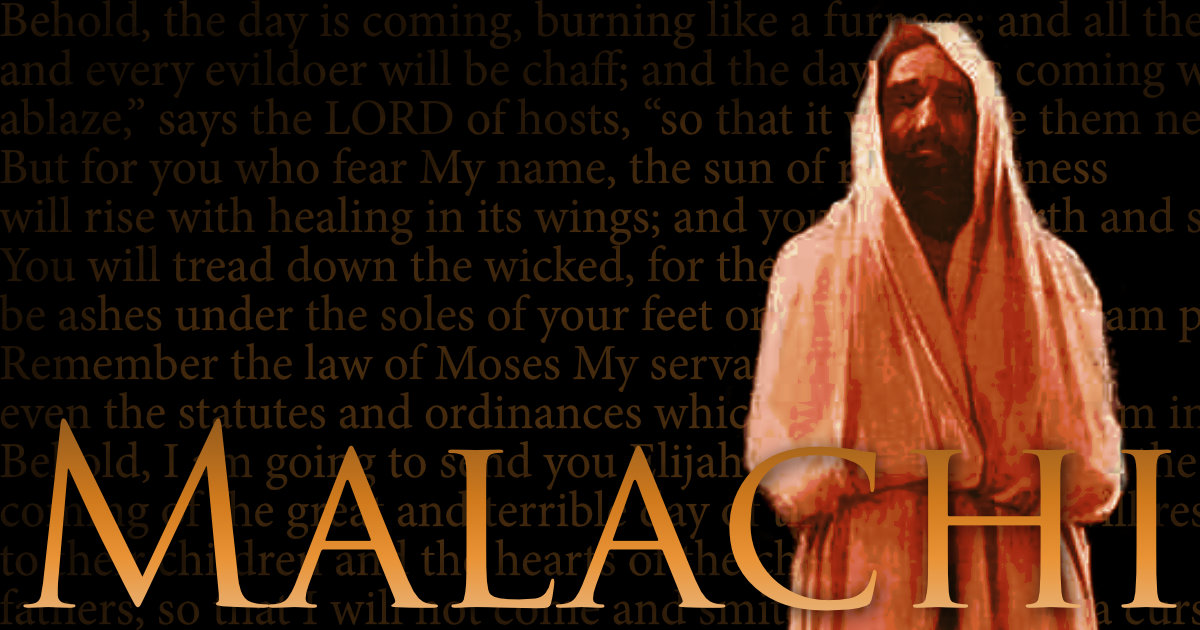 Malachi is the final book of the OT. As it was written, Israel had returned from Exile, and they had reformed the nation of idol worship. And yet, as Malachi wrote, the nation had turned to faulty, formalistic worship of God.

Scholars debate whether the word “Malachi” is a personal name (i.e. a proper noun) or a generic “messenger” (i.e. a common noun).

Arguments in favor of a GENERIC MESSENGER

The word Malachi (mal’akhi) literally means “messenger of Yahweh.” The Septuagint translated this as “his messenger,” rather than a personal name.[1]

The Targum of Jonathan states that Ezra actually wrote the book, and the 4th century church father Jerome agreed with this.[2]

The Talmud states that Mordecai wrote the book (Megillah 15a).

Arguments in favor of a personal name: MALACHI

Virtually all ancient Hebrew personal names had a meaning or translation. Thus, it shouldn’t surprise us to see a word that can be either a name or a common noun.

All of the prophets open their books with their names—not a generic title. If this is a common noun, then this would be the only example among the prophetic literature.

Later, Malachi uses the word to refer to a generic messenger in Malachi 3:1 (“I am going to send My messenger”). However, this usage later shouldn’t affect our understanding of this current usage.

Eugene Merrill summarizes, “Granting that the title reflects the name of the book’s author, this is about all that can be said on the matter. The prophet is named nowhere else in the Bible, and his own book says nothing more about him than the mere fact that the Lord spoke through him (1:1).”[3]

Malachi wrote in the fifth century BC. Archer dates the book to around 435 BC.[4] Merrill writes, “As for the date of the book, its canonical location and ancient Jewish tradition place it in the postexilic period (Baba Bathra 14b). More precisely, it is the last of the prophets and therefore postdates Haggai and Zechariah, both of whom ministered in the last quarter of the sixth century BC (see Hag. 1:1; Zech. 1:1).”[5] The Talmud usually groups Malachi with Haggai and Zechariah—other postexilic books (Yoma 9b; Sukkah 44a; Rosh Hashanah 19b; Megillah 3a, 15a).[6]

Malachi 1 (The priests brought awful sacrifices to the altar)

Summary: God promised to bless Israel, but curse the Edomites (v.4). The priests in Israel gave their second best to God (v.8), but God rejected their sacrifices (v.10). They had good sacrifices, but they kept them back for themselves (v.14).

The concepts of honor and respect are internal, heart attitudes (v.6). God begins with the object of their worship (i.e. Himself) before he deals with their actions.

This is like “cruise control” devotion versus a racecar driver.

(1:1) For comments on the name “Malachi,” see introduction above.

(1:2-3) The people began by questioning the love of God for them. God showed his love by choosing the nation over the Edomites. Alden writes, “In the fourth century b.c., the Nabataeans moved through Edom—driving the Edomites westward out of their centuries-old homeland—to the southern part of Judah. This area later came to be known as Idumea (cf. Mark 3:8).”[7]

The sins of the priests

In the OT, the priests represented God to the people, and the people to God (v.6). These priests “despised” God. In the NT, all believers are a kingdom of priests (1 Pet. 2:9), who represent God to the watching world.

(1:8) The priests weren’t giving their second best to God, but their leftovers to God (“blind… lame” animals). This was directly spoken against in the law (Deut. 15:21). God asks if their secular governor would accept sacrifices (taxes) like these. If not, how much more does Almighty God deserve?

(1:9) This offer is dripping with sarcasm on God’s behalf. God is basically telling these worthless priests that they shouldn’t expect anything from him.

(1:10) God wished that the rebuilt Temple would “go out of business.”[8] The Temple had become a lifeless meeting place for perfunctory and ritualistic religion. God wanted to shut the doors!

This is possible, though it strains the authorial intent of Malachi to understand these as referring to metaphorical sacrifices. Another alternative is that this will be fulfilled in the Millennial Kingdom, because the nations will stream to the Temple at that time.

(1:12-13) The priests accepted these awful offerings, but then they were disgusted by them. There may be a lesson here for Christian leadership—namely, you are what you allow.

(1:14) If God’s people won’t worship him, then he will seek out Gentiles to take their place. Of course, this doesn’t mean that the Jewish people will be permanently out of God’s place—only that they will be temporarily replaced.

(2:1-2) The priests weren’t taking God’s word to “heart.” This was external observances without internal heart change.

(2:4-6) God had a “covenant” with the Levitical priests, but they were now breaking it.

(2:9) God would bring judgment on these faulty priests.

(2:10) “Father” could refer to God or to Abraham—the “father” of the Jews. Regardless, the message is for the people to love each other, because they are all a part of the same ‘family’ of Jewish people.

(2:11-12) Instead of marrying fellow believing Jewish wives, the men were marrying foreign wives.

(2:13) The people were weeping profusely over the “altar” (v.13). Of course, this isn’t necessarily the literal altar, because the term for weeping is the same as the word for “flooding.” So, this is likely metaphor.

Summary: God predicts a forerunner to his visitation of the Temple. God promises not to destroy the nation (v.6). God gives a practical insight into repenting. The people should bring their giving to him (v.10). The people were saying that following God didn’t benefit them (v.14).

Notice the distinction between Yahweh speaking and the “Lord” entering the Temple.

(3:2-3) At the Second Coming, Jesus will purify the Levitical priests so that they will be valuable and precious like “gold” and “silver.”

(3:4) Alden understands these offerings to refer to “a cleansed and sanctified church.”[11] We understand this to refer to the third Temple at the end of history. After all, notice the language: “The offering… will be pleasing… as in former years.” In other words, the later sacrifices are directly compared to the earlier ones.

(3:5) All of these various types of sins and sinners spring from the final statement: “[They] do not fear me.”

(3:6-7) God is effectively saying, “You are the ones who changed—not Me!” The people (sarcastically?) ask how they can return to God.

(3:8-9) There are at least two different ways to steal: (1) taking something from someone else and (2) holding back what someone else deserves. Since the “tithes” supported the priests, the people were “robbing God” by not giving their money to the priests. Apparently, the whole nation was guilty of this crime (v.9).

This is markedly different than giving in the new covenant. The 10% tithe is only mentioned twice in the New Testament, and it never refers to a standard of giving for believers (Mt. 23:23; Heb. 7:8-10). Instead of a fixed 10% tithe, the New Testament teaches us to give under grace. Paul writes, “Each one must do just as he has purposed in his heart, not grudgingly or under compulsion, for God loves a cheerful giver” (2 Cor. 9:7).

That being said, we should point out that the average Evangelical Christian only gives 2.5% of their income. This is shocking to consider! Reflecting on this statistic, Randy Alcorn writes, “The Israelites were four times more responsive to the Law of Moses than the average American Christian is to the grace of Christ. (Reread the last sentence and ask yourself if something isn’t terribly wrong.)”[12] Instead of using the 10% tithe as a fixed amount, we should ask ourselves:

Ron Sider suggested what he called a “graduated tithe.” That is, as our income increases, we should increase the percentage of money that we give.

(3:10) The “storehouse” was the Temple. The way to change their problem was to start doing what was right. God was asking them to “test” his grace and generosity in blessing them.

(3:11-12) The goal of blessing the people with good crops was to serve an evangelistic purpose to the “nations.” Being happy and healthy was not an end in itself.

(3:13-15) The people were effectively saying that it was useless to follow God and his law. The righteous and the wicked seemed to get the same treatment after all (v.15).

(3:16) Apparently, some of the people repented and turned back to God. They wrote down these words to be a “remembrance” to them.

Malachi 4 (God will judge based on the Law and Prophets)

Summary: God reminds them to look to the Law of Moses (v.4). He promises that Elijah will return before the end (v.5). If the people reject Elijah, he will judge the people (v.6).

(4:2-3) The righteous will walk over the ashes of the wicked on the ground.

(4:4-6) The people are supposed to reflect on the “law and the prophets.” They should think about God’s Law given through “Moses.” They also should think what God will say through the prophet “Elijah.” Remember, Elijah was taken bodily into heaven (2 Kin. 2), so Malachi offers an explanation as to why: Elijah is coming back!