If the late-date of around A.D. 95-96 is accepted, a wholly different situation would prevail. The events in the mid to late 60s of the first century would be absolutely excluded as possible fulfillments.[1]

If the book was written after A.D. 70, then its contents manifestly do not refer to events surrounding the fall of Jerusalem—unless the book is a wholesale fraud, having been composed after the predicted events had already occurred… The burden for preterists then is to demonstrate that Revelation was written before A.D. 70.[2]

By contrast, if one is a futurist regarding the book of Revelation, one could hold to either the early date or the late date. Either view would still make Revelation future for the futurist. For instance, Zane Hodges is a futurist, who holds to the early date of Revelation.[3] Therefore, the dating of Revelation is relatively inconsequential for the futurist, but it is absolutely essential for the preterist interpreter. If Revelation is dated to AD 95, which has been the traditional dating for the last 1,900 years, then this would render preterism obsolete to Bible believers. 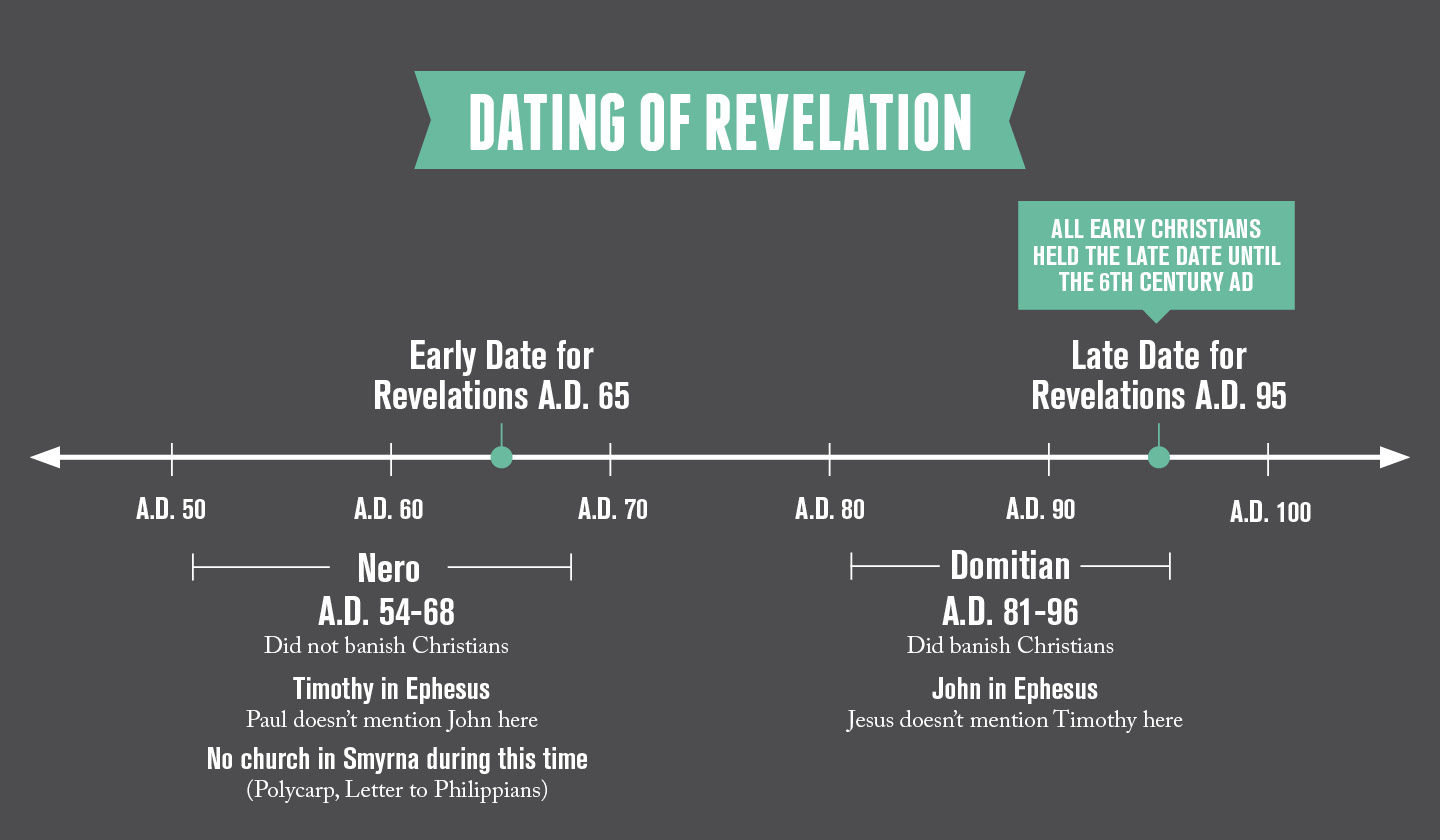 But if it had been necessary to announce his name plainly at the present time, it would have been spoken by him who saw the apocalypse. For it was not seen long ago, but almost in our own time, at the end of the reign of Domitian.[5]

However, two objections have been raised against Irenaeus’ straightforward assertion:

Some preterists argue that Irenaeus’ statement is not that clear. However, a number of counterarguments can be raised:[6]

First, all four English translations of Eusebius render Irenaeus’ expression clearly and without ambiguity. Moreover, none of these translations even contain a footnote or alternate reading for Irenaeus’ straightforward statement.

Second, the nearest antecedent to Irenaeus’ statement “it was not seen long ago” is “the apocalypse”—not John.

Fourth, none of the early Christian church fathers believed that Irenaeus’ statement was ambiguous. They all interpreted it to mean that John saw (and wrote about) his vision during the reign of Domitian. If Irenaeus is really so ambiguous, why didn’t the early church fathers think so?

Fifth, the first person to suggest a reinterpretation of Irenaeus was Johan Jakob Wettstein in 1752. Not surprisingly, Wettstein was a preterist. Thus no one before this time—for 1,600 years—ever felt that Irenaeus’ testimony was ambiguous, until the system of preterism was invented.

OBJECTION #2: Irenaeus was mistaken in his assertion.

Other preterists argue that Irenaeus erred when he made his assertion about the dating of the book of Revelation. Preterists point out that Irenaeus erred before in his writing, when he claimed that Jesus was forty years old when he died.[7] If Irenaeus could be wrong about so significant a fact, couldn’t he also be wrong about the date of Revelation? However, a number of counterarguments have been argued:

First, this statement from Irenaeus was not a historical blunder; instead, it was a misinterpretation of Scripture. Irenaeus believed that John 8 stated that Jesus must have been in his forties, when he died. But this was an interpretive error. What student of Scripture cannot be guilty of interpreting the Bible erroneously from time to time?

Third, Irenaeus lived in Smyrna, where Revelation originally circulated. Thus Hitchcock observes, “Irenaeus’ mistake about the length of Jesus’ earthly ministry, as discussed previously, was based on his misinterpretation of a particular biblical text; whereas, his information about the date of Revelation was evidently received directly from Polycarp. It is much easier to misinterpret a biblical text than to misunderstand direct verbal testimony from someone as respected as Polycarp.”[9]

Fourth, Irenaeus is typically very reliable in his historical testimony. Even early date advocates will speak of Irenaeus’ other testimony as typically “clear and weighty.”[10]

We do not have Tertullian’s original writing about the dating of Revelation. However, both Jerome[11] and Eusebius[12] interpreted Tertullian to be dating the book under Domitian.

In his work Roman History, Dio Cassius confirms the fact that Domitian was in the practice of banishing prisoners to islands. Hitchcock writes, “While Dio does not specifically mention John’s banishment during the reign of Domitian he does refer three times to Domitian’s practice of banishment. Dio even notes the release of exiles immediately after Domitian’s death. This secular testimony solidly corroborates the ecclesiastical tradition of John’s banishment under Domitian and liberation when Domitian died.”[13]

Victorinus wrote a commentary on the book of Revelation, and his commentary is, in fact, the oldest commentary that we possess. In it, he writes, “When John said these things he was in the island of Patmos, condemned to the labor of the mines by Caesar Domitian. There, he saw the Apocalypse; and when grown old, he thought that he should at length receive his quittance by suffering, Domitian being killed, all his judgments were discharged. And John being dismissed from the mines, thus subsequently delivered the same Apocalypse which he had received from God.”[14]

Eusebius writes, “If it were necessary that [the Antichrist’s] name should be declared clearly at the present time, it would have been announced by him who saw the revelation. For it was seen, not long ago, but almost in our generation, toward the end of the reign of Domitian. He states these things concerning the Apocalypse in the work referred to.”[15]

Summary of the External Evidence

Consider the evidence for the early and late date, side-by-side. Hitchcock observes, “The first clear, accepted, unambiguous witness to the Neronic date is a one-line superscription in two Syriac versions of the New Testament in the sixth and seventh centuries. If the Neronic date were the original date of Revelation, one would expect a witness to this fact in Asia Minor, where the book of Revelation originated, and a witness much earlier than the sixth century.”[16]

ARGUMENT #1: John’s ministry in Ephesus would overlap with Paul and Timothy.

If the early date is true, then John would have been leading in Ephesus at the same time as Paul and Timothy. Why would Paul leave Timothy in charge of this church, if the apostle John was there? Moreover, at the end of 2 Timothy, Paul mentions 17 coworkers by name, but John isn’t mentioned! Why wouldn’t he mention John? Why wouldn’t John mention Paul or Timothy in his writing to the church of Ephesus? (Rev. 2:1-7)

Polycarp—writing in AD 110—states that Smyrnaeans weren’t believers during the time of Paul.[19] Thus how could John write to a church that didn’t exist yet? While Acts 19:10 says that “all who lived in Asia heard the word of the Lord,” this doesn’t mean that a substantial church existed yet. Moreover, Paul never mentions a church existing in Smyrna in any of his letters, which is a conspicuous silence.

ARGUMENT #3: Paul writes of the church in Laodicea.

We date the book of Colossians to AD 60-61. Paul mentions a thriving church in Laodicea at this time (Col. 2:2; 4:13, 16). However, if Revelation was written in AD 65, then this church must have plummeted spiritually in just a few years. In fact, they had become so bad, that Christ threatened to vomit them out of his mouth! (Rev. 3:16) Of course, spiritual decline can occur quickly (Gal. 1:6), but which is more likely? A quick decline or a slower decline?

Tacitus mentions that the Laodiceans refused all aid from the Roman Empire.[20] By the time that Revelation was written, Laodicea was completely rebuilt. This would make sense of John’s comments that they “have need of nothing” (Rev. 3:16). This fits better with the AD 95 date. In fact, Hitchcock notes, “The archaeological evidence at Laodicea points to a thirty-year rebuilding process.”[21] He cites extensive research from primary historical sources, Colin Hemer’s extensive historical research, and modern day archaeological discoveries to support this conclusion.

John tells us that he was banished to Patmos (Rev. 1:9). Does this fit better with the early date or the late date? While Nero did practice banishment, he executed Peter and Paul, rather than banishing them. Nero never banishes Christians, but Domitian is said to have banished another believer: Flavia Domitilla. She was banished in AD 95 to the island of Pandeteria. She was also released by Nerva—the same as John. Craig Blomberg writes, “John’s brief exile on the island of Patmos (1:9) fits the mid-90s well, whereas there is no evidence of Christians being banished from their homelands by the government prior to this date.”[22]

What about the mention of the Temple in Revelation 11?

John speaks about the existence of the Jewish Temple in his book (Rev. 11:1-2). Preterist interpreters argue that John had no knowledge of the destruction of the Jewish Temple (which occurred in AD 70). For this reason (they argue), this book must have been written before AD 70.

First, John claims to be writing prophecy—not history. In Revelation 1:3, John says that his book is a work of “prophecy.” The repeated expression “And I saw…” occurs 44 times throughout the book. For John to write about the past destruction of the Temple would be out of line with the genre of the book. Moreover, Jesus explicitly commands John: “Therefore write the things which you have seen, and the things which are, and the things which will take place after these things” (Rev. 1:19). If John decided to write about the past, then he would be disobeying Jesus’ command here.

For more on the Temple, see comments on Revelation 11:1.

Why didn’t John mention the destruction of Jerusalem?

Preterists argue that it is bizarre that John would fail to mention the destruction of Jerusalem, if he was writing in AD 95. Jesus’ prediction of the destruction of Jerusalem was an excellent apologetic for supporting the veracity of Christ’s claims. Preterists argue why John would fail to point this out in his letter. However, a number of counterarguments can be made:

First, the original audience was ethnically and geographically different than Jerusalem. When we look at the churches in Revelation 2 and 3, these are all Gentile churches—not Jewish believers. They were 800 miles from Jerusalem.

Second, the original audience was chronologically different than Jerusalem. If the late date is true, then the destruction of Jerusalem would’ve been 25 years in the past.

Hitchcock, Mark. “A Defense of the Domitianic Date of the Book of Revelation.” Found here.

Hank Hanegraff versus Mark Hitchcock Debate: The Date of Revelation.

[6] We are greatly indebted to Mark Hitchcock for all of these arguments. See Hitchcock, Mark. “A Defense of the Domitianic Date of the Book of Revelation.” Dissertation for Dallas Theological Seminary. December 2005. 24-28.

[8] Hitchcock, Mark. “A Defense of the Domitianic Date of the Book of Revelation.” Dissertation for Dallas Theological Seminary. December 2005. 33.

[9] Hitchcock, Mark. “A Defense of the Domitianic Date of the Book of Revelation.” Dissertation for Dallas Theological Seminary. December 2005. 33.

[13] Hitchcock, Mark. “A Defense of the Domitianic Date of the Book of Revelation.” Dissertation for Dallas Theological Seminary. December 2005. 33.

[16] Hitchcock, Mark. “A Defense of the Domitianic Date of the Book of Revelation.” Dissertation for Dallas Theological Seminary. December 2005. 74.

[17] Hitchcock, Mark. “A Defense of the Domitianic Date of the Book of Revelation.” Dissertation for Dallas Theological Seminary. December 2005. 73.

[18] Hitchcock, Mark. “A Defense of the Domitianic Date of the Book of Revelation.” Dissertation for Dallas Theological Seminary. December 2005. 177.

[21] Hitchcock, Mark. “A Defense of the Domitianic Date of the Book of Revelation.” Dissertation for Dallas Theological Seminary. December 2005. 187.