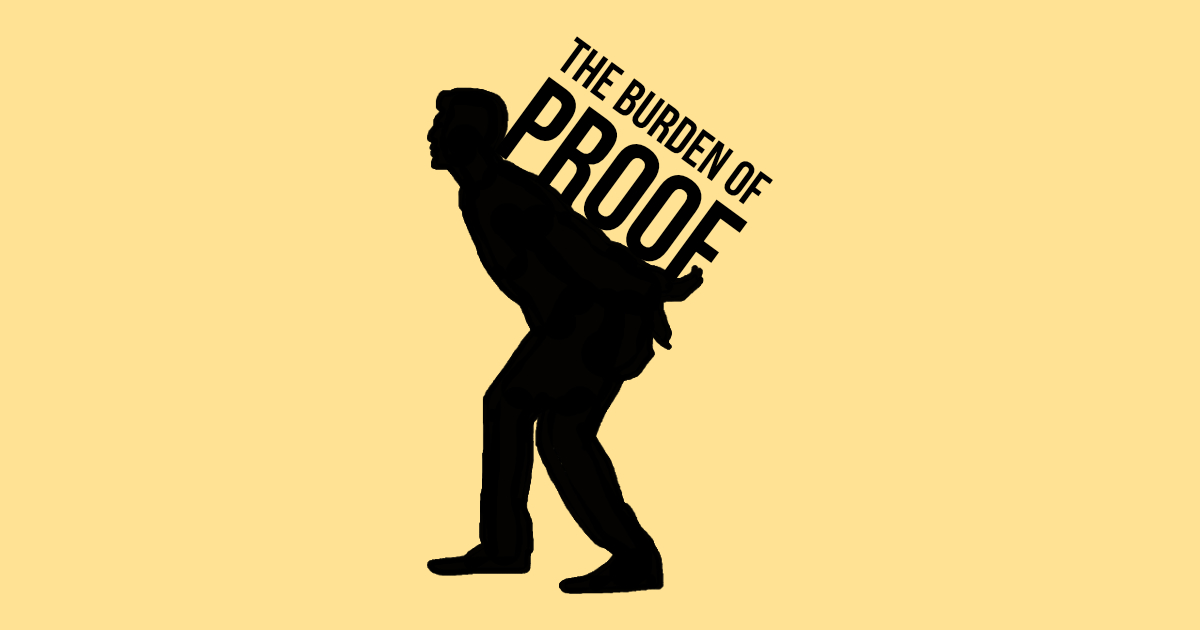 To determine who bears the burden of proof, we need to identify who is making a positive truth-claim. If you are not making any kind of claim, then your opponent needs to bear the burden of proof. In the case of the coin flipping, both people are making a claim about the coin; therefore, they both need to offer arguments for their position. In the same way, when debating the existence of God, both atheists and theists are making a claim about God. Regarding the existence of God, you have three options: (1) affirm, (2) deny, or (3) withhold judgment:

(1) Affirm: The theist is affirming the existence of God.

(2) Deny: The atheist is denying the existence of God.

Since atheists are making the claim that God does not exist, then they need to offer evidence for that claim. As you can see above, atheism is not the “lack of a belief in God.” This is agnosticism. Instead, atheism is the positive assertion that God does not exist. If atheism is merely a “lack of belief in God,” then on this redefinition, babies are atheists because technically they lack a belief in God! Or as philosopher William Lane Craig has argued, his cat is technically an atheist on this definition. The same would be true for infants and the mentally disabled. But is this really what we mean when we use the term “atheist”? Of course not. Atheism is not merely a psychological state of mind; it is a philosophical position that is defensible. Consider the various ways that philosophers have defined “atheism” in the philosophical literature:

Cambridge Dictionary of Philosophy (1995): “[Atheism is] the view that there are no gods. A widely used sense denotes merely not believing in God and is consistent with agnosticism. A stricter sense denotes a belief that there is no God; this use has become the standard one.”[1]

Blackwell Dictionary of Western Philosophy (2004): “Atheism: Philosophy of Religion [from Greek a, not + theos, God, the absence of belief in God]. The belief that God—especially a personal omniscient, omnipotent, benevolent God—does not exist.”[2]

Stanford Encyclopedia of Philosophy (2011): “Atheism means the negation of theism, the denial of the existence of God.” Found here.

Repeatedly, we see that both philosophical theists and atheists define atheism not merely as the lack of belief in God, but rather, as the rejection or disbelief in God.

This redefinition of atheism is a slick maneuver performed to elude the need to share the burden of proof. If an atheistic debater can set up the definition of atheism in this way, then he makes atheism the default position. This word play is disingenuous, however, because it fails to take an honest position. Imagine if theists redefined their position to say, “I lack belief that there is a godless universe, so you bear the burden of proof to prove that there is no God.” This kind of word play is really a distraction. Does God exist or not? Let’s cut the confusing language, hear both sides, and weigh the evidence.

If atheists do not bear the burden of proof, then why write books about atheism? Are we really to believe that Richard Dawkins is writing 400 page books about how he doesn’t have a position regarding God’s existence? Of course, he is convinced (and making a case) that God does not exist; he is not merely withholding judgment. If he merely “lacks belief in God,” then he needs to change the title of his book from The God Delusion to The God Decision or The God Discovery or The God I’m Not Sure Exists.

We need to be willing to judge claims based on the evidence—not just denying claims a priori. To illustrate, imagine an ultra-skeptic who didn’t want to be duped by any false claims. So he simply didn’t believe in any truth-claim for his entire life! When he died, no one had ever fooled him of anything. By contrast, consider the ultra-believer who didn’t want to miss out on believing any truth-claims. So he simply believed every claim he heard for his entire life! This way, when he died, he had been able to believe the maximum number of true claims. Of course, both options are not good options for thinking people. Instead, we should judge truth-claims based on the evidence—not ultra-skepticism or ultra-gullibility.

Of course, there is very good evidence for belief in God. But we need to establish the rules of the debate before we consider this evidence. Otherwise, the debate will be unfairly advantaged from the start in favor of atheism. Atheists often picture theists as saying, “Since x cannot be disproved, therefore x should be believed.” But this is not what theists are arguing. Instead, we want an equal playing field in discussing and debating the evidence for and against the existence of God.

Paul Copan “Atheism and the Burden of Proof”