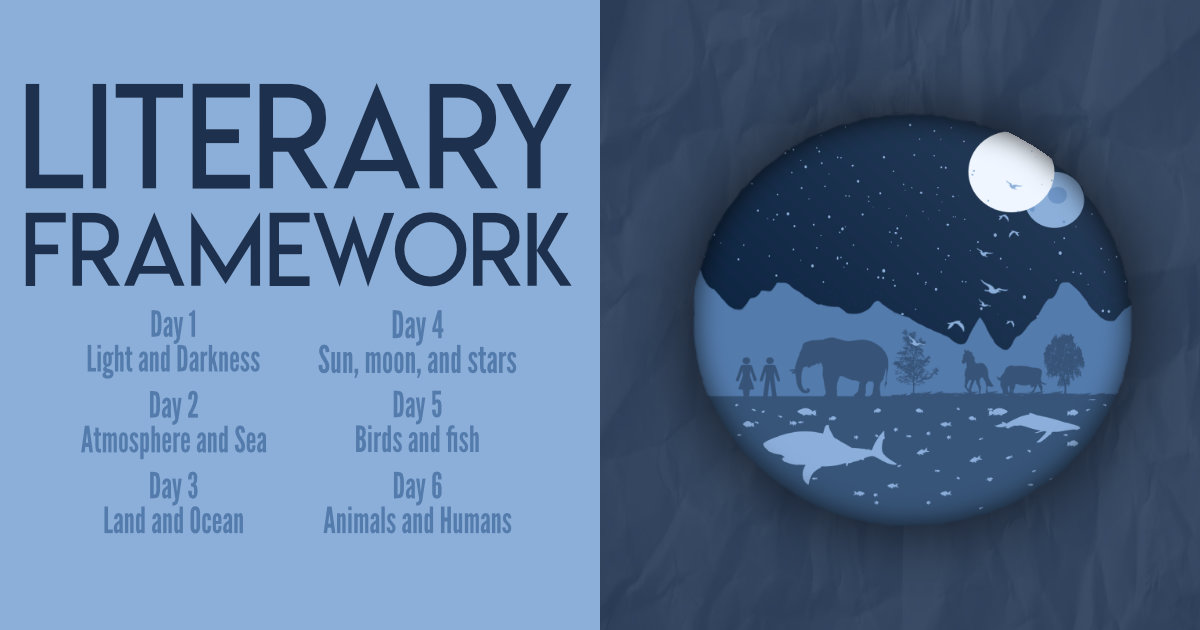 The Literary-Framework Interpretation dates at least as far back as 1924 from Professor Arie Noordzij of the University of Utrecht.[1] More recent proponents include Gordon J. Wenham,[2] Meredith G. Kline,[3] Henri Blocher,[4] and Bruce Waltke.[5]

The Literary-Framework view claims to be a historical account of creation. Kline writes, “Gen 1-11 is not mythological but a genuine record of history… The material in these chapters is unquestionably interpreted by inspired writers elsewhere in Scripture as historical in the same sense that they understand Gen 12-50 or Kings or the Gospels to be historical.”[6]

However, this perspective holds that Genesis 1 is arranged around a literary framework. Thus Genesis 1 explains God’s creation topically—not sequentially or chronologically. Kline writes, “The scheme of the creation week itself is a poetic figure” and “the several pictures of creation history are set within the six work-day frames not chronologically but topically.”[7] Blocher goes so far as to say that “chronology has no place here.”[8]

What is the literary arrangement? Proponents of this view believe that Genesis 1:2 gives us this literary framework: “The earth was formless and void.” Thus, Days 1-3 deal with the “formlessness” of the Earth, while Days 4-6 deal with the “void.” Bruce Waltke explains,

The first triad [Days 1-3] separates the formless chaos into three static spheres. In the second triad [Days 4-6], the spheres that house and shelter life are filled with the moving forms of sun, moon, and living creatures. The inhabitants of the second triad rule over the corresponding spheres: the sun and the moon rule the darkness, while humanity (head over everything) rules the earth.[9]

This perspective could be summarized as follows:

Advocates of this perspective further argue that literary devices show us that Genesis 1 shouldn’t be read chronologically. Gordon Wenham notes that day three and six both have the expression “And God said” twice, showing parallelism.[10] Moreover, he notes that the first verse relates to the last verse of this section too—both mentioning “God,” “create,” and “heavens and earth.” He also adds that we can detect literary devices in the “use of repeating formulae, the tendency to group words and phrases into tens and sevens, literary techniques such as chiasm and inclusio, the arrangement of creative acts into matching groups, and so on.”[11]

Do proponents of the Literary-Framework View teach theistic evolution?

Some do, and some don’t.

Meredith Kline firmly rejects theistic evolution, holding to a special creation of Adam. In Genesis 2, he believes that the literary framework moves to a more straightforward historical chronology. Therefore, special creation is in view. He writes,

The creature thus animated was not previously alive and it was nothing short of man, the image of God, that now by this immediate divine action first became a living being (cf. 1 Cor 15:45).[13]

Paul understood this record of the woman’s origins as straightforward history… Following that direction in the exegesis of Gen 2:7 particularly, we find ourselves led away from any theoretical reconstruction in which the creative act that produced Adam is attached organically to some prior life process evolving at a sub-human level.[14]

Bruce Waltke, on the other hand, believes that the literary-framework interpretation allows for theistic evolution. He contends that Scripture and Science are simply answering two different sets of questions, and therefore, they do not conflict with one another.[15] In his recent work An Old Testament Theology (2011), he writes, “The best harmonious synthesis of the special revelation of the Bible… and of science is the theory of theistic evolution.”[16] The only “direct creation” was giving Adam his image and spiritual component.[17]

Advocates of the literary-framework do not believe that the details of the narrative are important. Instead, the purpose is that God is the Creator. As Waltke writes, “The narrator’s concern is not scientific or historical but wishes clearly to establish that it is God who has created all and has dominion over all, including the seas, sun, and moon.”[18] He explains that the purpose of the creation account is so we can imitate the Creator’s work. His purpose is merely to show that “God created the earth and that it is all very orderly.”[19] Furthermore, the creation week exists for the purpose of explaining the Sabbath (Ex. 20:9-11).

Critique of the literary-framework interpretation

First, the waw-consecutive implies historical prose narrative. The repetition of this Hebrew literary device (“and… and… and…”) implies historical prose and succession. This makes the Hebrew verbs in the wayyiqtol tense (by adding a waw to the beginning). This verbal form describes a succession of past actions. It expresses “actions, events, or states, which are to be regarded as the temporal or logical sequel of actions, events, or states mentioned immediately before.”[21] The ordinary usage of this grammatical form “in narrative is to denote discrete and basically sequential events, with the progression of numbered days.”[22] This strongly implies chronological progression—not topical arrangement.

Third, the literary-framework view favors poetic devices over historical narrative. Genesis is history—not poetry. Edward Young writes, “Genesis one is written in exalted, semi-poetical language; nevertheless, it is not poetry. For one thing the characteristics of Hebrew poetry are lacking, and in particular there is an absence of parallelism.”[25]

Advocates of the literary-framework view argue that the gospel of Matthew is fully historical, and yet, it does not portray the life of Jesus chronologically—but topically. For instance, Matthew compresses many of Jesus’ miracles in chapters 8 and 9, while the other gospels arrange these in different order. Furthermore, at certain points, Luke may have written his gospel with a logical structure, rather than a chronological ordering.[26] Other non-chronological passages abound in Scripture (2 Kin. 23:4-10; Ps. 78:44 ff.; Mt. 4:1-11; Lk. 4:13, 16-30; Mt. 13:53-58).

Fourth, the parallels between the days do not always line up. If similarities argue for a topical reading, then dissimilarities should be evidence against such a reading. Consider a few examples of the dissimilarities in this framework view:

We believe that we should distinguish between a bad view, and a false view. We agree with Grudem who writes that the literary-framework view “does not deny the truthfulness of Scripture.” However, “it adopts an interpretation of Scripture which, upon closer inspection, seems very unlikely.”[29]

[27] Matthew uses a framework of 14 generations in his genealogy of Jesus—from Abraham to David, from David to the Exile, and from the Exile to Jesus (Mt. 1).